With state funding coming to an end, Ghana’s Agricultural Development Bank is reorganising to meet the agricultural sector’s needs more effectively – stepping up its strategy of specialisation, creating new products, strengthening its branch network. Growth is happening and agricultural loans are advancing at a remarkable pace.
For the bank, however, finding additional financing is crucial in order to expand its activities.

The main object of the Agricultural Development Bank (ADB) was to provide medium- and long-term financial intermediation and related services to the agricultural and agro-allied sectors in order to make agriculture attractive through modernising its operations; create employment, especially rural employment; provide raw materials for local industries; provide foreign exchange; and improve the living standards of those in the sector. Initially, funding was largely provided by government and multilateral development banks, mainly the World Bank, the European Development Fund, and donor agencies such as USAID. This was on-lent to farmers to finance agricultural projects in the areas of poultry, rubber, oil palm production and processing, and fishing. Funds were used for land preparation, importation of plant and equipment, and working capital. Investments resulted in the commercialisation of agricultural products and by-products, and in transforming several small-scale enterprises into medium-scale enterprises, providing the foundation for Ghana’s industrial and socio-economic growth. With the eventual abolition of government funding, the bank had to expand its branch network, mobilise additional deposits, and source funds from multilateral development banks, mainly the African Development Fund (AfDF), the African Development Bank (AfDB), and the World Bank.

Foreign exchange losses (due to financial sector reforms), loan defaults, removals of subsidies on agricultural inputs, and production-related losses led to the rapid deterioration of the bank’s overall credit portfolio. This resulted in its re-capitalisation in 1990. This, coupled with the lifting of restrictions on banks to lend at least a quarter of their lending portfolio to the agricultural sector increased pressure on the ADB (with its mandate to finance agriculture) for short-, medium- and long-term agricultural investments.

The ADB began to restructure its business model in 2009 due to its systemic operational uncompetitiveness within the dynamic national and international financial environments. Its restructuring was informed by a three-year corporate strategic plan, aimed at ensuring that the ADB’s operations were consistent with modern universal banking practices, in order to meet the requirements of increasingly enlightened investors, customers and shareholders.The restructuring entailed re-aligning the bank’s departments and business units to enhance customer satisfaction, comply with industry best practices, and achieve profitability. A new management team was also recruited to actualise the strategic plan and create new strategic business units such as corporate, retail, development finance, transaction banking, and technology. Consequently, rolling out new products was consistent with universal banking functions and was responsive to the needs of agricultural investors.

The ADB also expanded its branch network in an effort to bring banking services closer to investors, particularly those engaged in agriculture and agro-based industries. Since June 2010, 22 new branches have been opened (bringing the total network to 91 branches) in largely rural, agriculturally active communities, corridors and commercial centres with potential for agricultural production.
Since restructuring, the growth of the bank’s balance sheet has been impressive, with total net credits growing from GHS 372.86 million (EUR 186 M) in 2009 to GHS 576.99 million (EUR 288 M) in 2010. Over the same period, lending to the agricultural sector climbed from GHS 105.3 million to GHS 174.2 million, representing an increase of 64.5%. This translated into an increase in agriculture’s share of the total credit portfolio from 24.1% in 2009 to 28.9% in 2010, showing a purposeful channelling of credit to the bank’s agricultural portfolio.

Such growth reinforces the ADB’s position as the country’s number one financier, holding over a third of total agriculture sector credits. The bank’s success was recognised in 2010 with its nomination as Bank of the Year in Africa at the Africa Investor Agribusiness Awards in South Africa. The ADB was recognised for its strides in financial intermediation tailored to the agricultural sector, and its experience accumulated in this area. To further consolidate its position as the premier financial institution in agricultural lending, the ADB’s total loan approvals for agricultural purposes made in the first half of 2011 increased by nearly 70% (financing of the cocoa campaign exclusive), compared with those made in the same period last year. This significant increase in approvals in agriculture-related loans is fulfilling one of the core objectives of the bank’s three-year strategic plan – to increase the share of agriculture in its credit portfolio to 40% by the end of 2012. 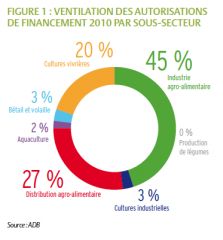 Within the agricultural sector, the subsector that receives the greatest attention is the agro-processing subsector, which accounts for about 45% of sector approvals. This is followed by the agro-marketing subsector (Figure 1).

In partnership with the Ministry of Food and Agriculture (MOFA) and Development Partners such as IFAD and Agence française de développement (AFD), the bank has provided support for farmers under various schemes, such as the Inland Valley Rice Development Project1, the Rubber Out-grower Programme (Box), etc. It has also provided substantial support for several government initiatives, such as the Youth in Agriculture Programme2, among others.

The most significant and critical challenge the ADB faces in its quest to finance and support agricultural investors at all scales is the lack of medium- to long-term financing. This has made it very difficult for the ADB to provide the necessary finance to purchase machinery and plants for agro-processing and to provide working capital for ventures with long gestation periods.
The lack of term financing has also made it difficult to consistently develop agricultural and agro-processing industries, thus affecting the sustainable growth of the economy of the country.

To support its agricultural sector strategy, the ADB has developed a sharpened focus on agriculture, by making available asset financing facilities to assist in developing each segment of the value chain. Products and lending facilities have been designed and adapted to provide credit to each sector and type of client. These are tailored to clients’ needs, using the bank’s understanding of the drivers and structures of the underlying businesses, and the business processes involved. Consequently, its product range is large and flexible: facilities can take the form of short-, medium- or long-term loans; overdrafts; and leasing, depending on the nature/type of financing required. Key sub-sectors where the ADB has a presence include industrial crops (raw materials for industry), food crops, export crops, agro-processing, agro-marketing, agribusiness products, agro inputs, and agro services.
Financing of certain farming operations could take the form of a five-year loan, at a special interest rate of 15% (while base rate was 16.75%), using a variety of potential securities, such as cash collateral, life policies, landed properties, plant and equipment, and personal guarantors, among others), which could be granted to individuals, farmer-based organisations, groups, and companies.
There are other specialised financial products, like institutionalised personal loans for some farmers, like rubber farmers (Box).

The ADB’s vision for the agricultural sector is to help it and its value-chain grow by providing medium- and long-term financing on a strategic and sustained basis. This is premised on the agriculture sector’s huge potential, given global market prices for most agricultural products. However, executing this vision and pursuing the available opportunities require the availability of term financing from various sources, which should be accessible to the ADB. Furthermore, with the establishment of micro-finance institutions and the growth of Rural Banks  in recent times, the monopoly that the bank used to enjoy in financing small-scale agriculture is gradually being eroded.
In spite of significant challenges, the ADB has made giant strides in the past two years. To consolidate these, the bank’s strategy for 2011 involves.
Though supporting out-growers is in its early stages, the ADB is hopeful because of the partnership it has developed with international development agencies such as AFD.

With the common goal of supporting the development of the agricultural sector in contributing to poverty alleviation and economic growth, the ADB and AFD have since 1992 entered into a longterm partnership to finance small-scale farmers in spite of the challenges involved. This culminated in AFD providing a non-sovereign loan of EUR 14 million for phase IV of the Rubber Out-grower Plantation Programme in 2010 (since 1995: 5,450 rubber outgrowers have been assisted to plant 18,952 ha, 868 outgrower farms involving 3516 ha are under tapping and get a monthly income of EUR 1071.6 out out of a 4 hectares farm). The ADB and AFD have promoted a contractual agricultural scheme that has so far demonstrated its efficiency based on a tripartite agreement. The scheme brings the ADB, as the financial operator, together with a technical operator and farmers. The role of the technical operator is crucial as it guarantees, first, the technical quality of the investment (crops); second, maintenance of the investment, by providing inputs and technical assistance; third, a market; and fourth, repayment of the loans (paying farmers for the product after deduction of each instalment). The long-term vision of AFD is impressive. Having supported the programme for about fifteen years through the government, when it withdrew from this role, AFD elected to continue providing financing to the ADB at its own risk, without any state guarantee. The next step in the ADB-AFD partnership entailed a shift from a project to a sector approach. Having satisfied the banking sector with financing small-scale farmers on a longterm basis, AFD is now prepared to grant dedicated long-term facilities to the ADB. The innovation brought to the scheme over the years has to be highlighted, particularly regarding the modalities of the loan repayments. Monthly instalments have now shifted to repayments indexed to the farmer’s turnover, allowing the fast repayment of loans when international prices are good, while not putting farmers in a difficult financial situation when international prices drop. This has led to about a 100% repayment rate from project beneficiaries.

Using the Theory of Change to optimize the investment impact

Access to quality seeds: the example of local seed ventures in Malawi