While all countries face health challenges, the situation is most acute in the countries that are home to the “bottom billion”. While still fighting against the major communicable diseases and maternal and child conditions, they also face the increasing burden of non-communicable diseases and injuries, with health systems that are often underfunded. Within this context, the notion of universal health coverage (UHC) has become the guiding vision for strengthening health systems.

Today the world is less than thousand days from the 2015 deadline of the Millennium Development Goals (MDGs), which were established to guide global efforts at development, especially in the most vulnerable countries, using quantifiable targets against to which measure progress (United Nations, 2000). Health is one of the key focus areas of the MDG framework (Table 1). 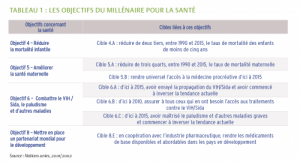 But health is also indirectly linked to the other goals such as the eradication of poverty and hunger (Goal # 1), since health interventions are increasingly seen as priority actions for equitable socio-economic development and for breaking the illness-poverty cycles both at an individual and at a country level (World Bank, 1993; WHO, 2001; Bloom et al., 2011).

Many of the most vulnerable countries have recently been moving towards better health outcomes. Between 1990 and 2011, the global under-five mortality rates had come down by 41%, and between 1990 and 2010 maternal mortality ratio had dropped by 47%, with the most striking achievements coming from the WHO Western Pacific region (Figure 1).

Many countries have also been making demonstrable progress in controlling and treating some of the major diseases, such as HIV/AIDS, tuberculosis and malaria; for example, the number of people living with HIV and accessing antiretroviral treatment (ART) increased by 63% from 2009 to 2011 (UNAIDS, 2012). Globally, mortality rates for tuberculosis have fallen by 41% since 1990 (WHO, 2012).

Despite the recent impressive progress in health outcomes, the progress has been uneven between countries and within countries, and consequently, many of the most vulnerable countries will most probably not meet their targets for the health MDGs (United Nations, 2012A). Furthermore, these countries face health challenges not directly captured by the MDG framework, notably an increase in the burden of non-communicable diseases (NCDs) brought about by ongoing epidemiological and demographic transitions. It has been estimated that 80% of NCD-related deaths happen in low- and middle-income countries and that NCDs also kill at a younger age in these countries, where 29% of NCD deaths occur among people under the age of 60, compared with 13% in high-income countries (WHO, 2011).

Several gaps exist in the health systems in vulnerable countries. In the area of health service delivery, many countries face important geographical limitations in making services available. This could be related to investment priorities (skewed resource allocation to specialised care instead of primary care) but also to the overall shortage of health workers and the failure to motivate them and/or retain them in remote areas. In 2006 it was estimated that there is a worldwide shortage of nearly 4.3 million health workers1 (WHO, 2006). The quality of the health service provided is also one of the major health system challenges, especially in resource-constrained settings where there are structural quality constraints, such as poor infrastructure. Health information systems are often unable to provide data that would enable adjustment and reform in health policies. Affordability and availability of medicines, and their quality, are other challenges2.

Besides these health system gaps, there are several problems that cut across the whole health system, notably inequity and inefficiency. Inequities can be found in the financing mechanisms: countries relying on out-of-pocket payments (OOP) impose an inequitable financial burden on households. Inequities in access to services (for financial or non-financial reasons) are also widely reported from many countries. Finally, there are numerous sources of inefficiencies3, relating to low technical efficiency (for example the ratio of inputs/outputs at the hospital level) or low allocative efficiency, which is interpreted in terms of the mix of health interventions produced at the right time in the right place that would maximize population health for the available resources.

The resource and health financing gaps

The resource and health financing gaps are one of the most crucial health system challenges.  The continuous heavy burden of disease in the most vulnerable countries is further accentuated by the low levels of national income, the informal nature of the economies and a restricted domestic resource base that limits the possibility of countries’ acting on the major health conditions and their risk factors. In 2009, the High Level Task Force for Innovative International Financing for Health Systems (HLTF) estimated that by 2015 the low-income countries would need to spend an annual average of USD 60 per capita on health in order to ensure coverage with a relatively limited set of key health services, while presently the average low-income country spends only USD 32 per capita on health4 in 2010 (Figure 2).

The level of total health expenditure can be broken down into three major components: (i) out-of-pocket expenditure for accessing health services, (ii) pooled funds that rely on prepaid contributions (tax, general government revenue or insurance contributions), and (iii) external funds – in those countries where international support for health is channelled. When systems for prepayment and pooling are weak, people wishing to access health services are forced to pay for them out of their own pockets. This out-of-pocket spending on health leads to financial catastrophe and impoverishment for some people and deters others from seeking or continuing treatment. Due to the low level of government spending on health, the poorer countries rely the most on out-of-pocket payments, which represent almost 50% of total health expenditure in low-income countries, compared with 30-35% in middle-income countries and 20% in high-income countries.

In low-income countries5, government spending on health, in absolute terms as well as in relation to GDP, varies among countries and is generally very low – on average, general government health expenditure (GGHE) is at 2.4% of GDP and USD 12 per capita in low-income countries, compared with 6.8% of GDP and USD 2,400 per capita in OECD countries. Very few African Union countries have reached 15% of GGHE over general government expenditure, as was pledged in the 2001 Abuja declaration (Organisation of African Unity, 2001).

External funding from development partners has been and still is a crucial aspect of reducing the health funding gap. The level of external financing for health almost tripled between 2000 and 2011, from USD 11 billion to USD 28 billion. There is an urgent need to keep focusing on international efforts in supporting the most resource-constrained countries. However, looking at the long-term objectives, it is domestic health funding and domestic efforts to strengthen health systems that will determine the success or failure of reaching UHC and better health outcomes.

Developing health systems towards UHC – what role for the private sector

UHC is a goal that conceptualises the main objectives and values of health system strengthening. It is based on two overarching and interlinked objectives: that everyone has access to good quality  health services they need – including treatment, prevention, promotion and rehabilitation; and that no one suffers financial hardship for paying for those health services. The role of mandatory funding mechanisms, based on the taxation power of governments is crucial for moving towards the UHC objective. It aims at distributing the financial burden equitably among the population and ensuring access to and the affordability of health care for all, and clearly remains a public sector function. In practice this means that public funding is the key to moving towards UHC. Voluntary funding mechanisms in the form of private health insurances (community-based health insurance, commercial health insurance, etc.) could be a supplementary strategy in some contexts for reducing out-of-pocket expenditure, but their impacts on the overall equity of the financing system could be negative if they hamper cross subsidies among different population groups. When it comes to service provision, the answers become much less obvious. The role of the state as a regulator of health service provision is one of the cornerstones of a well-functioning health system, but as basically all countries rely on a pluralistic health service provision model and as the current evidence shows that neither sector is intrinsically superior to the other, the main question is not whether to univocally favour one over the other, but rather to find the best mix of these two sectors in order to ensure the availability, accessibility, efficiency, equity and quality of services. How and whether private sector health service provision supports the objectives of health system strengthening towards UHC depends on the way it affects overall system performance components, such as equity, efficiency and quality. Private sector service provision has been sometimes seen as more efficient and of better quality than that of the public sector. It seems though that the evidence on this is rather inconclusive and varies highly according to the context (Basu et al., 2012; Montagu et al., 2011). From an allocative efficiency point of view, the interface between health financing and service provision is of crucial policy importance. Using public funding to contract service provision or intermediary services to the private sector is a strategy that has been used by many countries (Liu et al., 2007). This type of arrangement has been used, for example, in many sub-Saharan African countries (Benin, Ghana and Zambia, for example) for contracting service provision to private not-for profit providers that operate with subsidies from the government (for salaries, medicines and supplies) and assure health services in areas where publicly provided services are either unavailable or irregular. One of the arguments for resorting to this strategy is that it allows governments to allocate resources more flexibly and to circumvent some of the rigidities in the public system, and at the same time, it allows them to focus on their core functions of governance and regulation.

Moving towards UHC is a process that needs progress on several fronts. Ultimately what matters is how the different health system components align themselves with the overall objective of UHC in ensuring and promoting the utilisation of services, financial risk protection, the quality of services, equity, and efficiency.

¹ The same report identified 57 “crisis” countries (39 of which are in Africa) which have fewer than 23 health workers for every 10 000 people (WHO, 2006).
² In low-and middle-income countries over the period 2007-2011, despite the international initiatives that rely on public and private funding, such as the Global Fund to Fight AIDS, Tuberculosis and Malaria, and UNITAID, the available data shows that, on average, the availability of selected essential medicines was 51.8% in public sector health facilities and 68.5% in the private sector (United Nations, 2012B).
³ The 2010 World Health Report enumerated the ten most common areas of inefficiencies and emphasised which each country would need to tailor their actions toward, depending on the context and available tools, and strategies for increasing efficiency of the health system (WHO, 2010).
4 This included all domestic funding sources and financing provided by external donors, which averaged 28% of total health expenditure for these countries.

Financial sector in Africa: training the next generation of managers