Electricity is expensive and difficult to access in Sub-Saharan Africa. Improving infrastructures would accelerate the electrification of rural areas but requires a high level of funding. Decentralised power generation projects – based on renewable energies – could be the key to unlocking this high-potential market. As yet, however, these projects have not developed business models that are genuinely sustainable over the long term. 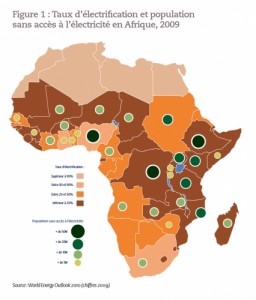 Electricity also remains a costly resource for African consumers. The average tariff for individual customers is 13 US$ cents per kilowatt hour (13c$/KWh), i.e. close to that of OECD countries (14 c€/kWh in France) for a standard of living that is fifteen times lower. It is also substantially higher than the cost observed in other developing regions. Electricity supply solutions for the huge rural areas not served by the power grid are more expensive still, reaching as much as 30 to 50c$/KWh for a generator, or even 70c$/KWh for the use of a photovoltaic kit. Finally, even within electrified zones the supply is not reliable: failures and blackouts occur on nearly ten days per month, involving outages lasting an average of six hours per day. The poor quality of the electricity supply entails a significant loss of earnings for the countries of sub-Saharan Africa, assessed by the World Bank at more than two GDP percentage points (Eberhard et al., 2011).

The electricity operators of sub-Saharan Africa face a seemingly intractable economic equation. With 70% of the population living on less than two dollars per day, the market potential is limited. Electricity suppliers also face the challenge of recovering payments due to them: some 40% of end customers do not pay their bills (the non-payment rate in France, for purposes of comparison, is below 1%).

In addition, these companies have to operate electricity infrastructures that are cumbersome, centralised, and covering vast territories. Operating costs are high, averaging 14c$/KWh, and are rarely covered by end-user tariffs. As a result only seven countries in sub-Saharan Africa cover their historic production costs, the level of coverage rising no higher than 61% on average for the other countries. Ineffective debt recovery, combined with a limited market, drains African operators’ ability to sustain their operations and maintain their power systems – further impairing their performance level. Network losses and fraud account for nearly 25% of the electricity produced. In this context, operators have limited resources, reducing their ability to invest in developing the power system.

The combined production capacity of all the countries of sub-Saharan Africa (excluding South Africa was just 34 gigawatts (GW) in 2010 – around the same level as Poland; France, by comparison, has a production capacity in excess of 120 GW. This capacity has doubled since 1980 – but the population of these countries has doubled, too, over the same period. Relative to population, the available electricity capacity has therefore been stagnating for more than 30 years. To match demographic growth and to meet the growing demand arising from ongoing economic development, the UN estimates that 7 GW of additional electrical capacity would need to be installed each year. This would represent an annual investment of US$ 41 billion. The traditional development model for power systems based on centralised production and network extensions would therefore require substantial funding – funding the African operators would find it difficult to sustain. There is no doubt that a more appropriate route for sub-Saharan Africa is to look to develop decentralised generation methods, not connected to the main electrical network (off-grid) or organised around a local mini-grid.

Decentralised power generation – the best solution for this market

Given Africa’s high levels of solar irradiation, solar energy could offer a promising solution. A study undertaken by the European Commission (Monforti et al., 2011), for example, showed that over a large portion of Africa’s rural areas, electricity generation via photovoltaic panels is more competitive than using a generator (map 2, areas coloured yellow to red). 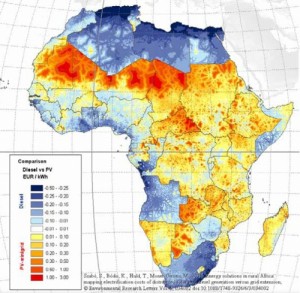 The high power density of the solar radiation, reaching 2,000 to 2,500 kWh per square metre per year (compared with an average of 1,300 kWh in France), explains this higher level of profitability; generator-based supply, by contrast, remains dependent on road infrastructures for diesel deliveries. Moreover, the steep decline in the cost of photovoltaic panels is heightening this comparative advantage – at a time when fossil fuel prices are steadily rising and the state subsidies that keep them at an artificially low level in many African countries are being phased out, a process driven by IMF-led reforms.

The relative simplicity of solar solutions is another advantage. Yet solar and diesel are not necessarily competitors: at local level, a hybrid system supplying a mini-grid offers an attractive solution for rural electrification (Léna, 2013). Despite the downward trend in photovoltaic costs, solar-based electricity generation solutions remain expensive for local populations. Individual solar kits represent an investment of between €700 and €1,000 for a family, while solar-diesel hybrid systems supplying a village with electricity can cost several hundred thousand euros.

While microfinance can support the wider uptake of individual solar kits, solar solutions on a larger scale are held back by the high up-front cost of the initial installation – even though subsequent operating costs are lower. These challenges are the inverse of those relating to diesel generators and this in itself suggests the need for strategic adjustments. In order to support solar power and widen access to energy in rural zones, African governments need to opt for subsidising investments rather than operating costs, while investors need to be willing to depreciate capital expenditure over a longer period. Most African states have adapted their regulatory framework and set up dedicated organisations – rural electrification funds or agencies, for example (see box) – in order to develop power installations in their rural zones, often with the support of Western banks and development agencies. Given that 60% of the sub-Saharan population lives in rural areas, rolling out competitive off-grid power supply solutions represents both a key development vehicle and a significant market opportunity.

These concessions were awarded to private operators for a period of 25 years in the framework of public-private partnerships with financial support from the World Bank, the African Development Bank, development agencies from Germany (KfW) and France (AFD) and the Islamic Development Bank. The process of setting up this institutional framework was laborious – but the radical overhaul ultimately bore fruit by attracting investors to the sector. From 2008 onwards, six concessions were granted to private groups involving international players and local businesses. The country’s rural electrification rate progressed from 8% in 2000 to 23% in 2010. With nearly half of the overall investment provided by the private sector (Mawhood and Gross, 2014), Senegal successfully overcame the primary challenge facing all rural electrification projects: accessing finance.

Nonetheless this commercial potential still needs to be unlocked, most notably by finding profitable business models appropriate for people in poverty. Since the early 2000s, Total and EDF have implemented a business model specifically tailored to rural electrification. Decentralised Service Companies (DSCs) are commercial companies governed by local law, financed by private investors and development agencies; they are awarded concessions lasting from ten to twenty years for electrifying remote geographic regions. They offer users a range of services according to the number of light bulbs and power sockets to be supplied and are paid via an initial connection tariff and a fixed monthly subscription. Although these DSCs have helped to significantly improve living standards for the populations they serve, they have had a limited impact on the local economic fabric and have failed to achieve their target performance levels. Clearly their business model requires further adjustment.

Looking beyond the concession model,¹ some business models are more oriented towards small-scale markets and the least advantaged populations. In 2009, for example, Schneider Electric launched a programme called “BipBop” for developing technologies suited to rural electrification, investing in local businesses (such as One Degree in Kenya with its Brightbox solar kit, or Fenix in Uganda with its ReadySet kit), and training up local energy professionals. Yet energy operators are not alone in taking an interest in rural electrification.

Telecoms operators, with a strong presence in Africa where the mobile telephony market has seen dynamic growth (+20% annually), are proving very active in this sector. These players – less trammelled by the regulatory framework – can make their investments pay via their telephony offering, enabling them to offer an electricity supply service at marginal cost. The Green Power for Mobile programme, for example, launched by the GSM Association in 2008 and active in more than 20 African countries, aims to develop mobile networks in rural areas by rolling out local mini-grids fully or partially supplied by renewable energies (mainly solar). Orange, present in 16 African countries, has installed 1,300 solar base stations in rural areas – enabling users to charge their phones but also to generate electricity for basic services. This offer is not as yet part of an integrated strategy and is not as yet competing with the activities of the energy operators.² All of these “grassroots” strategies implement pragmatic supplementary power supply solutions in areas beyond the standard power grid. They may well spread steadily across the whole continent.

Electricity demand in sub-Saharan Africa is steadily growing. The future of rural electrification is clearly less likely to be found in centralised production than in more local, flexible and innovative solutions. Financing these solutions often remains challenging, yet many projects based on a “grassroots” approach are emerging – raising hopes that that the electrification process could gather pace in the future. It is notable that companies from other economic sectors – telephony operators, for example – are on the way to becoming key players in this sector. All the players involved, whether traditional energy operators or telecoms specialists, are looking to develop a business model answering the needs of a vast potential market: 585 million consumers.

¹  DSCs are of course not the only business model based on awarding concessions. Independent power generation unit projects, for example, are backed by private operators via power generation licenses.
²  It does compete with power generators and photovoltaic kits at local level, however.

The Interest of Multiplayer Dialogue for Public Service Operators