Democratising access to higher education: a story from Brazil

Anhanguera is part of a new generation of private companies that have flourished during the last decade in Brazil catering to the demand from a growing middle class for higher education. Thanks to considerable economies of scale and its standardised model, Anhanguera has put in place an attractive, high-quality offer that meets the needs of low-income young workers. Developing a skilled workforce will be a key lever for Brazil’s productivity and growth.

Two in three Brazilian employers say they have trouble recruiting skilled work­ers. All sectors are affected, from civil engineering to new technologies, including marketing, research and development and ad­ministration. The shortage of skilled workers is hampering productivity and weakening the Brazilian economy. The higher education sys­tem is in fact failing to produce graduates with the qualifications and profiles that employers are looking for, at a time when the country’s strong economic growth is generating an unprec­edented demand.

Although higher edu­cation has tradition­ally been the preserve of Brazil’s socio-economic elite, the government made a concerted effort in the 1990s to broaden access to tertiary edu­cation, setting up new state universities and introducing a scholar­ship programme. In 1997, a fundamental amendment to the legislative framework moved Brazil towards allowing for-profit high­er education institu­tions in a market that had previously been ex­clusively not-for-profit. This change triggered a mass influx of private providers to the higher education market, with numbers increas­ing five-fold in just 10 years – by 2011 there were 2,365 private establishments compared with 284 that were state-owned. 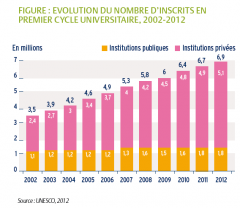 These private establishments have played an important role in the democratisation of higher education (Figure). The number of students has increased dramatically (+91%) in the last decade, as has distance learning (+12% between 2011 and 2012). Today, 73% of students in higher education study in private institutions. Since access to state uni­versities is restricted by extremely selective en­trance tests, these new establishments cater to the aspirations of a flourishing middle class that is conscious of the value of a university de­gree. A young graduate in Bra­zil is likely to earn 3 times more on average than someone with only secondary-school qualifications, com­pared to 1.7 times more in the United States and 1.5 times more in France.

Despite this progress, the enrolment rate for higher education in Brazil is only 7% on average (5% in the lower-income brack­ets). More than a million young people who have completed secondary school simply can­not afford to study at one of the conventional private institutions.

Anhanguera is part of a new generation of private companies set up with the aim of democratising university access. The group, established in 2003, has developed a pri­vate higher education offer tailored to socio-economic classes C and D¹ – 60% of its students live on a monthly income of less than BRL 1250 (around USD 525). Not only are its affordable tuition fees lower than those charged by the competition, but the teaching format has also been adapted to the daily lives of students from the middle and lower socio-economic classes, who usually work during the day and study at night. In addition, to foster access to private higher education for the poorest, the group reserves 10% of its places for scholarship students from the government’s ProUni programme² – a scheme that, in return, allows the company to benefit from tax relief.

These attractive rates are made possible because Anhanguera standardises the edu­cation environment – the buildings and ma­terials, and course content. The size of the Anhanguera network and its centralised man­agement system enable it to achieve significant economies of scale. The purchasing, adminis­trative and financial management functions for all Anhanguera centres are centralised at head office, along with course content devel­opment. A team of engineers supervises the construction and renovation of buildings for the entire group, enabling it to take advantage of bulk savings when purchasing materials. Part-time employment contracts for teach­ing staff – whose salaries account for 70% of Anhanguera’s expenditure – also allow the group to reduce operating costs.

Anhanguera’s development is symptomatic of the rapid growth of a market – the mar­ket for higher education – and of a context – the unprecedented growth of the mid­dle class. Anhanguera started out as a small non-profit institution based in Leme, in the state of São Paulo, with four teaching centres and 9,000 students. In 2003, Anhanguera became a public limited company. Two years later, the Fundo de Educação para o Brasil (FEBR), a fund set up by Patria Investimentos, became the majority shareholder. In addition to providing investment, the involvement of FEBR prompted the company to implement a long-term strategy planning Anhanguera’s growth and expansion process. At the same time, its operating and management proce­dures were professionalised and standardised.

From around 2005 onwards, increasing num­bers of young Brazilians had the means to invest in a degree course, but were unable to find an affordable course. So there was a high demand and good market potential for Anhanguera. Because the Patria fund was no longer sufficient to sustain the group’s growth, and the cost of borrowing was too high, a stock market flotation appeared to of­fer the best solution for meeting Anhanguera’s financing requirements. In 2007, the group became the first higher education organisa­tion in Latin America to go public.

Having raised – between debt and equity – the equivalent of USD 1,130 million, the group was able to grow rapidly – mainly by taking over existing universities. This growth-by-acquisition model offers a number of advan­tages over building new universities. The establishments have the necessary adminis­trative licences,³ the students have been found and the organisation is already generating a certain level of profit. The challenge then is to change the cost model, and improve efficiency and the quality of the educational offering.

Today, Anhanguera has 70 centres in 9 states and a total of 441,000 students. The group’s financial performance has been recognised by the markets, a result of the group’s success­ful development and a sign that investment in education is becoming attractive to private investors. With 26 million 18–24 year-olds in Brazil, the higher education market could be worth BRL 17.6 billion (around USD 9.7 billion) per year. Anhanguera has succeeded in exploiting this favourable con­text, but has also managed to define, organ­ise and successfully accomplish its growth – by combining specialist expertise, sup­plied by its teaching staff, with financial and organisational expertise, supplied by an investment fund.

Anhanguera has invested heavily in the quality of its teaching. The course content is developed by a team of professionals at head office and replicated in all the network’s centres. The pro­grammes, teaching materials and procedures are the same everywhere for both attendance and distance learning courses. As well as of­fering benefits to students, who can trans­fer from one centre to another, this strategy makes it possible to introduce identical quality standards throughout the group. It is also the key to the group’s rapid development over the past few years.

In order to maintain this quality standard and develop its teaching formats further, Anhanguera has set up a com­plete evaluation system. In­ternal audits – of the course content, infrastructure and teaching staff – are carried out to identify gaps in the curricu­lum and deficiencies in the way the centres are run. The students are also assessed at regu­lar intervals. A technological platform ena­bles the centres to identify students who are struggling with their studies, who can then be offered personalised support to prepare for their qualifications.

The quality of the teaching at Anhanguera centres is also linked to the Anhanguera peda­gogical model with its practical focus, and its close ties to the workplace. Courses are devel­oped in line with the needs identified in the job market, and more than 75% of the teach­ing staff are external lecturers drawn from the world of work. This corresponds with the group’s desire to provide teaching that is practical rather than theoretical. In ten years’ time, a university degree will no longer guar­antee someone a skilled job. Competition on the Brazilian job market will be between graduates with comparable qualifications, so it will be the quality of the teaching, the brand image of the establishment and its ability to respond to the needs of businesses that will make the difference.

A powerful and open university system is essential if Brazil is to establish itself as a global player. By giving thousands of young people access to higher education, private groups such as Anhanguera are helping to democratise education, playing a vital role in increasing enrolment rates in higher educa­tion. However, if they are to exploit this mar­ket potential to the full, the government will need to pursue its efforts to improve primary and secondary education so that sufficient numbers of students have the necessary qualifications to go on to higher education.

The challenge facing the country in the fu­ture will be not only to increase the number of students, but also to produce skilled work­ers who meet the requirements of the job market. To cope with these challenges, edu­cational establishments will need an expe­rienced management team, a reliable teach­ing staff, a curriculum that is continuously improving, high-quality teaching and confi­dent investors. In an environment that will soon become more competitive, players who do not manage to make this quality leap are doomed to fail.

¹ Class C is the middle class; it represented 55% of Brazil’s population in 2011 and corresponds to an average monthly income of USD 940 – 4,000, Class D is the lower class, 20% of the population, with an average monthly income of less than USD 940.
² Created by the federal government in 2004, the University for All programme (ProUni) is a national scholarship program aimed at expanding the number of higher education openings for students from less wealthy families in Brazil. It grants full and partial scholarships to study in private institutions of higher education offering undergraduate and sequential training.
³ To open a new university, organisations have to obtain a licence from the ministry of Education, which is issued two years after the request is submitted. No students are allowed to enrol during this period.

From Warehouse to Patient: mPharma’s Approach to increasing the Accessibility of Medicines in Africa 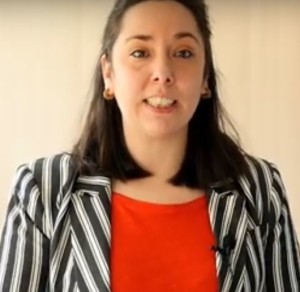