Sub-Saharan Africa possesses considerable solar and wind energy resources and demand for electricity is growing steadily. Despite this favourable scenario however the realisation of projects based on these energy sources is proving difficult. The explanation lies in a number of hindering factors, some of which are specific to the electricity sector such as the predominance of an offer-oriented system, the capacity and stability of electricity grids, the structure of the sector, etc.

Sub-Saharan Africa possesses good solar and wind power resources across exceptionally wide areas, making electricity generation from intermittent renewable energy sources feasible across much of the continent. It also benefits from very strong growth in energy demand, forecast to be around 80% by 2040 (International Energy Agency ). As a result of poor maintenance of the power grids, and the resulting transmission losses, electricity generation costs in sub-Saharan Africa are generally high, which should make renewable energy all the more competitive – although the degree of competitiveness does vary from country to country (Figure). 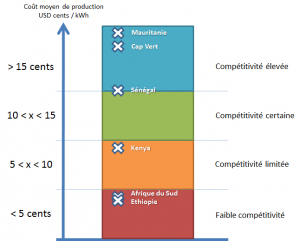 However, despite undeniable potential and what at first sight appears to be an extremely favourable context, the great majority of renewable energy-based projects never leave the drawing board. Whereas the development of a project in Europe takes two to three years, in sub-Saharan Africa the average lead time is five to ten years. This paradoxical situation arises for the most part from a series of bottlenecks that slow or prevent the development or implementation of projects. While country risk, deemed high in this part of the world, is often cited as a major obstacle to the development of renewable energy projects, it is far from being the only one; other factors include those more specific to the electricity sector, some relating to actual infrastructure and others being associated with the sector’s intrinsic organisation.

The precarious balance of electricity systems

In addition to issues related to power grids and their development, some obstacles to the development of solar and wind power relate to the structure of the sector and the nature of its principal stakeholders. In sub-Saharan Africa private generation remains marginal and governments intervene in setting electricity prices. Public electricity companies are major industry players because they are very often in a position to support (or not) the development of solar and wind generation. For the most part however the financial situation of these companies is critical because, in order to commit to buying energy, they first need a healthier balance sheet. One solution would be to feed changes in the oil price through to their tariffs; should a decision be taken to freeze prices, then in principle the government would have to backfill the operators’ lost earnings by paying them an “operating grant”. However, in the current context of high price variability in primary energy from fossil fuels this compensatory mechanism becomes very costly – itself constituting a further argument in favour of electricity generation from renewable sources.

However, driven by the social acceptability of energy prices governments will often impose a means of setting retail prices which generally fails to take into account the pricing provisions contained in electricity purchase contracts. While not the sole reason for the vulnerability of public electricity companies, government setting of prices below their real levels will often result in a vicious cycle of under-investment and lower performance which will further detract from the company’s financial situation. This is the reason why so many of these public companies underperform in terms of production (high specific consumption, etc.) as well as in terms of distribution and marketing (high transmission losses, poor billing and collection rates, etc.) In order to improve this performance governments are increasingly – and of their own volition – resorting to service or management contracts with a private partner.

While private sector involvement in the electricity market remains marginal in sub-Saharan Africa it is undoubtedly set to increase, particularly in the form of public-private partnerships. Put another way, if the private sector wishes to become involved in electricity generation – particularly from renewable sources – it should not be content simply to accept the most common arrangements. Conventionally, either the costs of exploration and development are borne by private independent producers financed mainly by private sources, or projects are performed as public projects. In this case, the power plant or wind farm is designed and built by a private consortium (design-and-build contract), with commissioning optionally being followed by a relatively short-duration operation and maintenance contract. Renewable energy generation projects must avoid confining themselves to just these two options. Certain power plants could be designed, built and then operated and maintained by the same private operator, with some or all of the financing coming from the public purse. This approach (which is employed particularly in water treatment and waste disposal) would allow the cost price to be reduced while transferring to the operator the risks associated with the performance of the installation.

Furthermore, the “seizing opportunities” mindset must be replaced by a government-led demand-driven policy. This in particular presupposes that projects be selected as effectively as possible. The selection of independent energy producers can be made through the feed-in tariff where a large number of small-scale projects is expected. This selection approach does however present risks, as setting the tariff at the “right level” is difficult: too high a tariff will generate a flood of projects that are disadvantageous to the buyer, while one that is too low (most often the case in sub-Saharan Africa) will be unattractive and fail to result in any credible project. For medium to large-scale projects, whose commissioning will result in near saturation of the electricity system’s absorption capacity, selection through a call for tenders – or even a call for projects – is recommended.

Lastly, most countries in sub-Saharan Africa have established regulatory authorities for the electricity market. Contrary to some preconceived ideas, regulation is in the interest of everybody, including private partners. “Good” regulation is effectively synonymous with transparency in the process of operator selection, in setting tariffs consistent with the economic realities of production costs and social acceptability, and in establishing an appropriate legal framework that guarantees legal certainty for the various stakeholders.
The emergence of solar and wind power has highlighted the exceptional resources existing in sub-Saharan Africa and has spawned numerous private electricity generation projects. The majority of these however struggle to become reality. The fact is that these projects are offer-oriented – or even represent “commercial opportunism”—rather than a response to needs that are clearly specified by the government through a planned approach. However the situation is rapidly changing. Public authorities and national electricity companies are gradually evolving from watchful, cautious observers into demanding specifiers. The existing obstacles should logically therefore be easier to identify and overcome, enabling the emergence of robust and sustainable solar and wind projects in sub-Saharan Africa.

Competitiveness of renewable energy sources by average cost of production