Mining as a transformative opportunity for Sub-Saharan Africa

Mining can be a formidable transformative opportunity for Sub-Saharan Africa but measures and regulations are required to strengthen the finances of the local utilities and provide a less uncertain and more secure operating environment. Power–mining integration can create a win-win situation both for the local economies and the private sector. In this paper, the authors show how mining demand can be used to unlock clean energy solutions thanks to concrete measures that policy-makers could apply.

Mining is one of Sub-Saharan Africa’s (SSA) key economic sectors and accounts for over half of total exports in many countries. Projected mining investment for 2013–20 is US$ 75 billion and represents a huge chunk of regional GDP (figure 1). 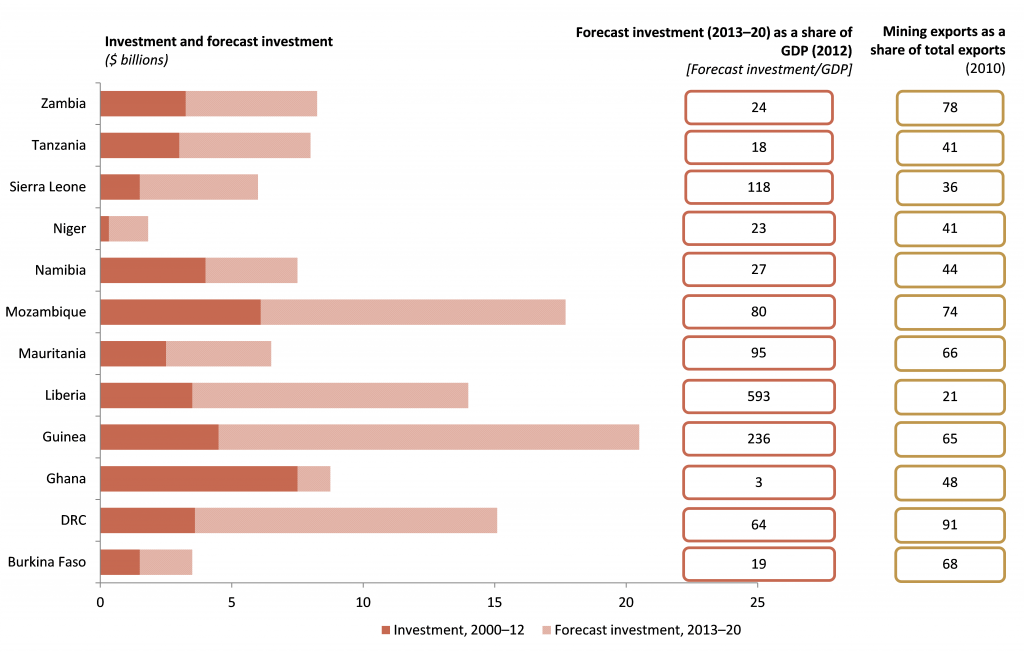 Note: The investment figures are averages across a range. For Mozambique, forecast investment excludes natural gas.

Power generally accounts for between 10% and 25% of a mine’s operating costs, depending on the processes undertaken and whether it uses the national grid or self-supply. Power–mining integration can create a win-win situation: mining companies become reliable, anchor customers 1 for utilities, funding investment that benefits all consumers. Grid supply 2 generally costs mines less than self-supply and allows mines to focus on their core business. Such arrangements boost host-country GDP thanks to greater mineral benefits and more local jobs and they make mines more competitive through lower power costs.

For SSA, economic growth needs to be underpinned by a much larger power sector. Installed generating capacity is only 80 gigawatts (GW) at present. Capacity has only risen 1.7% a year over the past 20 years and the region will account for 70% of the world’s unelectrified population if this trend continues. To keep pace with economic development, installed capacity needs to reach 700 GW by 2040 (Eberhard et al 2011).
Proparco’s November 2013 issue investigated how Independent Power Producers (IPPs)3 can help solve Africa’s power problems and looked at a flagship project in the Democratic Republic of Congo that leverages the energy requirements of the mining sector. A World Bank report was used to show how the mining industry’s potential can be unlocked to boost power availability in Africa’s mineral-rich economies (Banerjee et al 2014).4

While South Africa accounted for 70% of mining power demand in 2000 and 66% in 2012, its share is forecast to fall to 56% by 2020. Demand has been concentrated in a small group of metals – aluminum leads in particular, followed by copper, PGM, chromium, and gold – but there has been little new aluminum activity since 2000. Copper and platinum are expected to drive the largest increase (2,150 MW and 2,010 MW, respectively). Refining processes account for about two-thirds of total power demand.

In certain countries, mining demand for power dwarfs that of other sectors: in 2012 it totaled 24% of domestic demand in SSA and is expected to rise to 30% by 2020; in Guinea, Liberia, and Mozambique, mining is expected to exceed non-mining demand by 2020 (figure 2). If grid capacity remains at 2012 levels and if mining demand could account for 35% of total demand by 2020, mining companies will be forced to generate their own power or come up with innovative alternative solutions. 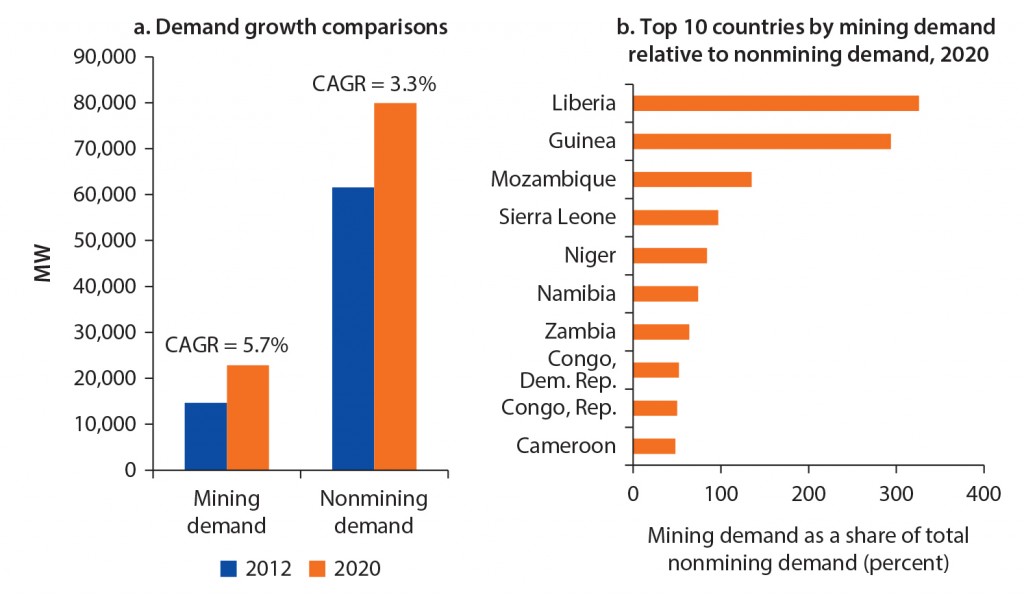 Note: Panel includes 27 countries for which both mining demand and total demand figures are available.

There are at least six intermediate arrangements between self-supply by mines and grid supply (table 1), most notably “self-supply and sell to the grid” and “mines invest in the grid”. 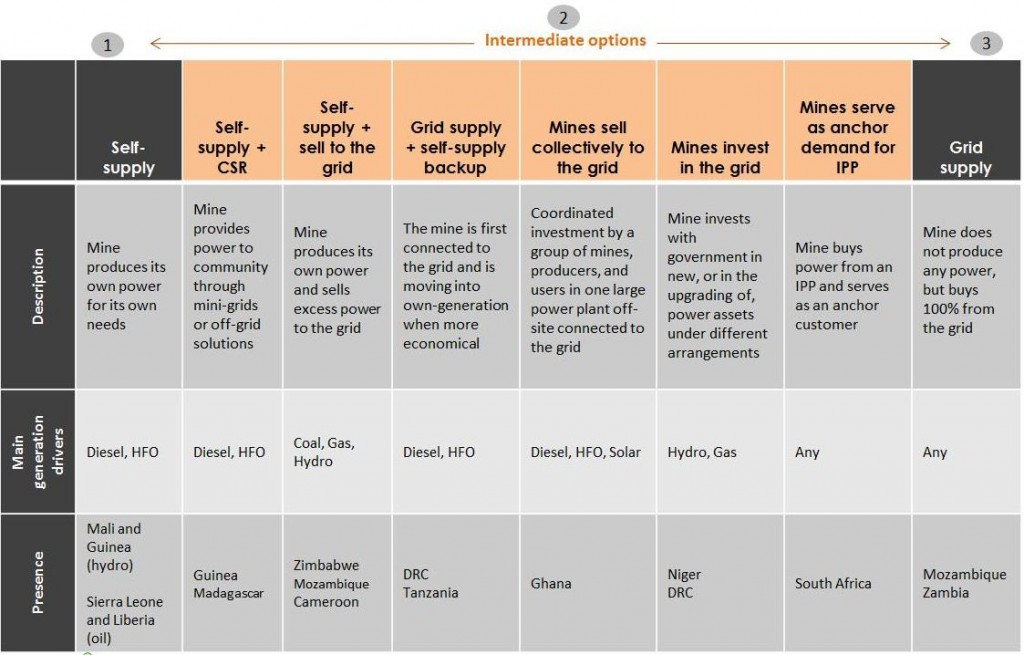 Mining demand can be used to unlock clean energy solutions. Four power-sourcing arrangements involving grid-based partnerships (i.e., mines sell collectively to the grid, invest in the grid, serve as anchor customers for IPPs and grid supply), coal-based generation will account for around 69% of the installed capacity by 2020. Hydropower generation will account for about 27%, with the remaining 4% powered by oil (figure 3.a).

Three main factors determine power-sourcing arrangements. First, a country’s primary energy source. Hydropower-based grids tend to favor integration: mines are either connected to the grid or part of an arrangement with the utilities that is fully or partially financed by the mine. Second, supply–demand power imbalances and resulting power shortages. When reliability is poor, mines have opted out of the grid and moved into self-supply in South Africa and Tanzania. Third, cost differentials between grid tariffs and self-supply. Self-supply is often based on oil-fuel-based grids where tariffs are lower than the grid tariff—but also on hydropower where mines self-supply at a higher cost because of frequent outages. Mines invest with government in existing or new power assets mainly in countries with hydro-based grids or low-cost electricity. Their expectation is to build a stronger grid to deliver stable and cheap electricity in the medium to long run. Mines are at least as concerned about security of supply as they are about cost. They invest in self-supply even when the cost per kilowatt delivered is much higher to ensure control and continuous power availability.

Harnessing economies of scale can produce cost savings for both mines and local populations. In Guinea, Mauritania, and Tanzania for example, mines can potentially be anchor consumers for local electrification schemes. It is still not economically possible to connect mines to the nascent, unreliable grids of Guinea and Mauritania but contiguous mines wishing to self-supply could join together or contract with an IPP to manage a mini-grid operating at high voltage. This could involve hydropower projects in Guinea or CCGT projects in Mauritania (figure 4).

Different integration scenarios were simulated for the three countries. In Guinea and Mauritania the optimal scenario was shared supply and provision to neighbouring communities. The resulting simulations generated $640 million and $990 million in savings for the mines and provided electricity to 5% and 4% of the respective populations. In Tanzania, the poor performance of TANESCO is forcing many mines to self-supply. In the simulations, integrating a 300 MW grid would generate savings of about $3.5 billion for the mines and provide the rapidly growing regions of Mwanza and Shinyanga with reliable power. 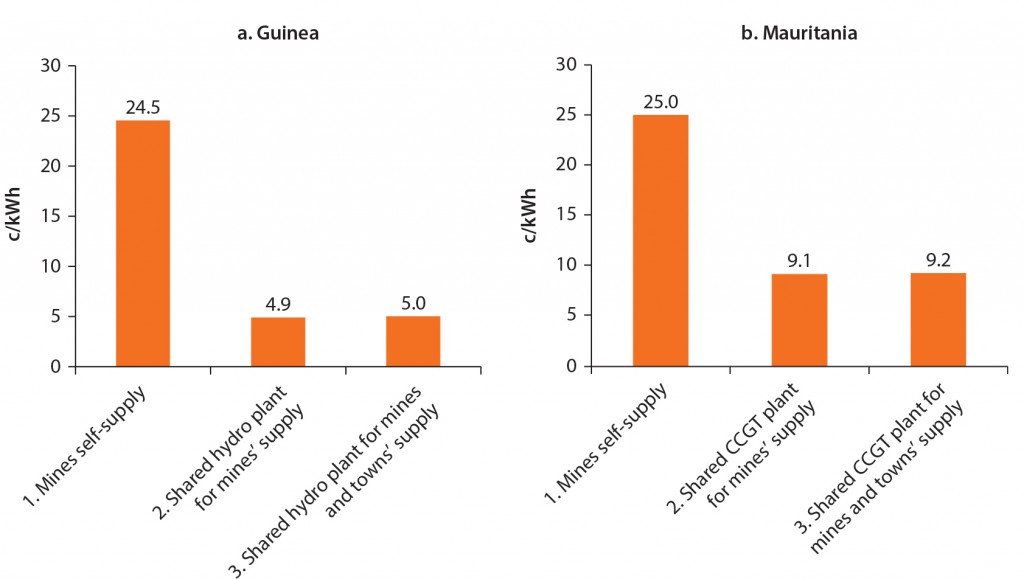 In many mineral-rich countries, electrification rates remain below 20% and – despite its huge potential – there is little evidence of any great benefit to local populations from power-mining integration. Such arrangements are hampered by the complicated nature of the related commercial arrangements and by the risks and hazards of mining and mining investments. But Cameroon could be pointing the way forward. Here, the government has devised a long-term planning framework that commits large power users to developping the full potential of hydropower resources. Private developers must compete for the right to develop hydro sites based on optimal power-sharing arrangements whereby surpluses are sold back to the grid on a cost-recovery basis.

The private sector has a vital role to play in SSA’s power industry. To create a win-win situation that benefits all stakeholders, policymakers need to focus on the following areas:

Mining demand for power in Sub-Saharan Africa is expected to treble to 23,443 MW by 2020 but current total installed generating capacity is a paltry 80 gigawatts and rising by a mere 1.7% a year. As a 2014 World Bank Report has pointed out, mining can be a formidable transformative opportunity for the regional economy but measures and regulations are required to strengthen the finances of the local utilities and provide a less uncertain and more secure operating environment, thus enhancing the attractiveness of the requisite private sector investment.

1 Anchor consumers are high-volume customers that provide a consistent source of revenues.
2 Grid supply is power obtained from the network of transmission lines, substations and transformers, etc.
3 EIA definition: A corporation, person, agency, authority, or other legal entity that owns or operates electricity generation facilities for use primarily by the public that is not an electric utility.
4 The full details of the study, including the data base, simulations and specific country examples can be found in Banerjee et al (2014).
5 World Bank definition: A Power Purchase Agreement (PPA) secures the payment stream for a Build-Own Transfer (BOT) or concession project for an independent power plant (IPP). It is between the purchaser “offtaker” (often a state-owned electricity utility) and a privately owned power producer.

The rise of emerging players in global mining: drivers and future challenges