Experiences in index-based insurance for farmers: lessons learnt from Senegal and Bangladesh

Index insurance is an innovative approach that pays out benefits based on a pre-determined index (e.g. rainfall, seismic activity, livestock mortality rates, etc.) for losses arising from weather and catastrophe events without requiring the services of insurance claims assessors. This article focuses on micro- and meso-level approaches to distributing agricultural index insurance and is based on the Global Index Insurance Facility (GIIF) experiences1.

Farmer cooperatives have thus become the first recourse for insurance claims and they only pay out to farmers who have reimbursed their loans at the end of the season. In 2015, 36% of payouts were retained to cover non-repayment of in-kind credit by insured farmers.3

This example of micro-level distribution demonstrates how index insurance can be incorporated into agricultural lending schemes. By enhancing their creditworthiness through insurance pro-tection, participating farmer cooperatives and farmers hope to be able to borrow more on better terms. Indeed, Senegalese farmer cooperatives indicate that they have more bargaining power in their relationship with financial institutions.

However, while several studies have shown the significant impact of agricultural insurance on farmers’ risk-taking behavior,4 firm evidence of its impact on credit availability is still scarce. An initial analysis of lending activity by Senegalese farmer cooperatives suggests that only a small amount of production credit accessed by small farmers is currently linked to insurance (less than 5% in 2014). Even for large scale, well-established insurance programs in India or Mexico for example, there is no conclusive evidence that insurance has protected agricultural lending (e.g. by reducing non-performing loans in bad years), or been used by financial institutions to expand agricultural lending (through larger volumes of credit, broader segments of borrowers, cheaper rates, longer maturities, etc.). Additional research is definitely required.

Index insurance has considerable potential for boosting the development goals of enhanced access to credit and markets.

PRAN Foods, Bangladesh’s largest agri-processing firm, purchased meso-level index insurance from Green Delta from January to June 2016.5 GIIF partnered Green Delta’s development of this index-based product which insures cassava (the glucose used to manufacture energy drinks against cold spells and excess rain at critical stages of the crop cycle. 60 farmers on 100 acres have been insured for the first-half of 2016.

PRAN purchased this insurance to cover the expected harvest value of the 100 acres selected for the pilot program (i.e., approximately USD130/acre for a total of USD13,000). PRAN is both policy holder and insured party: it paid the premium and will be the sole beneficiary of any payouts. It plans to use these to help cover liquidity needs in the event of insufficient local supply due to a major weather shock. In the event of less severe shocks that do not significantly threaten local supply, PRAN is considering giving payouts to farmers as a ‘bonus’, thus introducing them to the benefits of insurance as a first step in transitioning from meso-level coverage purchased by the company to micro-level coverage. Future micro-level arrangements would have individual farmers as the insured party with the company and farmer potentially sharing the cost of the insurance. PRAN believes that access to micro-level insurance would encourage more farmers to grow this relatively new crop.

Index insurance speeds up claims settlement by dispensing with loss assessments: payouts are determined on an objective basis which eliminates the risk of fraud.

While it remains difficult to draw conclusions about the impact of meso level coverage, the PRAN case study does provide some useful research pointers. First, meso-level coverage may improve access to markets. PRAN is new to contract farming in Bangladesh and its scheme has provided a whole new market for smallholders in the area. The availability of insurance for their supply of raw materials may prove to be a critical factor in establishing a sustainable local source of cassava. Second, PRAN’s idea of transitioning from meso-level to micro-level coverage for individual contract farmers provides an interesting illustration of J. R. Skee’s development stages of index insurance.6 PRAN’s meso-level arrangement is currently aligned with stage one, where products are sold to aggregators to insure against natural disasters. By purchasing this insurance, PRAN limits its liquidity risk in the event that it has to import significant amounts of cassava due to local crop failure. PRAN’s idea to use payouts as “bonuses” would actively facilitate a shift to stage two where the insurance provides a direct benefit to farmers. Third, meso-level insurance for agriculture value chain actors such as PRAN may represent a more attractive business opportunity for insurance companies as agribusinesses have a vested interest in insuring the value of agricultural production and not merely the value of inputs.

Distribution of micro- and meso-level insurance
Micro-level insurance policies are for individual farmers. Most are sold through aggregators such as financial institutions or agricultural cooperatives. The aggregator is usually the policy holder, making administration easier for the insurer, but individual farmers are the insured parties who ultimately pay for and benefit from the coverage. Insurance is sometimes mandatory for farmers working with the aggregator, e.g., those receiving a loan from a microfinance institution (MFI) or inputs on credit from a contract farming scheme.
Meso-level distribution provides insurance to organizations for risk management purposes. The aggregator is policy holder, insured party and direct client of the insurer. Financial institutions can purchase policies to cover default risks arising from major agricultural shocks. Agri-processors can purchase policies to cover the risk of non-recovery of inputs advanced to contract farmers or insufficient supplies of raw materials due to agricultural shocks. Meso-level distribution is a recent development and examples are still quite rare. 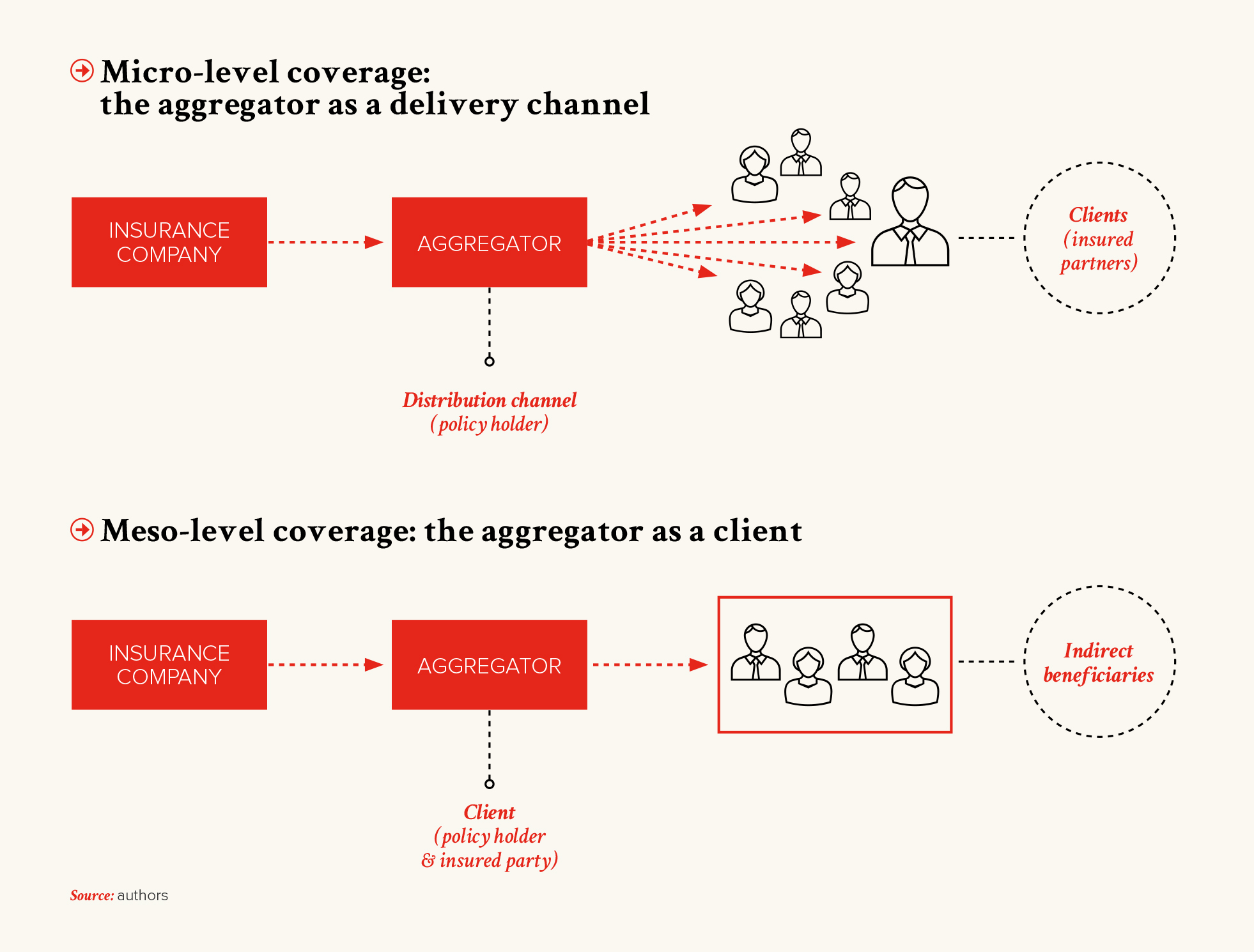 The potential premium volumes represented by the former are far greater than those of the latter.

Although index insurance has considerable potential for boosting the development goals of enhanced access to credit and markets, solid research evidence is still lacking for both microand meso-level distribution arrangements and future research needs to focus on the advantages and disadvantages of both. The relative merits of micro- and meso-level distribution will generally be strongly influenced by the context-specific constraints that the products are intended to tackle.

1 The GIIF is a multi-donor trust fund financed by the ACP Group/EU, the Japanese Ministry of Finance and the Dutch Ministry of Foreign Affairs. It helps develop weather and catastrophe index insurance in developing countries throughout the world. GIIF’s regional partners have insured €138 million of assets for over 1.2 million small farmers and small businesses and provided millions of people with information and access to index insurance.
2 In 2015, almost 9,000 farmers initially enrolled but did not ultimately purchase cover. This figure compares to enrollment of 5,667 in 2014,
2,325 in 2013 and 60 in 2012.
3 Survey of 212 farmers conducted in December 2014.
4 Karlan D., Osei R., Osei-Akoto I. et Udry C., “Agricultural Decisions after Relaxing Credit and Risk Constraints”, The Quarterly Journal of Economics 129.2, 2014; Ghada E. and Carter M., “Basis Risk and Compound-risk Aversion: Evidence from a WTP Experiment in Mali”, Index Insurance Innovation Initiative, 2014.
5 Agricultural processors can also be aggregators for micro-level coverage as the example of two Mozambican cotton companies shows.
In 2012- 2013, approximately 40,000 cotton contract farmers were insured. The farmers were informed of the coverage and the cost was deducted along with input costs from their delivery payment at harvest.
6 Skees, Jerry R. “Challenges for Use of Index-based Weather Insurance in Lower Income Countries.” Agricultural Finance Review 68.1 (2008): 197-217.

SME access to financing: capacities matter as much as resources