Increased containerisation of trade, changing infrastructure and more and more mammoth projects… for the past 20 years, African ports have enjoyed huge momentum. But the obstacles hampering development are many and port infrastructure still has a long way to go before it complies with international standards.

In 2011, some 2.63 million TEUs arrived in West African ports, including 0.705 million TEUs from Northern Europe and 1.925 million from Asia. In 2014, this figure had climbed to 3.313 million TEUs, a jump of 26% in just three years. Although this is an impressive increase, it needs to be placed in the overall context of containerised international trade: in 2015 for example, around 630 million TEUs were traded across the globe. Nevertheless, the growth in tonnage passing through major West African ports – 134% growth between 2009 and 2014 for the Port of Lagos; 100% for Pointe Noire (ISEMAR, 2016) – are a testimony to real dynamic growth.

This surge in container traffic in Africa has been driven by economic growth and upgrading of port facilities, notably in relation to port concessions developed in recent years, which have greatly enhanced technical capabilities: the advent of mobile cranes and quay cranes has speeded up handling considerably. 25 years ago for example, without proper port facilities, four or five containers an hour could be processed per team, whereas today this figure averages 15 containers. Despite considerable progress, the development of African ports is still being hampered by numerous problems.

African ports have experienced huge growth over the past 20 to 25 years thanks inter alia to more modern facilities and infrastructure made possible by greater private sector investment. This means that these big ports now have facilities and container throughput productivity rates closer to those found in Europe.

And while Africa is still a minor player in international trade terms – if global exports in 2014 are broken down, 3% came from Africa, 32% from Asia and 36.8% from Europe (WTO, 2015) – it has nevertheless become a key player with essential ports of call for the major international operators. The ports along the West African coast have become familiar territory for the big maritime transport companies. These include, unsurprisingly, the European heavyweights and big international players: A.P. Moller-Mærsk (Mærsk), Mediterranean Shipping Company (MSC) and CMA CGM. These companies are obliged to have a global footprint and to be able to serve their customers in all markets.

The operators present in Africa are increasingly looking towards Asia, and China in particular. In order to meet its gargantuan raw materials requirements – especially oil, mineral ores and rubber – China is in the process of deploying a comprehensive strategy to diversify its supply base. Africa is one of China’s key investment priorities and it has secured numerous infrastructure contracts, notably in the port sector.

The shift in commercial flows is now an established reality: 20 years ago, Europe was the predominant trading partner for both African imports and exports. Asia has now supplanted it, albeit not completely. While the picture varies from port to port, 40% (on average) of containerised foreign trade with Africa is now with Europe, compared with 60% with Asia.

The operators present in Africa are increasingly looking towards Asia.

It is fairly easy to understand why. Chinese exports, which boomed during the same period, essentially comprise cheap consumer goods which are highly attractive to the African market given its prevailing low living standards. But other factors are also at work. China is increasingly present in Africa as an economic superpower with considerable financial muscle and enormous resources. It is able to offer financing arrangements that other countries are unable to match.

The primary role of ports is to supply their countries and keep goods flowing through the many surrounding transit corridors that connect landlocked countries with no direct access to ports: in West Africa, this is the case for Mali, Burkina Faso and Niger.

The port sector in West and Central Africa is currently witnessing significant concentration although there are opportunities for new entrants. This monopoly situation combined with poor container flow and very long dwell times (frequently over 20 days on average) make African ports very expensive: if we just take container terminals, transit fees are often far higher than those in Europe (up to €1,500 for handling, warehousing and local delivery versus €250 to €300 in Europe).

While  lack  of  competition  goes  some  way  towards  explaining  these  higher  costs,  it  is  not the only factor at work. Historically, the French-speaking world often served as a model for these African ports, frequently resulting in cumbersome processes and excessive red tape. Until recently, they were run like state-owned enterprises. The number of checks operated by various state and security bodies before goods can leave port and a road infrastructure that is often saturated considerably increase processing times and ultimately, the cost of moving goods through African ports. In addition, road connections still present major difficulties that negatively impact the competitiveness of African ports: networks in disrepair, dangerous routes due to the risk of attack or sometimes no network at all. All of these factors generate increased costs and longer delivery times – and concern around one container per day delivered by truck – for journeys that may only be a few kilometres long.

ale can also help explain these high costs. Overall, African ports are fairly small and none figure on the list of major international ports: a big container port like Abidjan (Côte d’Ivoire) handles around 700,000 TEUs every year; 1.5 million TEUs went through the two terminals in the port of Lagos (Nigeria) in 2014. While these figures are impressive, they are still a very long way from the 20 million+ containers that pass through the port of Ningbo-Zhoushan (China), the 12 million+ that go through Rotterdam (Netherlands), or close on 10 million TEUs that go through Antwerp (Belgium).

WHAT IS THE WAY FORWARD FOR AFRICAN PORTS?

Although the Continent’s infrastructure does appear to have improved, much work needs to be done if Africa is to be in a position to compete with the world’s top ports.

African ports appear to be entering a “two-speed” system. Leaving aside North Africa – particularly Tanger Med with a great location in the Straits of Gibraltar – where ports are in a different league from those of Sub-Saharan Africa, there are legacy ports from a previous generation and other ports that are either planning to increase their capacity or have already done so. For example, Pointe Noire (Republic of the Congo) has built a 15 metre-deep quay to welcome the biggest carriers; plans are afoot to build two new ports at Lekki and Badagry (Nigeria), and two new container terminals are set to open for business in Tema (Ghana) and Abidjan (Côte d’Ivoire). Ports will eventually split into two categories: those with a maximum 10 metre draught,¹ and the others. The best-served African countries will be those that have developed deep-draught port infrastructure with enhanced technical facilities.

African ports face a massive challenge: staying in the race towards ever more enormous ports being spurred on by the big operators that is instrumental in redirecting bulk carrier traffic. Each new 18,000-TEU container ship port facility that comes on stream redirects 13,000-TEU vessels to other ports, which in turn redirects 10,000-TEU capacity ships towards other ports (hence the term “cascading”). This race to be big that is being driven by the major shipping companies is having a knock-on effect on the ports which are forced to accommodate ever-bigger ships and to upgrade their technical facilities. The fact that investment is being concentrated at the most modern ports, or those with the highest  potential  –  with  consideration  for  existing infrastructure and hinterland – risks leaving the least advanced African ports even farther behind.

Africa’s trump card remains its formidable dynamism and the growth opportunities it currently offers for the port sector. To stay in the race, it has to invest in improving service quality as well as in lowering transit fees. The challenge is there and certain African ports have already decided to take it up. 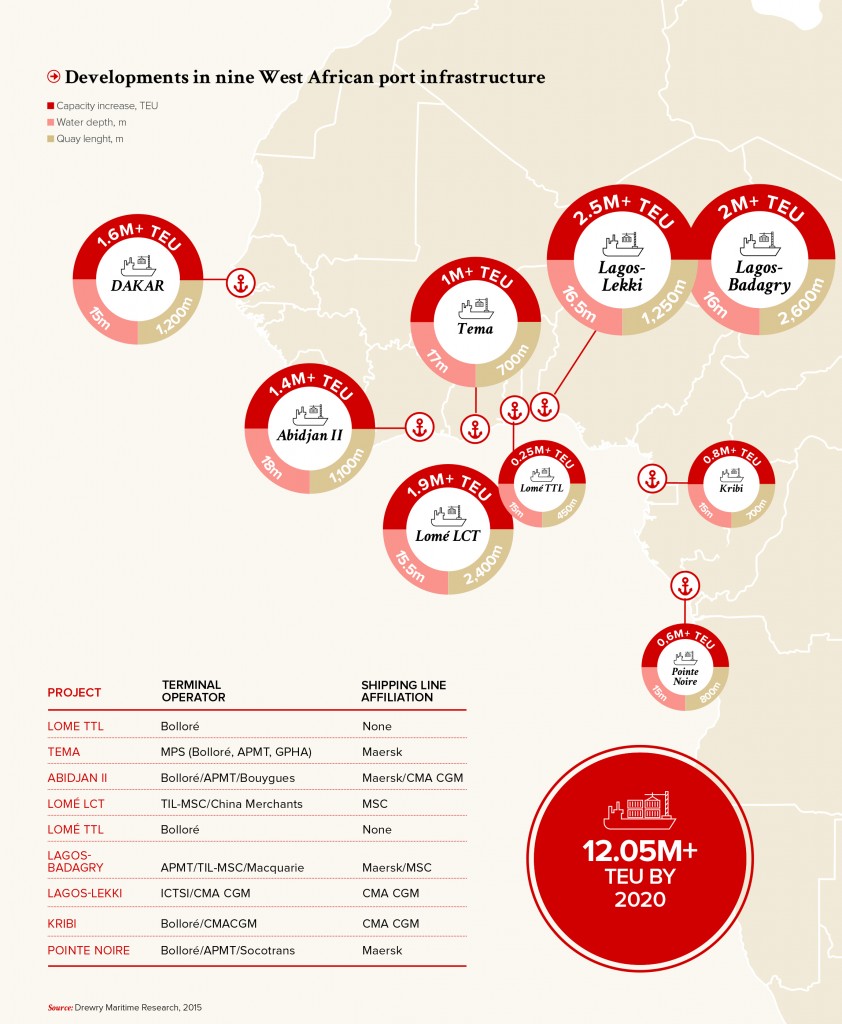 How to Develop Access to Water for the Most Disadvantaged Populations?