Why and how does Orange finance innovation in Africa?

Africa, which has already experienced some entrepreneurial success stories, is powering up and seeing the emergence of a new generation of entrepreneurs in innovation. However, digital Africa still focuses on a few epicenters, which receive the bulk of venture capital finance. The challenge will lie in repeating the Nigerian, Kenyan and South African successes in other regions on the continent.

Africa is on the move”, stated Barack Obama during his visit to Kenya in 2015, pointing out the spectacular digital revolution in the country of his ancestors. This revolution in Africa is mainly mobile. These major changes are based on mobile phones and their most simple technologies (SMS, USSD, etc.). It is commonplace to mention this “leapfrog”, which makes it possible to bypass shortcomings in infrastructure with mobile services for financial inclusion, energy supply, education, healthcare, etc. This has already resulted in success stories, such as Jumia, Interswitch, M-Kopa Solar, Andela, etc. This is precisely the gamble taken by Orange in making Africa a real growth driver. The Group today operates in 21 countries, has over 121 million clients, a turnover of EUR 5.2bn and a headcount of 20,000. More than one African in ten benefits from Orange’s services.

It is especially the new generation of entrepreneurs which is giving the continent all the momentum it is currently gaining.

While this revolution is based on the investments made by operators, it is especially the new generation of entrepreneurs which is giving the continent all the momentum it is currently gaining. An operator is a special player in this ecosystem. It is central to the process. Beyond its network, it is the gateway to the market, whether via its communication and billing interfaces (its API, or application programming interface) or, more simply, its network of retail outlets. Few players in Africa have a distribution network as extensive as an operator like Orange. Indeed, we have over 700,000 retail outlets on the continent.

BUILDING CLOSER TIES BETWEEN THE TELECOM OPERATOR AND THE STARTUPPER: A STRUCTURAL CHALLENGE

To reinforce its position as the African leader in the digital transformation, it was essential for Orange to include partnerships with innovative start-ups in its DNA. Innovations have gathered such a pace that the myth of the almighty power of large groups has been largely debunked, including on the continent.

Innovations have gathered such a pace that the myth of the almighty power of large groups has been largely debunked, including on the continent.

But being a natural partner of entrepreneurs is not a matter of course and requires two major changes, which the Group has made. Firstly, remedy a certain mistrust on the part of entrepreneurs for which the operator appears to be an inaccessible contact, yet is sometimes key to their scaling up. Secondly, the corollary is to overturn the culture of partnerships with startups in-house, via initiatives which facilitate the establishment of relations and decision-making. More generally, it involves taking a less defensive approach that is more open to co-creation. All this has been done in the context of the Group’s various Open Innovation programs. It is a challenge faced by all large companies and especially in French-speaking Africa, where there is still the widely predominant feeling that strength is measured by the rigor of procedures.

The positive dynamics for investors on the continent are continuing, in particular with the announcement of the creation of new funds, like Partech Africa […] or Tlcom Africa Fund.

Consequently, to address these issues, Orange has managed to build up a series of Open Innovation initiatives over the years. To name but a few flagship initiatives: training (Sonatel Academy with Simplon in Dakar, a Master’s to train data scientists in Abidjan in partnership with the polytechnic school and INP-HB), acceleration with the four Orange Fabs in the MEA zone, the social entrepreneur award, the partner incubators (CTIC, CIPMEN, etc.), the Orange Partner and Bizao programs to open access to the Group’s APIs and, recently, investment in start-ups. Indeed, investment is a particularly effective tool for improving the Group’s capacity to “connect” with innovative actors. This is both because it meets a simple and practical need of companies, and because they are decisions which can be made rapidly, as long as there is appropriate governance. Finally, it is often a sound basis from which to build sustainable partnerships. 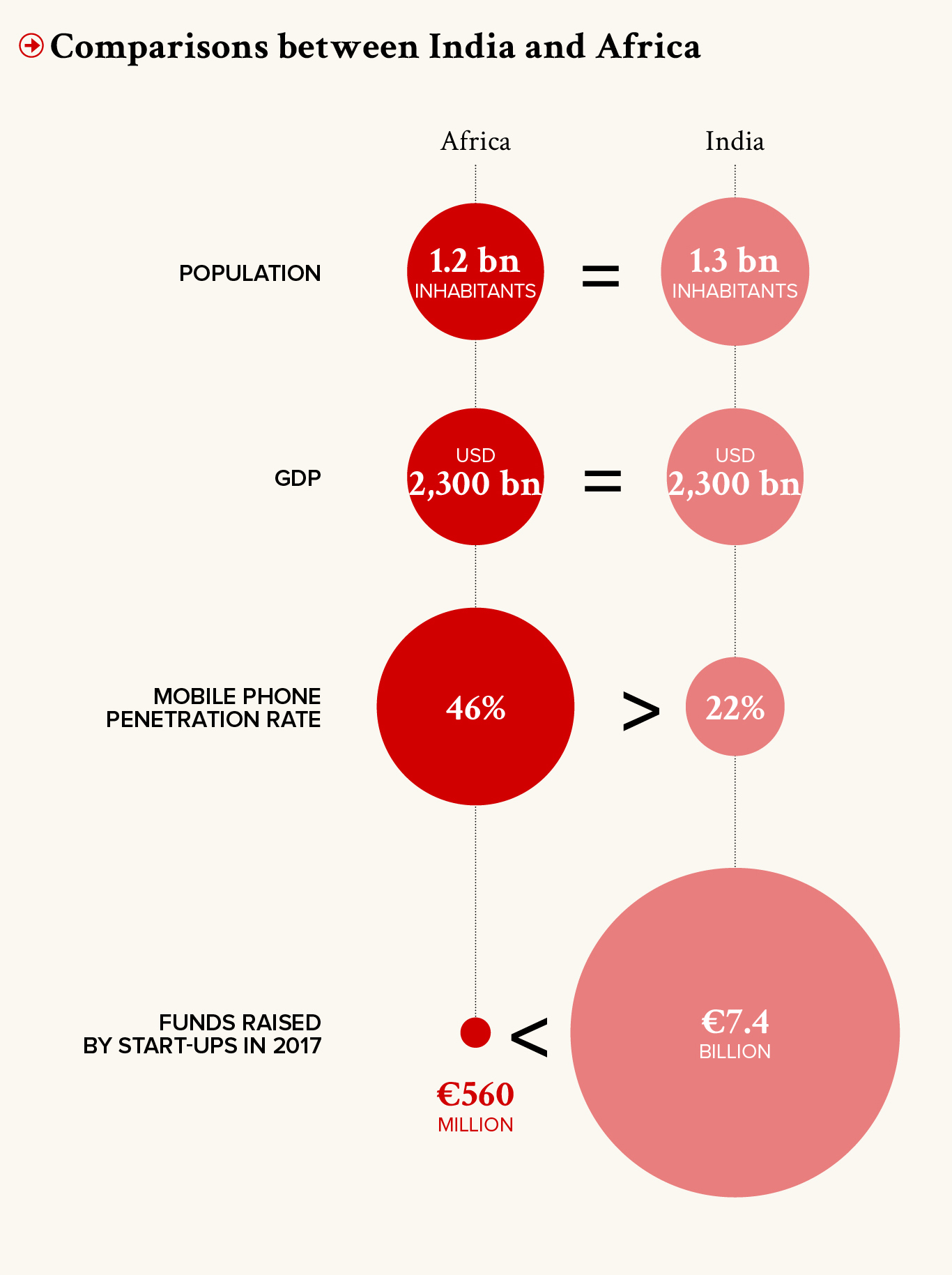 This is what the initiative of Orange Digital Investment (ODI), the Group’s strong arm in digital investment, is all about. Indeed, Orange Digital Investment covers three types of activities: Orange Digital Ventures (ODV), which directly invests like a venture capital fund in minority tickets in early-stage start-ups in the context of appropriate governance, with a presence in Paris, London and, since recently, Dakar; investments in funds of funds: Iris Capital, Partech Africa, Paris Saclay Seed Fund, etc.; and more late-stage corporate venture investments (strategic digital monitoring and equity investments, such as Jumia, Deezer and Dailymotion).

Our investment strategy is to leverage our assets in Africa […] in order to support start-ups which have already experienced strong growth in their domestic market and aim to rapidly go international.

In June 2017, during the Afrobytes conference, Pierre Louette, Deputy Chief Executive Officer of the Group and Chairman of Orange Digital Investment, announced the launch of Orange Digital Ventures Africa (ODVA), a EUR 50m fund based in Dakar dedicated to African startups. Through this new initiative, Orange has completed its system with a specifically African program. Investments in start-ups with activities related to the continent (or adapted to this market) had already been made by ODV, such as Afrimarket, Afrostream and PayJoy. However, given the opportunity offered by Africa and our ever-increasing commitment to support its digital emergence, it was necessary to scale up in order to fully grasp the opportunity related to this African digital revolution.

Consequently, ODVA is investing up to EUR 3m for a first round, following the start-up rounds, with the capacity of following in the subsequent rounds. The investment themes are in line with the Group’s strategic priorities in the zone: fintech, eHealth, energy, agritech, govtech, edutech, etc. Our investment strategy is to leverage our assets in Africa (client base, distribution network, API, Orange Money…) in order to support start-ups which have already experienced strong growth in their domestic market and aim to rapidly go international.

It all involves becoming, through investment, a fully-fledged player in the digital revolution by being a partner of the future pan-African champions of tomorrow, whether they are based in Africa or elsewhere. The presence of the fund in a French-speaking country makes it possible to reach territories where there are a wealth of opportunities and which are often neglected by international investors. Orange Digital Ventures aims to combine the best venture capital with the best assets of a large group like Orange. Consequently, as an investor, ODV has the objective of maximizing the financial return, but also aims to create strategic value for the Group, to accelerate sustainable partnerships with innovative actors or, more simply, the learning process for new economic models, new products or technologies. For ODV, it is a way of providing strategic value to the entrepreneurs it supports. ODV also ensures that it maintains a barrier between the investment team and the rest of the Group in order to avoid conflicts of interest, the circulation of sensitive information, etc. Finally, ODV is an evergreen fund which styles itself as a long-term financial partner, unlike other more traditional investors.

AFRICA AS A NEW FIELD FOR INVESTMENT IN INNOVATION

The positive dynamics for investors on the continent are continuing, in particular with the announcement of the creation of new funds, like Partech Africa (of which Orange is one of the partners) or Tlcom Africa Fund (TIDE). An instructive comparison with India clearly illustrates Africa’s potential: a relatively similar population (for Africa and India, 1.2 and 1.3 billion inhabitants, respectively) and a GDP equivalent to USD 2,300bn. Yet Africa’s mobile penetration rate is double that of India (46% against 22%), but in comparison Africa’s startups only raised EUR 366m in 2016, according to Partech, against EUR 4bn for Indian start-ups over the same period. This clearly illustrates the growth prospects we could expect for the continent’s digital ecosystem. Pending the confirmation of these dynamics by emblematic “exits”, it is today that we need to support the “gazelles” of tomorrow.

However, this optimistic description should not hide the fact that digital Africa remains very scattered between just a few hubs mainly based in English-speaking Africa. One of the main questions that remains is how to reproduce the Kenyan, Nigerian and South African digital dynamics in other regions, in particular in French-speaking Africa which is sorely lagging behind. The example of the Kenyan model underscores the role that the traditional operator played in the emergence of its digital ecosystem. Indeed, the successful launch of a mobile money range of services and the opening of its APIs played a key role by giving entrepreneurs the means to invent new services. Orange has taken this route with optimism. There are still just a few ingredients missing for the digital French-speaking Africa to actually emerge (seed funds and business angels, accelerators, proficiency in languages, etc.), but there are sound bases: a huge market of 120 million people in 24 countries, connected and welltrained young people who increasingly aspire to be entrepreneurs in innovation, monetary stability, previous entrepreneurial success stories (Intouch, Wari, Afrimarket, etc.), and a generation of “repats” (a population from the diaspora, educated in Europe or the USA, which settles on the continent) with a wealth of expertise, international networks and enthusiasm for achieving its “African Dream”.

Internet throughout the world: what’s the state of play?

What role can DFIs play in promoting the development of the African venture capital ecosystem?