A blog coordinated by Proparco
Home » Agri-business » The role of agribusiness in development: a long-standing debate
Agri-business Agricultural production

The role of agribusiness in development: a long-standing debate

Agribusiness and its role in economic development has given rise to much debate. Although it is frequently perceived in terms of negative externalities, it remains a solid vector for creating jobs and reducing poverty. However, agribusiness needs to resolve issues relating to the inclusion of smallholders, respect for the environment, product quality and price competitiveness.

The role of Agribusiness in economic, social and environmental development is a hot topic and the origins of certain debates can be traced as far back as the eighteenth or nineteenth centuries. Indeed, the work of Adam Smith and later David Ricardo linked the wealth of nations to the production structures of economies and to their specialisation in terms of their comparative advantages.

This article is an excerpt from Issue 30 : Corporate governanceBetween 1940 and 1960, research in what would later become development economics empirically demonstrated that economic growth is accompanied by a continual decline in the primary sector (especially agriculture) in favour of the industrial sector (particularly manufacturing), which subsequently loses ground to the services sector. The reasons for this phenomenon are hotly debated as the resulting conclusions have a major bearing on public policy options. It is therefore important to know whether this “structural transformation” flows “naturally” from processes of growth and opening up trade for example, or whether proactive industrialisation policies are actually needed to boost development. Such policies are often advanced as an explanation for the “Asian miracle” of the 1990s and they currently inspire numerous growth strategies, especially given that the manufacturing sector, particularly textiles, supposedly has the most potential for reducing poverty and generating employment (Cadot et al., 2015). Nevertheless, around the early 2000s, certain African and Latin American countries began deindustrialising without having achieved the industrial development and growth peaks that tended to usher in a growth in services in developing countries. Economists continue to argue in the wake of this “premature deindustrialisation” (Rodrik, 2016): will the textile industry fuel Africa’s economic growth? Or should we bet on services? And what about agribusiness which impacts all three sectors?

The agri-food sector: creating jobs and capable of reducing poverty

In this issue, we will use the term agribusiness in a broad sense. It includes processing agricultural commodities, packaging and distributing them as marketable products as well as the related services (supplying fertiliser, seed and equipment) and, by extension, all agricultural production systems. While the agri-food sector sensu stricto only includes food processing and supplying inputs, in practice, the contractual, institutional, functional and dependency ties between processing and production mean that we cannot really think of them separately and they are very often integrated (Barrett et al., 2001).

In its 2008 World development report, the World Bank insisted on the need to invest in agriculture and agribusiness to boost growth and reduce poverty. Ten years later, a number of researchers are revisiting these findings and emphasising the role of agribusiness in economic development.

A number of indicators appear to show that agricultural processing could become a key sector for developing economies, especially African ones.

As regards the upstream components of the value chain, two observations should be made: while historically, structural economic transformation processes are characterised by a decline in the share of agriculture in the economy, they also features enhanced productivity. This means that even an exclusively industrial development policy does not mean having to abandon investments in the agricultural sector. Indeed, in view of its positive impact on non-GDP indicators, agriculture would appear to have an even stronger role in development. Christiaensen et al (2011) have demonstrated that growth in the agricultural sector has a very powerful poverty reduction impact (i.e., on the number of people living on less than 1$ a day).

At the other end of the value chain, a number of pointers appear to show that agricultural processing could become a key sector for developing economies, especially African ones: according to the World Bank, thanks to the combined effects of demographic and urban expansion and growth in incomes, agri-food already represents a substantial market that should top the US$ 1,000 billion mark by 2030. Indeed, food economy is already a growth vector in a number of respects: in West Africa, it provides 66% of all jobs and 40% of total value added in the sector is attributable solely to agribusiness (excluding agriculture) (Allen and Heinrigs, 2016). Food processing represents 60% of total manufacturing employment in Niger and Nigeria, and between 30% and 40% in Ghana, Burkina Faso and Mali (Allen et al., 2018, data 2012-2015). In five East African countries, agribusiness represents between 27% and 64% of the manufacturing sector’s contribution to GDP. 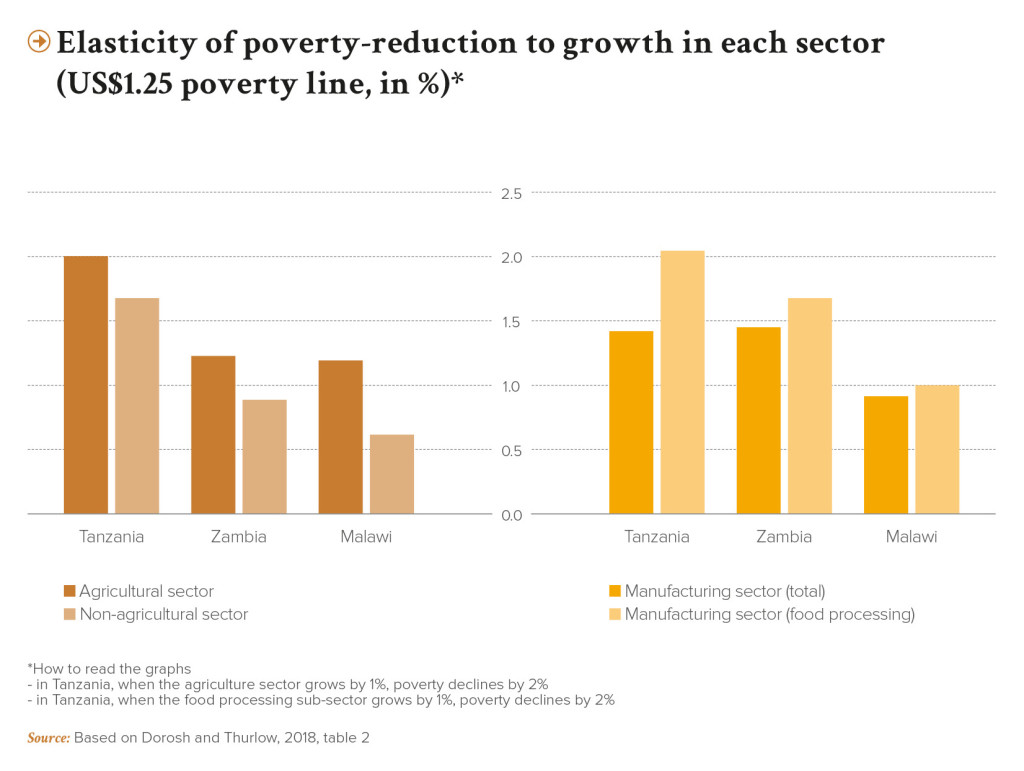 In the same five countries, Dorosh and Thurlow (2018) have shown that the reduction in poverty is always greater when growth is driven by agriculture rather than by any other sector. And, still more interestingly, in those cases where the manufacturing sector’s ability to reduce poverty (figure 1) rivals that of agriculture (i.e., in Malawi, Tanzania and Zambia), this is because manufacturing comprises a significant agribusiness component. Indeed, food processing has very strong knock-on benefits for the economy as well as a capacity for creating value added throughout a territory. Unlike the textile sector which often depends on imported raw materials for use in simple manufacturing processes and export outlets, agribusiness in Zambia for example uses local raw materials, the bulk of which are processed for the local market. The growth of secondary cities in Africa has generated local agri-food demand with the related possibility of gradually moving the offering upmarket, a possibility not offered by the textile industry which targets international markets with very high entry costs. And certain researchers have pointed out that increasing automation in the textile industry means that it is no longer capable of absorbing the millions of people who will arrive onto the labour market (Artuc et al., 2018).

Consequently, a number of emerging country governments (e.g., Cameroon, Ethiopia, Nigeria…) have factored agribusiness into their industrialisation strategies. However, if it is to play its role to the full, a number of environmental and social pitfalls need to be avoided.

Agribusiness, environment, equity: the pitfalls to be avoided

The reason why agri-food is often seen as the antithesis of sustainable development is because of its perceived negative externalities both for the environment (Barrett et al., 2001) and for small producers (Reardon et al., 2009).

Revisiting the last few decades of the twentieth century, Reardon, Barrett et al recall that deregulated globalisation, lower tariff barriers and transport costs, price wars and technical progress have all shaped agro-industrialisation, i.e., the tendency toward vertical integration, the scramble for higher yields, use of intensive chemical inputs and downward pressure on producers’ prices, etc. While the externalities from this wave of agro-industrialisation are not systematically negative, when they are, the price paid tends to be very high both for the environment (deforestation, GHG emissions, biodiversity loss, soil depletion and pollution of aquatic environments) and in terms of equity (exclusion of smallholders from the market or even from their own land if traditional land rights are not protected, inequitable distribution of value within channels controlled by dominant firms (BASIC 2014), poor working conditions, etc.).

Agro-industrialisation that complies with sustainable development principles is possible if it manages to include small producers, respect the environment and remain competitive from both a price and a quality perspective, even in the face of fierce international competition

On the other hand, technical progress makes it possible to develop crop varieties that consume less water and international export outlets can help secure long-term agricultural employment and avoid land artificialisation (Barrett et al., 2009). The record is therefore a mixed one.
In reality, the conditions under which agro-industrialisation takes place play a determining role: national regulations can provide a framework for preventing, reducing or offsetting negative externalities insofar as its development is actually being controlled – which is not necessarily the case in countries with insufficient technical, financial and human resources. Voluntary CSR-type initiatives or certified standards can also be favourable factors. Lastly, stronger demand for higher-quality, eco-friendly products and fairer trading practices can enhance environmental and social performances.

In other words, agro-industrialisation that complies with sustainable development principles is possible if it manages to include small producers, respect the environment and remain competitive from both a price and a quality perspective, even in the face of fierce international competition. This issue of our magazine will primarily focus on providing at least some answers to these questions which are crucial to several of the UN’s sustainable development goals (SDGs) (i.e., hunger, poverty, employment and sustainable production and consumption methods).

1 See Vergne and Ausseur (2015) for an overview of the different debates.
2 Whose intensity may be measured by the elasticity of poverty to growth in the sector (poverty declines significantly when the sector grows by 1%).
3 “backward linkages”