African industrial development is a major challenge for the Continent and it is currently a key focus for governments, financial backers and investors. Although still in the early stages of development, industry offers significant opportunities for absorbing the millions of new workers entering the African labour force every year. However, this industrial development must be consistent with a carbon-light approach as well as respect for biodiversity and ecological concerns.

Calls to industrialise the African Continent have never been as urgent. Governments, investors, consultants and financial backers – everyone appears to recognise the potential here. And there is a lot at stake: Africa currently contributes less than 2% of global manufacturing and industry and only accounts for 5% of African jobs. Yet, neither agriculture nor services will be able to absorb the millions of new workers entering the African labour force every year1.

The bulk of African countries have to contend with a tough business environment. Their almost exclusive dependence on commodities, price volatility and the modest level of technology in their manufacturing activities tend to leave the Continent in a vulnerable situation. With the exception of the Maghreb region and South Africa, African countries have a manufacturing value added (MVA) of less than 100 dollars per inhabitant2. And this African MVA is directly linked either to natural resources or to low-tech activities with limited productivity. Nevertheless, a new argument is gaining traction: Africa’s underdeveloped industry should be considered a strength rather than a handicap. Not having gone through the different stages of industrialisation means there are no scars from the past: the technological leap makes it possible to jump directly to the production methods most compatible with decent labour standards, a low-carbon approach and resilience to climate disruption3.

Industrialisation has become a big theme in all programmes associated with the “African emergence”4. In particular, it is a central plank in achieving the goal of Agenda 2063 (“The Africa we want”) adopted by the African Union. This new-found enthusiasm for industrial strategy may be found in the official plans or national industrial strategies of all African countries: the Industrial Policy action Plan (2014-2030) of South Africa, Cameroon’s Plan directeur d’industrialisation (Vision 2035), the Kenya National Industrial Policy Framework (Vision 2030), Plan d’accélération industrielle du Maroc (Morocco), Industrial Policy Implementation and Strategic Framework (2012-2030) for Namibia, Rwanda Industrial Plan (Turning Vision 2020 into Reality), and the Integrated Industrial Development Strategy (2011-2025) for Tanzania, etc. These strategies have identical features such as capitalising on mining, timber or agricultural resources, creating the conditions for an improved business climate (business start-up procedures, one-stop shops, online tax declarations, etc.), focusing on public-private partnerships, promoting joint ventures or harnessing the technologies of the 4.0 industrial revolution5.

Three questions predominate in the discussion about future industrial strategy for Africa and the responses help shape the policies of the different states.

THE RETURN OF IMPORT SUBSTITUTION

In the face of the constraints of integrating global value chains, import substitution is in fashion once again. At present, the model of reference is most often designed on a regional basis. The movement is a promising one, with the launch in 2019 of the African Continental Free Trade Area (AfCFTA). In March 2020, the Economic Commission for Africa (ECA) encouraged states to accelerate the process of getting the free trade area up and running, battling the impact of the coronavirus pandemic and curtailing the Continent’s dependence on outside partners, particularly for pharmaceuticals and food. The opportunity for coming up with a new development model has been clearly set out. Reducing regulatory and customs barriers should help, together with the emergence of a middle class to actively participate in shaping a proper internal market that is already worth some US$ 250 billion6.

In the face of the constraints of integrating global value chains, import substitution is in fashion once again. At present, the model of reference is most often designed on a regional basis

A number of countries are setting up clusters focused on vertical technology transfer and reducing transaction costs – especially tax-related costs – within an innovation-conducive industrial space. Such projects may involve diverse arrangements. Export Processing Zones (EPZ) represent the most complete examples and there are around a hundred of these in 20 countries including Algeria, Egypt, Ethiopia, Mauritius and Zambia. EPZs are a widely-used system, especially by China in Africa. Otigba Computer Village in Lagos, Nigeria, represents a different type of model. It was created spon-aneously by the stakeholders themselves and focuses on Information and Communications Technology (ICT) and promoting SMEs. But clusters are not necessarily the wonder solution when competition between different countries leads to “a race to the bottom” and the zones themselves become a lawless jungle for workers.

Most industrial conventions include a requirement that operators give priority to national suppliers on condition that their prices, quality, quantities and terms and conditions of delivery do not make them more expensive than foreign suppliers.

Local content here refers to measures requiring foreign investors to use a certain proportion of local resources in the production of goods and services.

In Africa, local content obligations have been implemented, especially in the operating codes of mining and oil companies. Most industrial conventions include a requirement that operators give priority to national suppliers on condition that their prices, quality, quantities and terms and conditions of delivery do not make them more expensive than foreign suppliers. Most conventions also contain clauses to promote the employment and training of local people – the operating company should at the very least give priority to hiring local labour when it is just as skilled as expatriate labour. Certain conventions provide for a gradual replacement of expatriate with local workers. Some legislation goes even further: since 2016, Cameroon has imposed quotas of 90% of local people for unskilled positions. 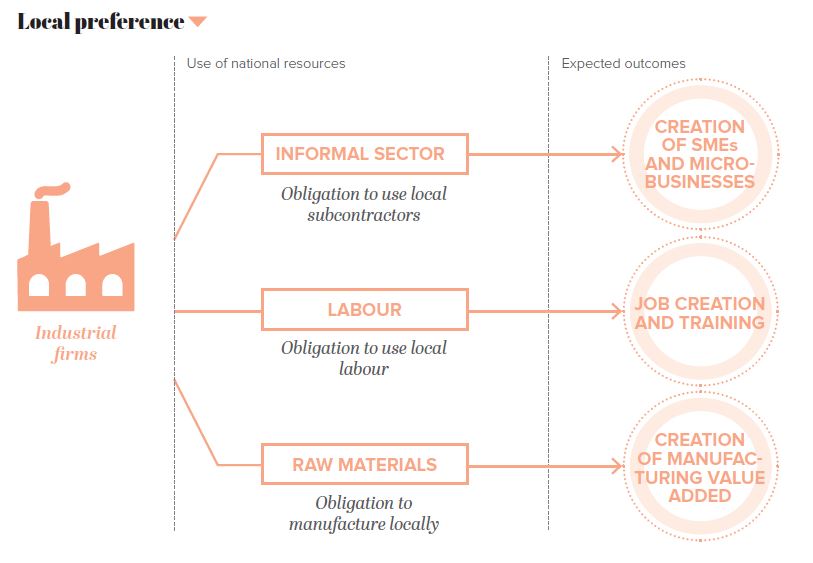 Local content obligations are reflected in regional industrialisation programmes (see insert) and they are underpinned by rules of origin. Companies based in certain regions – often linked to big international groups – find it easier to import pre-processed products, which they then package locally and stamp as manufactured in the free trade area, before distributing them within the region. Nigeria considers itself a victim of this type of Trojan Horse and it has gone as far as to close its borders to imports from neighbouring countries since August 2019. If such products get the same tax breaks as locally manufactured products, regional preference will lose all of its meaning and impact.

But there is a counter-argument. For example, withinthe Economic Community of West African States (ECOWAS), a product may be deemed as having been produced in the Community if the manufacturing value added of the raw materials from outside used in its production account for less than 30% of the ex-works cost price, and if the producer company reaches a pre-agreed level of local participation. But we need to be careful here. If rules of origin are too restrictive, they may prevent imports of intermediate inputs from outside countries, thus jeopardizing both specialisation and competitiveness. For these reasons, the African Continental Free Trade Area (AfCFTA) will probably use a more straightforward rule such as requiring that 50% of the added value must come from Africa. The aim is to turn rules into regional development instruments that will drive job creation and innovation.

The challenges of African industrialisation can only be met through effective public institutions and a concerted public and private sector approach. Industrial policy can be enhanced by including a significant component of decent jobs and introducing an ecological focus before technological options are factored in

THE GREENING OF INDUSTRIALISATION

Could Africa become the poster-child of a “carbon-light” and biodiversity-centric industrial development model? The Economic Commission for Africa (ECA) believes it can7. It has identified four measures that need to be deployed: 1) incorporating environmental standards into national regulations; 2) “greening” public infrastructure and incorporating resilience into both projects and standards; 3) phasing out subsidies for fossil fuels; and 4) “decoupling” economic growth and the consumption of raw materials and fossil fuels. The ECA considers that central government should play a major role in formulating and promoting a new type of industrial vision between now and 2030.

The challenges of African industrialisation can only be met through effective public institutions and a concerted public and private sector approach. Industrial policy can be enhanced by including a significant component of decent jobs and introducing an ecological focus before technological options are factored in. In the challenging post-Covid-19 period, setting up platforms for sharing best practices, underpinned by powerful regional momentum could be a very useful strategy.

“Investment in agriculture as a key poverty reduction lever”