Back in 2005, Total introduced an ambitious biodiversity protection programme. Today, the Group is committed to protecting the environment at both local level («biodiversity action plans» for new projects, for example) and global level (helping to prepare a Global Biodiversity Plan). Total sees this commitment as an opportunity and an essential investment in its own future.

Total’s biodiversity journey began in 1992 with the creation of the Total Foundation and its philanthropic initiatives to protect marine ecosystems. This environmental focus culminated in the Group’s biodiversity policy in 2005. In 2016, Total pledged its commitment to the UN Sustainable Development Goals (SDGs) and in 2018 it signed up to the “Act4nature” initiative backed by the French Association of businesses for the environment (Association française des entreprises pour l’environnement). Most recently, in 2020, the Group helped to prepare a Global Biodiversity Plan as part of the UN Convention on Biological Diversity (CBD) at COP15.

This unstinting and longstanding commitment to protecting biodiversity means that Total can now draw upon its extensive experience both in terms of local biodiversity management initiatives and its global CSR strategy. It has also provided new opportunities for growth and helped prepare the Group to meet future challenges.

These undesirable impacts, of varying nature and extent, are primarily due to changes in the way in which environments are used, for example when an industrial facility and related infrastructure are located in a natural area. However, chronic pressure may also be exerted on biodiversity. This could take the form of gaseous and liquid discharges or noise pollution. And while they are rare, accidents may also harm the environment.

Renewable energy generating facilities may put pressure on biodiversity. For example, solar farms may lead to a partial conversion of a natural habitat or wind turbine rotor blades can be dangerous for avifauna.

These local issues are compounded by the overriding urgency of climate change and its impact on biodiversity. Here, Total is aiming to achieve carbon neutrality by 2050 along with a number of key milestones, including the production of 35 GW of electricity from renewable sources by 2025.

To tackle all of these local and global challenges, Total has had a specific biodiversity management and protection policy since 2005. In particular, it introduced a mitigation hierarchy (“avoid, minimize, offset”)2. Biodiversity was mainstreamed into the environmental management system at Group sites and subsidiaries: initial studies, impact studies and tracking of biodiversity management initiatives during operations all became systematic.

In 2020, Total made “biodiversity action plans” compulsory for all projects located in the most sensitive areas3 (there have been around 10 such projects up to the present — see Insert). For sites located in priority areas4, these action plans must generate a “net biodiversity gain”5 certified by a third party, as will be the case for the Tilenga oil exploration project in Uganda. But this measure does not just apply to new projects. Certain longstanding sites located in highly industrialised regions are also deploying an environmental approach. This is happening at the Feyzin refinery in France where the site’s plant population has been carefully mapped and differentiated management strategies have been deployed (especially with regard to mowing). Around a quarter of the site has now been made available for developing local biodiversity. From now on, the company will systematically perform “biodiversity diagnostics” in and around its sites that are important for the environment, i.e. sites that have been certified ISO 14001. The first diagnostics will be performed in 2021 and, depending on the results, they may culminate in new pro-biodiversity initiatives.

The commitments and processes that underpin this improvement drive are reflected in a major effort to mainstream pro-biodiversity initiatives into the Group’s internal rules. For example, biodiversity is mainstreamed into the Group’s risk assessment process (known as “CORISK” ) whose criteria — which are evolving by nature — were updated in 2020 with the publication of the Group’s Biodiversity Ambition. Manuals explaining biodiversity management methods and decision-making applications are also available to provide concrete solutions to the project teams in charge of these matters out in the field. Biodiversity mainstreaming is rounded out by a biodiversity training program for Group employees that covers awareness-raising (provided by the French Natural History Museum) through to best current practices (in particular those defined by the World Bank Group’s International Finance Corporation).

Finally, the Group has also decided to avoid certain highly environmentally sensitive areas altogether. For example, in 2012 Total ceased all oil exploration activity in Arctic Sea ice zones. These are highly sensitive natural areas in which it would be very difficult to deal with an accidental oil spill. Total is currently the only energy major to have made this commitment. This was followed in 2013 by a decision to ban all exploration and production activities at UNESCO World Natural Heritage Sites6 in recognition of their universal heritage value. 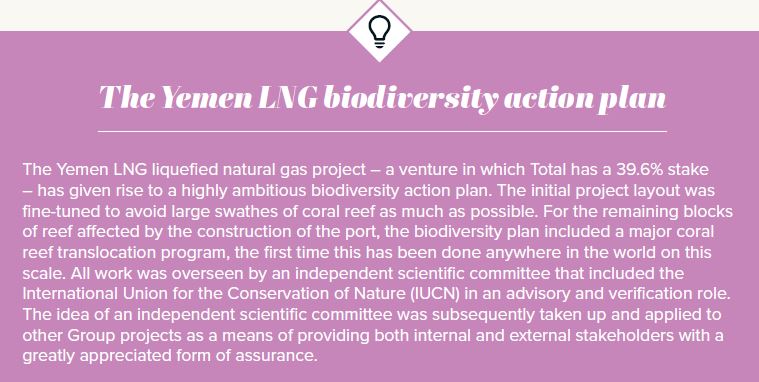 Total’s mainstreaming of biodiversity has generated a number of partnership opportunities, notably with certain international NGOs7. This commitment has also enabled Total to influence the entire sector: other energy majors such as BP and ENI have agreed to steer clear of UNESCO heritage sites, for example. Moreover, Total has been named oil sector representative for the UN Convention on Biological Diversity’s Extended Consultative Network to prepare support documents8 for the Global Biodiversity Plan that include sector best practices. Total was also able to provide input on “biodiversity approaches” for organisations in the new AFNOR NF X32-001 standard.

The Group participates in scientific research, especially by sharing the data collected in the course of its studies and for monitoring biodiversity at its sites – this data is made available on the Global Biodiversity Information Facility, the international platform of reference in this domain.

Total’s mainstreaming of biodiversity has generated a number of partnership opportunities, notably with certain international NGOs.

Total is also conducting forward-looking studies on indicators to measure its “biodiversity footprint” and considering how best to factor in the effects of climate change on biodiversity. All of this research and reflection helps prepare the Group for the future.

Towards eco-systemic concessions: an introduction to the coming age of forests