For the past two years, Proparco and its European counterparts have been on the front line in tackling the economic crisis caused by the Covid-19 pandemic. Through record financial commitments and a wide range of tools, DFIs have deployed an extensive recovery plan in Africa to support the financial sector and MSMEs. They have been effectively fulfilling their countercyclical role in this difficult economic context.

The pandemic has caused a slowdown in economic activity in most African countries, although it has turned out to be not as bad as initially feared. In 2020, there was a decline of 1.9% in Africa, against 3% estimated in early 2021. However, last year, most African economies – 40 out of the continent’s 54 countries – experienced the worst recession they had ever seen. The magnitude of the economic shock caused by the Covid-19 epidemic means that it will take a long time for its consequences to die down. Total production losses attributable to the pandemic could reach up to 12 percentage points of African GDP in 2021, with major repercussions on employment, which had already fallen by 8.5% in 2020.

In this context, per capita income is only expected to return to its pre-crisis levels between 2022 and 2025, depending on the country. This will result in an increase in poverty for 32 million people in Sub-Saharan African countries alone. Africa’s MSMEs, which account for up to 80% of jobs in the formal sector, have been the hardest hit. Many of them have had cash flow problems, especially in sectors such as catering, tourism and transport. Workers in the informal sector and the most vulnerable people have also felt the full brunt.

This tight economic context has also made it even more difficult for African MSMEs to access finance. Despite the progress already achieved, small businesses and microentrepreneurs remain underserved and may no longer have access to financing if the lending activity is slow to recover.

Faced with an unprecedented crisis in terms of its scale, duration and consequences, banks have often taken a cautious approach in order to maintain the best possible control over the deterioration of their loan portfolios. They have consequently limited loans to MSMEs and shifted their activity towards the least risky assets, such as Treasury bills. Before the crisis, only 20% of MSMEs benefited from bank financing and this proportion has since fallen sharply.

From the outset of the health crisis, regulators took strong measures to ensure financial stability, which has reduced the risks of a systemic failure of the banking sector. The strategic measures adopted include reducing the base rate – which has a positive effect on overall demand and the ability of households to repay their debts – , lowering the ratios of banks’ liquidity reserves, setting up programs for government bond purchases, and establishing a moratorium on the loans allocated by banks.

In addition, Proparco, like its European counterparts, very quickly sought to meet the demands of financial institutions facing cash flow problems due to the difficulties encountered by their clients, in particular non-banking financial institutions. The latter, like certain microfinance institutions, do not collect deposits from their clients and are therefore heavily reliant on bank financing. It is for this reason that Proparco accepted repayment deferrals, on a case-by-case basis, to allow them to overcome temporary difficulties. It has also played a countercyclical role by maintaining its commitments for financial players focused on MSMEs, such as microfinance institutions, leasing companies and banks. 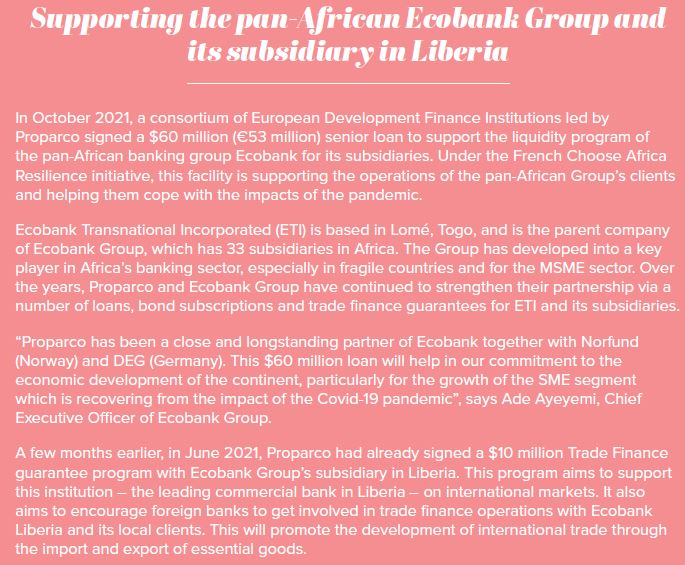 In this uncertain environment, Proparco has also mobilized various risk-sharing tools from France and the European Union (EU) to step up its supportfor its clients.

Proparco’s operations in the financial sector increased in 2020 and even more so in 2021, with a record level for both credit lines and risk-sharing facilities. Last year, Africa benefited from almost €1 billion of credit lines and risk sharing, mainly under the Choose Africa initiative and its Resilience component, which has been topped up with an additional €1 billion to support the recovery in Africa. In this uncertain environment, Proparco has also mobilized various risk-sharing tools from France and the European Union (EU) to step up its support for its clients.

In addition, Proparco has used its wide range of tools to support financial institutions, in particular short-term credit lines, resources to strengthen the equity of its clients and, especially, risk-sharing facilities, for which there was strong demand in 2021, to both cover medium and long-term SME loans and help maintain trade finance lines for African banks. Finally, with Digital Africa, it has supported African start-ups which have had difficulties raising funds due to the crisis. €4 million of bridging loans have been allocated to ten start-ups via the Bridge Fund by Digital Africa. This has put these companies in a more comfortable position to face the crisis. 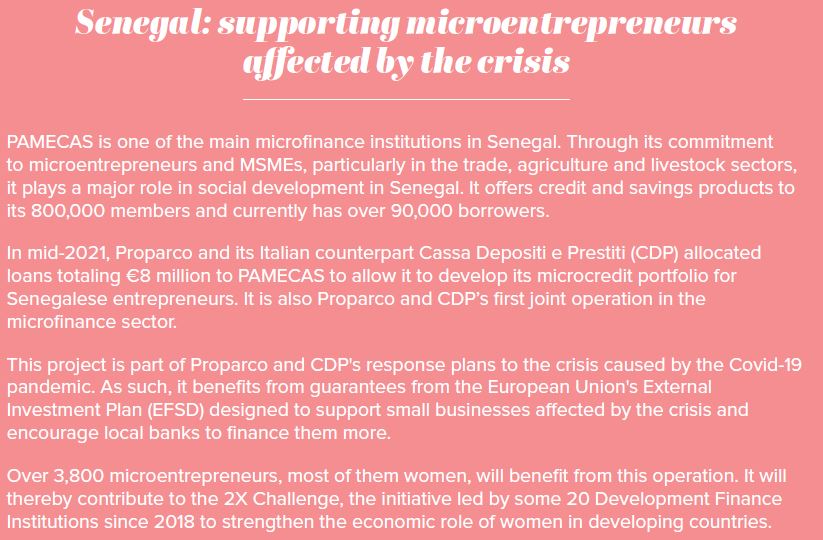 MAIN LESSONS LEARNED FROM THE MANAGEMENT OF AN UNPRECEDENTED CRISIS

While remaining humble and cautious due to the still uncertain health situation, it is nevertheless possible to note that this crisis has demonstrated the ability of States to take action to support their financial sector, which is essential for the development of the economy. Banks, leasing companies and the other financial institutions play a key role in MSME financing, which is especially necessary in times of crisis. However, the quality of banks’ portfolios is still under pressure and, due to the provisions required, they may need to restore their solvency in a second stage.

Another lesson we have already learned from the crisis is that having a network close to clients is a real advantage when it comes to providing a swift response. Through its network of a dozen or so offices across Africa, Proparco has been able to monitor the macroeconomic developments and rapidly identify its clients’ needs. Similarly, it seems essential to be backed up by a wide range of tools with varied risk profiles in order to meet multiple needs: senior credit lines to support the allocation of new loans, strengthening of the equity and quasi-equity of financial intermediaries whose clients are affected, risk-sharing with banks for its most affected client segments, Trade Finance guarantees when international banks are reluctant to make commitments in Africa, and grants to finance expertise for bank clients seeking to make progress in certain thematic areas (the climate and financial inclusion, for example) or emergency measures.

Finally, the important role played by France and the EU, which have allocated risk-sharing facilities to Proparco, has increased Proparco’s capacity to take action in deteriorated situations. It would appear crucial to have this type of tool, with the greatest possible flexibility to adapt to the many situations encountered, in order to play the countercyclical role expected of Development Finance Institutions.

A key ingredient for Africa’s growth: investing in women entrepreneurs

The difficulties bank face in financing SMEs in Sub-Saharan Africa