There is a gradually rising trend in developing countries towards more professionally managed urban drinking water services as a result of delegation to private companies. The integration of a new generation of often small-scale national private operators into water distribution networks certainly contributes to the implementation of a public service of good quality. It is, however, also a new and complex challenge that States and donors must address toda.

A recent World Bank study (Marin, 2009)¹ analyzes the experiences of the last fifteen years in terms of public-private partnerships (PPPs) for urban water and sanitation services in developing countries. As the World Bank itself had widely advocated the systematic use of PPPs in the 1990s – before taking a more moderate position – this study was keenly awaited. The publication bears witness to the emergence of a second generation of PPPs in developing countries; the private sector may have been serving an increasing number of people since 2000-2002, yet there has been a radical change in the type of operators intervening.

At the outset, private operators were mainly major international companies, particularly French companies (Générale des Eaux – Veolia, Suez – Lyonnaise des Eaux, SAUR). Although there was a sharp drop from 2000-2002 onwards in the involvement of these major groups, which were replaced by a new generation of national operators, they do still remain dominant. Indeed, when the first public-private partnerships were implemented in the water sector, there was no local offer available from private players. It was consequently necessary to turn towards major international companies that already had the required experience and know-how.

Yet is it really rational to call on a group like Suez to manage water and sanitation in cities such as Limeira in Brazil for example? Suez did successfully play its role as a pioneer in this case, but is it really the best player to meet new demand? Whatever the answer to that question might be, one can see that there are currently no foreign operators among the fifty or so PPPs that currently exist in Brazil’s water sector. All the “international” players have, in one way or another, sold2 their stakes to national players. At the same time, we have witnessed the gradual emergence of structured services provided by private operators that are 100% Brazilian. Some of them now have about ten years’ experience in medium-sized cities and their results are generally satisfactory.

It is likely that the “misadventures” that marked the first generation of PPPs partly stem from the fact that the services provided by the private sector did not match public sector demand. In their rush to set up concessions that seemed the perfect solution, national public authorities and the donors that supported them forgot that it takes two to talk about public-private partnerships. The “invisible hand” of the market does, of course, dictate that demand creates supply, but Adam Smith did not say that this new supply would come about overnight!

The decision to entrust concessions or affermages to private operators was consequently often taken for lack of another solution: since State-owned companies were unable to provide solutions, one might as well call on private professionals. But the fact that institutional operators are chronically weak does not mean that a private player can do any better. It takes time for the new market of private operators to establish itself and take hold at the regional level. The presence of major international groups is fully justified for a handful of sites where state-of-the-art technologies are required. But these groups have not proved that managing a vast number of medium-sized cities as a whole has brought about real economies of scale. National or regional operators are required to operate services in these small or medium-sized cities. Water services do not simply come down to technical capacity – even if the latter is indispensable. The fact of delegating such a public service to a private actor is already an act that – as far as we defend the concept – legitimately gives rise to debate; delegating the management of this public service to a foreign company also legitimately raises other questions.

Drinking water is an essential public good that carries evident cultural, political and social components that are specific to each society. If such a service is to be well managed, it is necessary to have a deep understanding of the institutional mechanisms and the local way of thinking, to fully integrate into the context. It would consequently appear that one of the major issues over the coming years resides in the creation of a real national market of operators.

This emergence can arise when local entrepreneurs take control of operations implemented by the subsidiaries of major international groups. The loss of interest on the part of groups, Suez in particular, in international operations conducted on all fronts led to a number of spin-offs of overseas subsidiaries which were bought by local players. Elsewhere it is the local partners that were from the outset involved in operations implemented under the leadership of international firms that are taking hold: they are gradually taking control of the joint-ventures via a more or less friendly process. The diversification strategy of national companies that were firmly focused on other core activities (public works, public transport services, agribusinesses) also encourages a private local supply. This is also the case with the consolidation and formalization of small private players that were already present on the more or less informal small-scale water supply market. Indeed, on a vast number of urbanized sites which are not covered by an official “urban” water service, city dwellers are mainly supplied by private initiative.

Most of the small-scale water suppliers are simply carriers and do not have any real resources or capacities to evolve towards a more structured professional activity. But we can also find real entrepreneurs that have gradually managed to build up more elaborate structures and even manage networks, generally without any State aid, sometimes even without any authorization from public authorities. In Paraguay, a pioneer country in this field, a third of domestic connections in the country’s two main cities are provided by several hundred small-scale informal and independent operators, the aguateros. They have provided almost 50 000 connections in Asunción over the past fifteen years, whereas Corposana, the formal operator, only established 62 000 with considerable support from institutional financing. Mozambique provides an interesting example. It is clear that the presence in Maputo of 400 private operators that are too small and too informal alongside an “official” concessionaire that only covers half of the city is not satisfactory. Yet this market is certainly being structured relatively quickly and supply is being consolidated. The biggest operators are reaching a size which leads them to become completely formal and acquire skills and a technical control that turn them into real professionals. A small group of dynamic companies is consequently being formed. They can successfully participate in public-private partnerships that in this case are organized according to best practices and meet the specific requirements of public service management. Some small-scale private service providers (SPSPs) in Mozambique are already using  the experience they have gained in the outskirts of Maputo to bid for concessions for water services in small towns elsewhere in the country.

Towards a regulation and integration of SPSPs?

Similar SPSPs have sprung up in other countries: Cambodia, Vietnam, Mauritania, Uganda. The spontaneous development of informal SPSPs is both attractive and a cause for concern. It is attractive because it is a sign of social and economic dynamism, the symbol of an entrepreneurship that should be encouraged. It is a matter of concern because urban drinking water services are supposed to be a public service that must meet health and technical standards on the one hand, and equity and accessibility standards on the other hand. The anarchic development of small-scale private service providers does not guarantee the quality of a real public service and gives cause for fear of possible Mafia-like abuses.

José Alberto Gulele was a farmer in the outskirts of Maputo. In 2000, when Greater Maputo finally spread out to reach his neighbourhood, he became an SPSP and started to supply drinking water like the 400 or so other SPSPs in the city’s suburbs where the public concessionaire does not have a network.

Today he owns six bore holes, which supply 422 individual connections, and a standpipe. Five employees work full time on water works and meter reading, while his wife deals with monthly billing. He set up his business using his own resources and by reinvesting profits. Mr. Gulele only requested a bank loan once (€10 000 over a year with 27% interest). His business is not official. He is barely tolerated. The company  is typical of Mozambique’s informal sector.

Public authorities face a sensitive issue. It would be absurd to seek to outlaw small-scale private service providers. It is surely preferable for a suburban population to have access to an SPSP service than nothing at all, even if tariffs are high, even if the quality of equipment and water is often questionable. But how can we take advantage of this spontaneous dynamism, without muzzling it with heavy administrative constraints? What is the right way to integrate it?

The challenge lies in creating a new generation of PPPs that meet the requirements of public service without excluding the SPSPs, by regulating them and integrating their services into a coherent system. This is a new issue that States and donors really have to face today. And to address it efficiently, it will certainly require a strong dose of pragmatism. 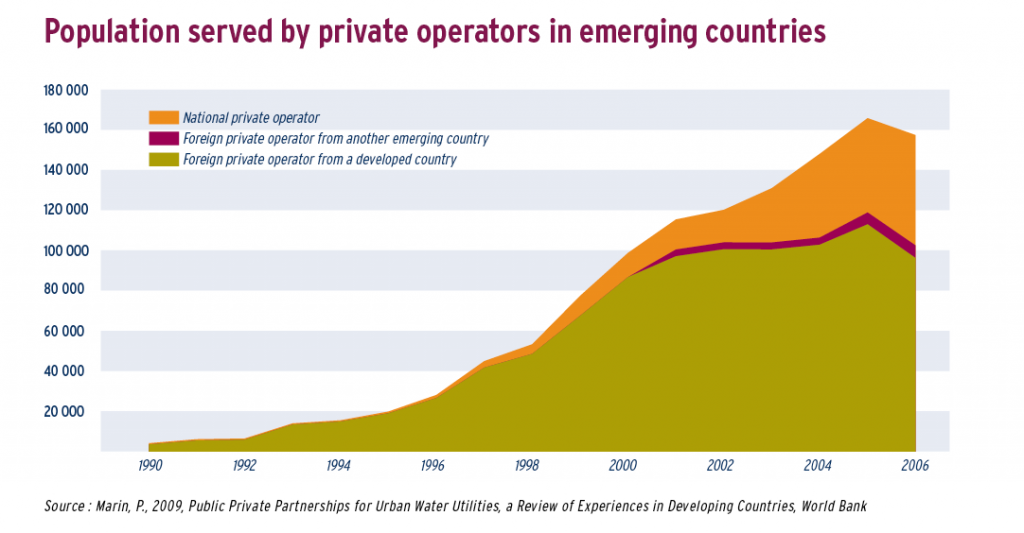 ¹ See also the article by Philippe Marin in the issue of Private Sector and Development.
² Suez in Limeira and Manaus, Aguas de Barcelona in Campo Grande, Aguas de Portugal in Cabo Frio, Earth Tech in Nova Friburgo. Veolia is the only one to have kept a minority stake in Sanepar in Paraná, but it is not the operator.