Private equity is well suited to the continent and is attracting an increasingly diverse spectrum of investors. It is true that its activities remain focused on a few markets, and that concerns remain regarding the reliability of local teams and that exit conditions are inadequate. Yet the process of diversification is under way, the region’s image is improving and the prices are genuinely competitive.

As faith in the Western buyout model faltered during the financial crisis, emerging market private equity cemented its place in investor portfolios and received greater allocations. The riskier prospects of financial engineering, coupled with worsening views of sovereign risk, is prompting many investors to reconsider emerging markets. Sub-Saharan Africa is among the under-penetrated high-growth markets receiving more attention, boasting six of the 20 fastest-growing economies in 2010, with growth rates averaging 5%, compared with 3% in OECD markets (IMF, 2011).

Private equity first took off in South Africa in the 1990s following a wave of multinational divestment and post-apartheid reforms. Over the last two decades the field has grown beyond South Africa, to more than fifty firms across the continent managing billions of dollars.

The scale of private equity in the region remains modest relative to other markets, and its growth slowed during the worst of the recent financial crisis. However, several new vehicles appearing in recent months – from niche strategies in frontier markets to sizeable pools of international capital managed by industry veterans – signal that sub-Saharan Africa is poised for significant growth in the medium term.
This article provides an overview of the sub-Saharan African private equity opportunity in the global context and touches on some unfolding trends in the fundraising and investment environment in the region, concluding with a commentary on the investment outlook.

Sub-Saharan Africa in the Global Context 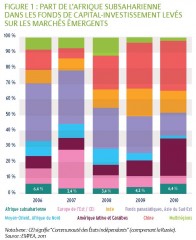 When scaled to gross domestic product (GDP), however, private equity investment activity in sub-Saharan Africa is comparable across BRIC1 markets and greater than other regions such as Latin America and Central and Eastern Europe. Between 2008 and 2010, private equity-backed investment in sub-Saharan African countries accounted for approximately 0.17% of GDP, versus 0.16% for China and 0.10% across Latin America (EMPEA,2011).

Recent developments point to the region’s growing ability to attract capital from an increasingly diverse group of investors and the potential for eclipsing even pre-crisis fund sizes. The USD 900 million raised in June 2011 by pan-African investors Helios Investment Partners – the largest pan-Africa private equity fund ever raised – sources 70% of total commitments from outside the development finance community, traditionally African private equity’s most stalwart investors. In the spring of 2011, global private equity house The Carlyle Group announced the launch of a fund dedicated to sub-Saharan Africa, targeting commitments of at least USD 500 million. South African private equity firms Ethos and Brait, responsible for two of Africa’s largest funds, are expected to raise significant pools of new capital over the next 12 to 18 months. Additionally, a number of more discretely focused and modestly sized funds are currently in the market and lining up commitments.

Deal activity in 2010 nearly matched 2008 levels with 48 transactions, although capital invested fell by 54%, pulled downwards by falling valuations,. the result of both a narrowing gap in expectations between buyers and sellers, and the disappearance of bank financing, which had previously made larger transactions possible. The largest disclosed sub-Saharan African private equity investment in 2010 was USD 151 million, versus USD 175 million in 2008.
A small number of markets continue to draw the bulk of investment activity, with South Africa, Kenya and Nigeria, drawing 27 of 48 deals in 2010. However, investments are becoming more geographically dispersed. South Africa’s share fell from 56% of deals in 2008 to 21% in 2010 (EMPEA, 2011). In the last 18 months, private equity investors have backed companies in Benin, Congo, Ghana, Liberia and Madagascar and Tanzania.

The private equity model is particularly well matched to the African context, appealing to an increasingly international and diverse class of investors. Equity markets offer an alternative to institutions who might otherwise prefer to invest directly in companies but are deterred by market opacity. Most African exchanges are concentrated in a few companies and sectors, e.g., financials and natural resources, with minimal exposure to the growing middle class, a fundamental growth driver for the region that forms the core of most private equity fund strategies.

Outlook and challenge for Investors in sub-Saharan Africa 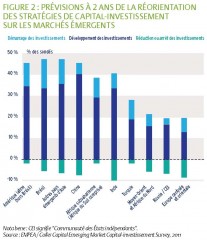 EMPEA’s most recent research on Limited Partner (LP)5 appetite gives evidence of the region’s brand improvement, with 67% of LPs surveyed viewing Africa as attractive in 2011 and 39% planning to begin or expand their investments in sub-Saharan African funds (Figure 2) – Coller Capital and EMPEA, 2011.
Concerns – chiefly about the depth of the fund manager pool – remain, as do residual concerns related to political risk. Investors without exposure to the region indicated in both the 2010 and 2011 EMPEA/Coller Surveys that a shortage of experienced fund managers inhibited their willingness to invest in Africa (Table 1). Yet, over the last decade, the number of fund managers active in Africa has grown fivefold.

Fund managers cite the human capital deficit – professionals to develop, screen, structure and execute deals – as limiting their ability to exploit opportunities. The pool of skilled management within portfolio companies, particularly CFOs, is also shallow. Yet another constraint facing fund managers is the absence of a robust intermediary network – advisors, bankers, brokers and data providers – making sourcing and evaluating opportunities labour-intensive.  Because most deal flow is sourced on a proprietary basis, management talent is all the more important. Encouragingly, the financial crisis may result in many Western-trained African professionals returning home to fill this void.

An exit environment is another hurdle to attracting more capital. Apart from a small number of private equity-backed public listings, primarily in South Africa, trade sales accounted for the bulk of exits in 2009 and 2010. Exit activity remains sluggish in 2011, but signs of an improving exit environment are emerging. Recent examples include the July 2011 listing of Ethos-backed sporting goods retailer Holdsport on the Johannesburg Stock Exchange, and the sale of Aureos Capital’s stake in Nigerian biscuit manufacturer Deli Foods to South Africa’s Tiger Brands. Secondary sales remain rare due to the small field of assets ripe for transfer between financial sponsors.
African fund managers hope for a larger and more diverse ecosystem coupled with a deeper pool of mature private equity-backed companies, translating into more options for exiting, including secondary transactions.

One positive by-product of Africa’s thin domestic private equity market, whether due to shallow talent pools or challenging exit environments, is more competitive pricing. Assets in sub-Saharan Africa – with entry multiples in the high single digits compared with double-digit multiples in markets such as China and Brazil – are considered bargains by many investors. Prices are expected to rise, yet most fund managers believe that good deals abound.

According to the 2011 EMPEA/Coller Survey, investors with exposure to assets in sub-Saharan Africa expect higher returns than do LPs without exposure, suggesting confidence in the abilities of experienced fund managers to anticipate and manage the risks of investing in these comparatively nascent private equity markets. While returns data on the whole of sub-Saharan Africa is not available, a 2011 study by RisCura and the South African Venture Capital Association showed that South African private equity outperformed UK and US private equity funds over three-, ten-, and five- year horizons, with South African funds delivering pooled net internal rates of return of more than 20% over a ten-year period, versus roughly 13% in the UK and 8% in the US (RisCura and SAVCA, 2011). Two of the most active investors in the region – the International Finance Corporation (IFC) and the UK’s CDC Group – report that their African funds have outperformed relative to emerging markets benchmarks such as the MSCI Emerging Markets Index6 (CDC), or to their emerging markets private equity portfolios overall (IFC).

Private equity in sub-Saharan Africa is not new, but the region is certainly under-penetrated. In fact, the nascence of African markets may mean a greater upside for investors. Many African economies are less correlated to the volatility wrought by debt in developed markets. Much of the forecasted growth will come from domestic drivers such as consumption and investment in energy. Private equity offers tremendous additionality to capital-starved companies at saner prices than are commanded elsewhere in emerging markets. While the data is not present to enable definitive claims about performance prospects, optimism surrounding the trajectory for private equity is by no means misplaced.

¹ BRIC refers to the group of Brazil, Russia, India and China, which are all deemed to be at a similar stage of newly advanced economic development.
² Emerging Capital Partners (ECP) is an international private equity firm focused on investing across the African continent. It is the first private equity group to raise over USD 1.8 billion to invest exclusively in African companies.
³ Kingdom Zephyr Africa Management (KZAM) is a joint venture between Zephyr Management, L.P., a New York-based asset management firm, and Kingdom Holding Company, an investment vehicle headed by HRH Prince Alwaleed bin Talal Bin Abdulaziz Al Saud of Saudi Arabia. Both Zephyr and Kingdom Holding have been investing in African private equity for over 15 years.
4 See the article by Kiriga Kunyiha and Davinder Sikand, p.10 in this issue of Private Sector & Development.
5 Limited Partner is one of the co-owners of a business organized as limited partnership who does not participate in the management of the firm.
6 An index created by Morgan Stanley Capital International (MSCI) that is designed to measure equity market performance in global emerging markets. The MSCI Emerging Markets Index is a free float-adjusted market capitalization index that is designed to measure equity market performance of emerging markets. The MSCI EM Index consists of the following 21 emerging market country indices: Brazil, Chile, China, Colombia, Czech Republic, Egypt, Hungary, India, Indonesia, Korea, Malaysia, Mexico, Morocco, Peru, Philippines, Poland, Russia, South Africa, Taiwan, Thailand, and Turkey, as of May 30, 2011.

Living with an investment fund – the company perspective

Private equity and TA, a winning combination for SMEs