The volatility of agricultural prices undermines food security in developing countries. It is a well-known issue which calls for proactive, consistent agricultural policies that address the various risks facing producers and consumers – policies that include an analysis of the risks, strengthen agricultural sectors, encourage the formation of producer groups, build up emergency contingency stocks, collect and analyse data, and provide access to various types of insurance and risk cover.

The recent rises in food prices (2008 and 2010) have had tragic consequences for millions of people. As a result, food security has become a major mobilising issue, albeit not a new one: the proportion of undernourished people in developing countries stopped falling in the mid-1990s. Today, approximately one billion people are suffering from malnutrition (Vindel and Jacquet, 2011).

Price volatility is not a new problem either: agricultural commodity prices have been more variable than the prices of manufactured products since the beginning of the 18th century. The degree of volatility has not increased noticeably since then (Jacks, O’Rourke and Williamson, 2009). Price volatility, a characteristic of agricultural markets, poses a risk to producers – by depriving them of the foreknowledge they need of their future income in order to decide whether or not to increase production – and to consumers. It also weakens public finances. Industrial countries have often implemented proactive agricultural policies as an answer to price instability. Public policies have helped to stabilise prices or farmers’ income, giving them the foreknowledge they need to plan ahead. And, since the second half of the 19th century, agricultural markets have developed financial instruments to provide cover for price risks. Following the serious crises of recent years, the French presidency of the G20 has made the volatility of agricultural prices and food security one of the group’s priorities.

What we know about price volatility 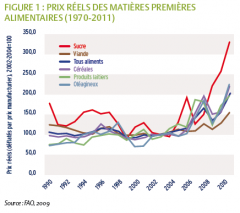 The volatility of agricultural prices is naturally high. Supply and demand of agricultural products are not “elastic” in the short term: they do not alter much in response to price fluctuations. This means that any change in the quantities produced or demanded will lead to a significant variation in the price. In other words, only a big price increase will bring demand down in line with lower production, for instance. In addition, the supply-side response is always delayed: when prices rise, farmers plan to increase production, but the increased supply will not arrive on the market until after the next harvest. In the past 25 years, food prices have risen at an unprecedented rate in real terms compared with the prices of manufactured goods (Figure 1).

Price volatility, incidentally positively correlated with price levels (Sarris, 2009), has risen, particularly since 2006. In addition to the fundamental causes – demographic and economic growth, dietary changes, climate disasters, higher energy prices, competition from biofuel crops and very low food stocks – speculation on agricultural markets has possibly fuelled price volatility by spreading a sense of panic. Nevertheless, speculation is not likely to be the sole cause of the increase in volatility: the two types of causal factors interact. Speculation is a signal that draws attention to fundamental issues that have been ignored for too long.

In fact, the long-term view does not give credence to the idea that there has been a historical trend towards increased volatility. Smoothed over ten years, it rather appears to show a slightly downward curve, despite the very noticeable rise since 2006. Yet, a number of elements seem to indicate that this phase of rising volatility and prices could continue (see FAO forecasts), sustained on the demand side by demographic pressure and economic growth in developing countries, and on the supply side by environmental pressures, climate change and energy costs. The capacity of the supply side to meet demand in a particular place at a particular time remains very uncertain, even though the long-term studies available do not show any problems meeting aggregate global food demand.

What can be done?

The volatility of agricultural prices is not the only problem facing producers and consumers in developing countries. There are plenty of other difficulties: insufficient transport, communication and storage infrastructure; access to finance; lack of training; crop vulnerability to disease; access to water, etc. We therefore need to develop an integrated approach that covers the entire value chain and focuses on agricultural development and food security. This is why the G20 2011, under its French presidency, insisted on providing support for drawing up coherent agricultural policies that clearly pursue the aim of improving food security, and on the need to include in these policies a risk analysis and management component that addresses all the risks involved, including price volatility. NEPAD validated this approach, submitting an official request to the G20 in September 2011 to help its member countries supplement the efforts being made to draw up agricultural policies within the framework of the CAADP programme, by including provisions for risk analysis and management.1

It is time to revive the idea of proactive agricultural policies. Agricultural development will not happen spontaneously without them. The example of industrial countries demonstrates the importance of proactive policies. In the past, such policies have combined a number of different market intervention mechanisms: buffer stocks, fiscal and commercial measures, and transfer or compensation mechanisms designed to assist individuals or countries in times of crisis. The European Union put in place market regulation instruments as part of the Lomé Convention (Stabex and Sysmin2) and the IMF set up facilities for emergency finance. In developing countries, policies should enable producers to calculate revenues in advance, providing enough incentive to boost production, and should include social security safety nets to protect consumers and give the most vulnerable sections of society the means to feed themselves.

The build-up of stocks should be encouraged along the entire value chain by means, for example, of public purchasing, whilst ensuring that the use of these stocks does not interfere with decisions in the private sector by sending out signals that create uncertainty. It is important, however, not to repeat the mistakes made by agricultural policies in industrial countries and international mechanisms. Stabilisation processes have in fact suffered from a number of shortcomings: confusion between reducing price variability and arbitrary price fixing, which causes distortions in production and consumption that are untenable in the long run; and ignorance of market trends at prohibitive costs. Price shocks can last years (Cashin and McDermott, 2001),3 which quickly makes any price-fixing mechanism very costly. In addition, the conditions that are often stipulated by compensation mechanisms, for example STABEX (Collier et al, 1998), delay their implementation significantly. As a result, instead of acting as a counter-cyclical buffer, the mechanism ends up having a pro-cyclical effect. Building up and managing buffer stocks is also particularly costly, both in terms of storage infrastructure and conserving the quality of the stored products. Finally, poor governance has led recipient states to seize funds intended both for transfers to farmers and for restocking the mechanism.

Agricultural policies can also make use of market mechanisms. Index-linked insurance in particular allows a lump-sum approach, rather than one based on a precise damage assessment that is open to dispute. But the insurance culture is insufficiently developed. In addition, insurance premiums are often too high for farmers and need to be subsidised. The commodity markets also offer various instruments for hedging against risks, both for consumers (protection against high prices) and for producers (protection against low prices). But these instruments are hardly adequate for developing countries. For instance, there can be a noticeable difference between international prices and domestic prices4 because of trade restrictions, taxes, subsidies or price controls, a lack of infrastructure, the high cost of domestic transactions or exchange rate fluctuations. The volatility of international prices is not the only source of price shocks for developing countries. The preliminary report by multilateral institutions produced for the G20 (FAO et al, 2011) suggests that efforts to improve food security should be based on a sufficiently extensive database on the situation in the different countries. Finally, risk management instruments need to be practically custom-made.

These costly instruments require training and expertise and their benefits do not become visible until agricultural sectors are sufficiently well organised and function correctly. In some cases, up to 50% of production can be lost because of inefficiencies throughout the entire value chain. Risk management needs to be integrated into an approach focused on developing agricultural sectors, from field to commodity utilisation. The stakeholders involved also need to be taught to fulfil their obligations. It is gene-rally difficult to get producers to adhere to a domestic price ceiling when international prices are higher, or to convince consumers to agree to a minimum price in the opposite case. It is one of the obstacles preventing the development of contract farming, which can give producers – and consumers – the neces-sary advance price information for one or more crop years.

In 2011 for the first time, the G20 made food security one of the priorities for international action and launched a number of lines of action ranging from emergency stocks to setting up a coordinated rapid-response forum for crisis situations, and including the promotion of agricultural investment and productivity. In terms of managing price volatility, the G20 invited donors to set up a joint information-sharing, risk analysis and management mechanism, for which Agence française de développement has taken the initiative, in order to meet the request for assistance from developing countries, particularly those in NEPAD, and, if necessary, to instigate new debates on the key issues identified. The G20 has also supported the setting up of a public-private platform for food security. The agricultural sector is in fact the most important private sector in developing countries. One of the roles of agricultural policies is therefore to act as a catalyst to mobilise private economic players in support of the food security objective, and to reinvent an effective, egalitarian public-private partnership. The G20 is also appealing to donors to take stock of their responsibilities in terms of developing flexible financing instruments that take greater account of the risks – following the example of the highly concessional counter-cyclical loan5 set up by  Agence française de développement. It has set the international community on a promising path, which future G20 summits will need to take forward.

¹ A number of examples demonstrate the value of a risk-based approach. For example, the price-smoothing fund for cotton prices in Burkina Faso that was set up with the assistance of AFD, and the mechanism set up in Argentina in 2010 to assist cotton producers.
² The compensatory finance scheme for stabilising export earnings from agricultural products (STABEX) compensated losses affecting a large number of agricultural products, particularly those resulting from price fluctuations on global markets. Loans from the SYSMIN fund were designed to reduce a country’s dependence on the exploitation of its mineral resources.
³ Prices are in fact correlated between one year and the next, particularly as a result of storage dynamics. Building up stocks supports the current price and smoothes price shocks over several years.
4 This difference between local and international risks is called “basis risk”. The higher it is, the less effective international risk coverage instruments will be.
5 The highly concessional counter-cyclical loan is designed to enable beneficiary countries to adapt their debt repayments in the event of exogenous shocks on their economy involving a significant reduction in their export income.