In many cities of the developing countries, the informal sector plays an important role in managing municipal solid waste.  The informal recovery of recyclables from the solid waste system reduces overall solid waste management costs for municipalities. Millions of Euros are saved annually in the process.  Apart from this, informal sector waste management activities  also helps municipalities achieve recycling objectives and reduce use of precious landfill space.

Waste management systems in the cities of many developing countries could not be managed without the informal sector: waste pickers, scrap collectors, traders and recyclers. The International Labour Organisation (ILO) defines informal sector waste workers as individuals or small and micro-enterprises that intervene in waste management without being registered and without being formally charged with providing waste management services. This sector is often not officially recognised and acknowledged, yet its members contribute significantly to the waste management of cities, by collecting, sorting, processing, storing and trading waste materials in the recycling value chain. Many more tonnes of recovered materials come via informal channels in the cities than via formal channels (Table 1). In most developing countries, 15-20%2 of the waste generated is managed by the informal sector, providing financial and environmental benefits to municipalities.

In most developing countries, the informal recycling sector is structured like a pyramid. At the bottom of the waste trade pyramid are the waste pickers who engage in the free collection of waste from municipal garbage bins, streets and dumps. Above them are the itinerant scrap buyers who purchase small quantities of waste (plastic, paper, glass, metals, etc.) from households. In several countries, households also sell their recyclable waste to itinerant buyers in street shops. Between the waste collectors and the reprocessors are various levels of traders, including retailers, stockists and wholesalers, many of whom are not registered as businesses. The trade gets more specialised as it moves up the pyramid. At every successive level, waste is sorted more specifically; the finer the segregation, the more value is added. Where city waste collection systems are efficient, some of the players may be missing or combined. Materials recovered by the informal valorisation sector are sold into the industrial value chain. In a recent development, waste picker cooperatives have been formed by informal sector workers in many countries with the help of non government organisation and donor agencies. These workers undertake some formal work under contract to a municipal authority, while also being involved in informal recycling, thus in this respect, making their role semi-formal.

Many studies indicate that the informal solid waste management sector is more active and effective in recovering and valorising resources than the formal one in low- and middle-income countries. The reasons for this are as follows: first, the informal sector usually works in the recovery and recycling of valuable materials, while the formal sector focuses on collection and disposal; second, the informal sector achieves higher recycling rates. Although operational costs are often higher than in the formal sector, the high revenues from materials result in a much lower cost per tonne, in most cases a net benefit. Informal valorisation businesses only extract, process, and sell those materials that have a high intrinsic value and on which they can make a profit. All informal valorisation activities along the entire value chain are profitable. The informal sectors in Cluj (Romania), Lima (Peru), Lusaka (Zambia), Pune (India), Quezon City (the Philippines) and Cairo (Egypt) together make a net profit of about EUR 130 million (CWG-GIZ, 2011). The large profit is able to sustain or add valuable income to sustaining about 73,000 informal sector workers in these cities. 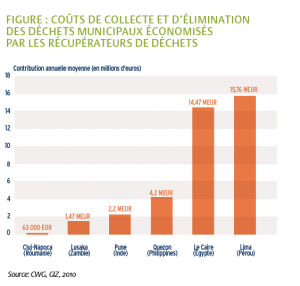 The informal recovery of recyclables from the solid waste system reduces overall solid waste management costs for municipalities (Figure 1). If material is recovered through door-to-door collection by the informal sector, this material no longer needs to be collected, so all expenses – collection, transport and disposal – are reduced according to the amount that is recovered. The savings on transport depend on the point at which the material is removed from the waste stream for recycling. If material is recovered at the disposal site, transport costs are not reduced, but disposal costs are reduced. Millions of Euros are saved in the process. For example, Delhi (India) saves around EUR 6.7-7.5 million annually. A study conducted in six cities of developing and emerging markets suggests that most of the avoided costs are for collection. The average avoided costs per worker are EUR 571, which in many cities is more than that same worker earns in a year (CWG-GIZ, 2010).

By engaging in recycling activities, the informal sector also creates environmental benefits for the municipal authorities, helping them to reach recycling targets and save precious landfill space. It also reduces the extraction of raw materials and returns secondary raw materials to the production cycle, resulting in less energy being used for recycling processes than for production processes with primary raw materials. Moreover, informal sector recovery scores considerably better than formal recovery in terms of reduced fossil energy use. This is because many informal activities rely on human or animal muscle traction, rather than on motorised transport.

A source of livelihood for millions of people

The informal recycling sector provides a livelihood to millions of people in developing countries, who survive on informal waste picking and recycling (Table 2). It is estimated that nearly 15 million people are engaged in waste management activities in the informal sector. In many cities, the informal waste sector provides more livelihoods than the formal waste sector. Waste pickers’ earnings also vary widely among regions, in terms of the type of work they do, and between women and men. Although waste picking is the lowest paid part of the recycling chain in many places, these workers often earn more than the minimum wage. In Brazil, for example, data collected shows that 34% of waste pickers earn 1 to 1.5 times the minimum wage, and 54% of them earn 1.5 to 4 times the minimum wage.

However, work in the informal recycling sector is usually insecure, and carried out under appalling health and occupational safety conditions, sometimes inhuman. Waste pickers face great risks of injury, especially those who work at open dumps: they may be run over by trucks or become the victims of surface subsidence, landfill slides and fires. They are also exposed to great quantities of toxic fumes at the disposal site. It is generally accepted that morbidity among waste pickers is higher than among formal waste collectors.

Mobilising and formalising the informal sector

Attitudes of municipal authorities towards the informal sector differ from place to place: in some places there is hostility, in others indifference, and in some places they are regarded as a useful part of the waste management system and are given the opportunity to enhance their livelihoods. The role of municipalities is critical to mobilising the informal sector and organising the informal valorisation sector.
The first way to upgrade the informal sector would be to integrate waste pickers into directly collecting waste at source, with a right over recyclables and a guarantee of regular access to waste. In 2006, the Pune Municipality granted waste pickers the right to collect waste and a service fee from households (Box 1). In Bogota (Colombia), the Appellate Court struck down the exclusive right over waste to a municipal waste contractor and restored the right over waste to the street waste pickers.

Solid Waste Collection and Handling, or officially, SWaCH Cooperative, is India’s first wholly owned cooperative of self-employed waste pickers/waste collectors and other urban poor. It is an autonomous enterprise that provides front-end waste management services to the citizens of Pune. SWaCH is authorised by the Pune Municipal Corporation (PMC) to provide door-to-door waste collection and other allied waste management services. The scope of SWaCH includes collection, resource recovery, trade and waste processing. Currently, through its 1,867 members, it provides services to the population of over 1.5 million people of Pune. SWaCH bridges the garbage gap between people’s doors and the PMC collection points. It offers total solutions for wet garbage and dry garbage, while enabling the waste pickers and collectors to keep their livelihoods and get trained to carry out their work professionally and in an occupationally safer way. The integration of the waste pickers through SWaCH has helped to reduce waste disposal by more than 20%. For the PMC, the cost of engaging with the informal sector is much cheaper than engaging with private sector.

Mobilising the informal sector entails municipalities establishing direct contractual or covenant relations with informal sector organisations. But to facilitate this, the informal sector needs to organise itself into cooperatives or other legal or semi-legal structures. For efficient waste management, it is more appropriate and economical to use the existing structures of the informal sector or to modernise it. For example, Brazilian municipalities partner with waste picker cooperatives, giving them the right to receive recyclables collected by the municipality and to rent recycling centres. In Bangladesh, Waste Concern3 and a few other NGOs train waste pickers in organic waste recycling (composting). The pickers sell the compost to a large fertilizer company.

Informal workers have limited general business knowledge, and are often socially disadvantaged. For this reason, policy changes need to consider the specific circumstances of the informal sector. Municipalities could provide waste pickers with identity cards and health insurance schemes; they could also support them in establishing cooperatives or SMEs, and provide them with training.

Partnering with the private sector

In Coimbatore, waste is collected door-to-door every day by the local authority, whereas transport, composting, processing and landfill is the responsibility of a private company called UPIL for a period of 25 years. Its revenues come not only from landfill site fees, but also from the sale of the compost and recyclable materials collected. Since then in Coimbatore, waste pickers are no longer allowed access to landfill sites and the door-to-door collection system is starting to squeeze out the informal waste picking from public spaces.

In this city, a third system also exists, run by the Indian Tobacco Company (ITC), a large industrial conglomerate that operates three paper mills in India. To feed its paper mills, in 2010, ITC introduced a new system for collecting waste paper directly from more than 20,000 households. Because it is positioned well upstream in the process, this system also cuts off the source of supply for waste pickers and scrap dealers.

This example shows that waste is perceived as much as a recoverable resource as “just rubbish”. The rivalries between these systems are more than straightforward economic competition. They raise questions concerning the distribution of resources and the definition of rights of ownership to the materials, to avoid them being monopolised by a single operator. Here informal sector waste pickers are not only displaced but also overall recycling and recovery is anticipated to be much lower than what it could have been with the integration of waste pickers in the formal system. (AFD, 2010)

Regularising and integrating informal recovery into the overall solid waste system could enhance recyclable recovery rates and reduce overall solid waste management costs. Generally, policies that facilitate the integration of the informal sector will result in an increase in the rate of material recovery. Consequently, disposal rates will drop, allowing for savings in transportation and landfill operations. Many forms of waste valorisation are found in different combinations: personal or commercial reuse, reuse with repair, recycling, and composting. In all these scenarios, municipalities make a net gain and can therefore reach higher recycling and landfill diversion rates quicker than with their conventional systems.

Assessing the impacts of new IPPs at country level? Case study on Kenya

What role for the private sector in developing a digital Africa?