Each year, around 500 billion plastic bottles are discarded globally. Incinerating them or sending them to landfill increases the levels of pollution generated by the plastics industry. PerPETual Global recycles plastic bottles to produce feedstock of the same quality as petrochemical feedstock, thereby delivering a sustainable alternative while making use of something that is all too often still considered to be waste.

Global consumption of plastics and polymers is likely to grow by an average of 5% per year, reaching 227 million tonnes in 2015. Among the vast family of plastics, it is PET  (bottle grade) which is expected to grow the fastest (11% on average per year). In India, PET bottles have inundated the market in recent years, with annual growth rates in consumption exceeding 20%. Plastic consumption per head of population in India is 5 kg, representing a total volume of 9 million tonnes in 2010, compared with the global average of 26 kg. Plastic consumption in India is forecast to reach 18.9 million tonnes in 2015, half of it in the form of packaging and bottles (Dolat Capital, 2011). The bottle segment consumed around 350,000 tonnes of bottle resin in 2011, compared with 1.1 million tonnes in Western Europe, for example. These figures underline the key role that recycling needs to play to accompany the growth in the plastics industry, and the challenge involved in putting in place innovative technology to deliver sustainable, high-quality solutions for this sector. 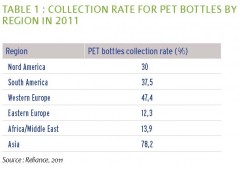 The problem with what to do with used bottles is particularly acute in a country where the collection rate for used PET bottles (75%) is well above the global average of around 36% (see table). In the absence of any government involvement to structure and regulate waste management, the latter has effectively become the prerogative of the informal sector. India’s recycling industry employs more than a million people in various activities, from waste collection, sorting and re-use to more organised door-to-door collection, composting and recovery of materials.

According to the Central Institute of Plastics Engineering and Technology, there are an estimated 3500 formal recycling units in India and 4000 informal units, employing a total of 1.6 million people directly and indirectly. They recycle 3.6 million tonnes of plastic each year. Small-scale waste collectors (“rag pickers”) collect used bottles from households or directly from open landfill and bring them to a shopkeeper each day. The shopkeeper sorts them into clear and mixed bottles and then sells them to a wholesaler. The wholesaler either flakes the bottles and sells the flakes on the market, or crushes the bottles into bales for resale. There are an estimated 200 wholesalers of this type throughout India. As in other parts of the world, the vast majority of the plastic flakes (95%) are recycled to produce polyester fibre, which is used as a filler in textile applications with low added value,  while what is left is used to make straps, additives and thermosetting resins.

PerPETual Global was established in 2006 on the initiative of the environmental investment fund specialist Aloe Private Equity. Its objective was to acquire and exploit the patents for the ReNEW™ technology, which had been developed and tested in a pilot plant by an Australian inventor. This technology – the only one of its kind in the world – makes it possible to replace all or part of the polluting petrochemical feedstock (PTA and MEG) traditionally used in the manufacture of PET with materials from recycled clear and coloured bottles. In 2007, PerPETual acquired a factory in Nashik in India in which to install the ReNEW™ technology. The factory produced textile fibres from conventional PET and had a capacity of 30,000 tonnes.

After spending a few years perfecting the technology and adapting it to large-scale production, the company modified the factory’s production cycle. Today, thanks to the ReNEW™ technology, it is able to replace 100% of the conventional primary materials (PTA and MEG) used to manufacture PET with chemical components (esters) from recycled bottles. The factory processes 20 million used bottles per month.

PerPETual Global is involved at several stages of the value chain: it produces primary materials (recycled esters) and also manufactures the finished intermediate products: textile fibres. This dual role was necessary to achieve market acceptance for the new technology. In fact, customers buy fibres from the Nashik factory (now renamed Polygenta) based on quality and price. The fact that they are recycled is irrelevant. These purchasing criteria demonstrate the economic and technical viability of the ReNEW™ technology. In a second phase, the company will develop factories that will produce only recycled esters, which will be sold directly to manufacturers of textile fibres or plastic bottles and packaging film – a market that is currently worth USD 80 billion worldwide and is growing by 5% to 6% each year.

With the traditional, mechanical methods of recycling PET bottles, it is difficult to separate the contaminants, especially dyes, from the plastic efficiently. Despite the considerable amount of energy and water used in conventional processes, the inherent limitations of these processes restrict companies to producing recycled products of low quality. By contrast, the ReNEW™ chemical procedure depolymerises the PET plastic waste (polyester) back into its original components (esters) in a process that also releases all the contaminants contained in the plastic. The contaminants are then removed in a three-stage filtration process. The recycled esters can be used instead of, or alongside PTA and MEG (see diagram) to produce PET in a way that is both economical and eco-friendly. This technology has the capacity to recycle all types of plastic bottle, including coloured bottles, which are nearly 30% cheaper than clear bottles because of the fact that mechanical recycling systems cannot remove the dyes effectively. This ability to use all the available raw materials is vital in a market like the PET industry which operates with very narrow margins. A tonne of PTA/MEG, needed to produce a tonne of PET, costs around USD 1500. 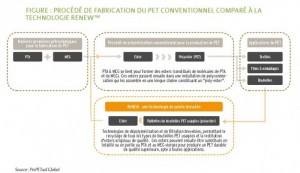 The equivalent amount of recycled esters costs USD 1070. ReNEW™ recycling units are modular and standardised, which means they can be used in existing PET factories to reduce dependence on traditional petrochemical feedstock. In view of the fact that it takes 0.61 tonnes of crude oil to produce a tonne of virgin PET, and that the production process emits three tonnes of carbon dioxide, every tonne produced by PerPETual Global reduces carbon dioxide emissions by two tonnes.

Today, the Polygenta factory works with around 30 suppliers of used bottle bales or flakes, all of them in the formal sector and located in the west of India where the company is based. These wholesalers buy PET bottles from small shopkeepers in town, who in turn buy them from the rag pickers. The development of operations at the Polygenta factory has led to an increase in demand for used bottles and, as a result, to a rise in their value. This appreciation has benefited the entire supply chain. The average purchase price paid to small-scale local waste collectors for used plastic bottles has gone up from 10 rupees to 25 rupees per kilo in the space of two years, representing an increase in revenue of over 100% for the workers at the bottom of the pyramid.

In order to optimise its sourcing operations, PerPETual Global has had to improve the way used bottles are collected by developing long-term contracts with the wholesalers – in place of the one-off purchases which are currently the norm for most Indian recycling operations. Long-term contracts guarantee demand, which enables small waste collectors, who acquire greater visibility as a result, to manage their working capital better and to collect bottles over several days before having to resell them to the wholesalers. The company is also considering ways of supplying balers (machines for making bottle bales) to the shopkeepers in order to optimise the flow of bottles and enable the collectors to send a greater number of bottles while reducing the volume. Experience has shown that the suppliers are open to change and to the idea of forging long-term relationships that will benefit the entire supply chain. Since the small-scale collectors do not deal directly with the Polygenta factory, the company recently initiated a dialogue with Stree Mukti Sanghatna-Mumbai, an Indian NGO that specialises in improving working conditions for rag pickers. The aim is to ensure that those at the start of the supply chain benefit as much as possible from the improvements to the value chain.

Because sourcing is vital, PerPETual is exploring all possible ways of improving the supply chain. The company is currently talking to big international waste-collection companies and to Indian bottle manufacturers to divert used PET bottles away from waste flows. This dialogue will facilitate the establishment of future regulations. In fact, the Indian government announced in February 2011 that there were plans to regulate the management of plastic waste and that it would be introducing the principle of producer responsibility for waste collection that exists in Europe. This would include collection centres, to be set up by the state and local governments and financed by the producers. This means that local authorities will have to appoint agencies, associations and groups (including waste collectors) to run the system. To establish this new system it will be necessary to raise awareness of waste collection issues among the local populations. PerPETual Global is playing its part by launching a number of information campaigns in India (bottle collections at the Mumbai 2012 marathon, visits to schools, etc.).

In addition to the positive effects on the supply chain, the factory in Nashik has also had an impact on the local economy. It has helped improve local infrastructure (construction of a well at the factory entrance), it offers better employment conditions to its salaried workers and new opportunities for local businesses and suppliers (directly, by sourcing materials locally, and indirectly by injecting life into the local economy – including the appearance of a restaurant/café on the outskirts of the factory). Moreover, the Polygenta factory uses a highly specialised technology and had to work closely with its equipment suppliers to develop exacting standards and quality control processes (in particular regarding the quality of metal used for the machines and the quality of welded joints).

Thanks to successful technology transfer, PerPETual Global is one of the most advanced companies in the world for high value-added PET recycling, and its chemical recycling process is commercially competitive. Having demonstrated the applicability of its product through the integrated Nashik factory, PerPETual will now concentrate on producing primary materials – recycled esters – and position itself as a supplier to PET industries worldwide: for textile and plastic packaging and bottle applications. PerPETual plans to open several factories in the next three years in India, Singapore, Oman, and South America, where the company has identified partners for waste collection and for setting up ReNEW™ units.