Housing the world: leveraging private-sector resources for the public good

By 2030, around 3 billion people in the developing world will need housing. That means 565 million new units, adding to the current gap of more than 400 million homes. Building these will provide much needed employment in the construction industry and the supply of materials, fixtures and services. Challenges both on the supply and demand sides, common to most regions, must be overcome, however, not least in making finance available to those most in need.

According to UN-Habitat, more than half today’s world population lives in towns and cities, and, in the next 40 years, urban environments are likely to absorb most of the projected population growth of 2.3 billion people (United Nations, 2011), as well as drawing in others from rural areas. By 2050, 6.3 billion people will live in towns and cities, almost 70% of the world’s population. And as population growth is largely happening in less developed regions, rapid urban growth will be concentrated in the developing world. This urban explosion has led to burgeoning informal settlements. The Millennium Development Goal of ‘significantly improving the lives of at least 100 million slum dwellers by 2020′ was achieved by 2012 and 200 million slum dwellers now have access to improved drinking water, sanitation facilities, and durable, less crowded housing. But despite the proportion of the population living in slums falling from 39% to 33%, the overall number of people living in informal settlements has risen by 100 million since 2000, to 863 million, equivalent to about a third of the developing world’s urban population. While informal housing can be regarded as an inevitable and necessary part of growing cities, offering a low-cost stepping-stone to better lives for migrants, efforts should be made to smooth the evolution of slum housing into mainstream city accommodation. 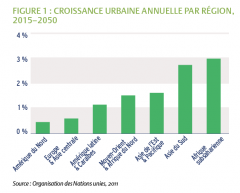 The urgency and magnitude of the need for affordable housing in coming decades is clear. To meet the challenge of accelerated urbanisation, new solutions are required as the public sector alone will be unable to build sufficient housing or provide the necessary infrastructure (Figure 1). UN-Habitat calculates that, by 2030, around 3 billion people, about 40% of the world’s population, will need new housing together with basic infrastructure and services. Assuming an average household size of five, 565 million new units will be required, adding to the current gap of more than 400 million units.

The urban revolution offers opportunities to emerging economies as well-planned, densely-populated cities are places of ideas, diversity and innovation where so called network benefits can arise from having many activities and people in one place. Beyond meeting the need for shelter, providing housing to a growing urban population is part of the broader benefits which cities offer in terms of social inclusion, access to services and welfare.
There are multiple economic benefits, too. McKinsey values the opportunity of filling the housing shortage in 16 of the largest emerging markets at USD 600 billion (McKinsey, 2012). In India alone, the impact of building two million affordable homes could create 3 million construction jobs, 24 million in linked industries and services, and result in a 2% growth in gross domestic product, around USD 25 billion. There would also be a USD 17 billion rise in the demand for credit, a 16 million tonnes demand for cement while the need for steel would rise by 6 million tonnes. Demand for painting, plumbing, electrical appliances and other household goods would also rise.
Environmental gains are also available. The Intergovernmental Panel on Climate Change (IPCC) calculates buildings account for 40% of global energy usage, but this can be improved at no additional cost. According to IPCC, 29% of the housing sector’s energy consumption could be reduced by 2020, while retrofits, primarily improved insulation and updated, energy-efficient heating and cooling systems, could save up to 90% of a building’s thermal-energy use (International Energy Agency , 2012). The carbon footprint of house building could also be reduced by using smart technologies, for example, those that reduce the use of cement, which currently produces up to 5% of global carbon dioxide emissions (Rubenstein, M., 2012). Understanding amongst investors, developers and policy makers that green buildings can reduce costs, boost efficiency, lower footprints and generate local innovation is growing. The challenge, however, is to apply green-building technologies on a mass scale.

Common constraints for the housing sector

A common set of obstacles prevents the global urban boom from unleashing these opportunities. Although there are divergences in scale, the constraints on building more affordable housing are remarkably similar across countries and regions. They can be broadly categorised as impediments that limit demand, and ones that curtail the ability of developers to produce housing in sufficient numbers and priced for the mass market. Demand is almost limitless – those without housing need shelter and those with it want more room or improved conditions. However, turning this need or desire into effective demand is a challenge, with impediments typically related to finance. Housing finance has very low penetration in emerging economies where typically less than 5%  of the adult population has a loan to purchase 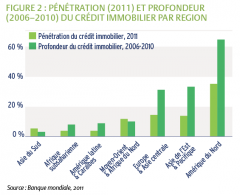 housing – it is 25–35% in the US, Canada and Western Europe. This is despite the fact that in some markets housing finance has been taken up by the microfinance sector, which is well placed to serve lower-level market segments but is limited in outreach. The deep mismatch between demand for housing and the supply of investment is starkest in Sub-Saharan Africa and South Asia, both of which face rapid population growth, rapid urbanisation and under-developed housing-finance systems (Figure 2). Addressing this is problematic. Lenders face high credit risks, a lack of financial literacy among low-income households, difficulties in registering mortgage liens, the cost and time of foreclosing on properties, and a lack of access to long-term funds.
The supply side is challenging, too. Typically access to land and property rights limit the housing industry’s ability to undertake large-scale affordable developments. Regulatory obstacles, such as difficulties in registering title or outdated building codes and planning regulations, add to the time and cost of building houses and limit affordability. Developers also often find it hard to access appropriate, long-term funding and can be required by lenders to provide such documents as feasibility studies that can only be produced once financing is in place. Effectively, the housing industry is hampered because lenders are unwilling to take the risks associated with new developments targeting social demand. A lack of public finances can also impede the state or local authorities in providing appropriate levels of infrastructure or public equipment to housing projects. Lastly, other common problems that developers face are the cost and availability of inputs including skilled labour, primary infrastructure – sewerage, access roads, electricity, etc. – and raw materials, which often have to be imported or are difficult to source in bulk in emerging markets.

From public-driven policies to public-private partnerships

In emerging markets, delivery of affordable housing solutions was considered the domain of governments, often with support from donor-driven bilateral or multilateral institutions. Governments, however, should not aspire to be the sole providers as the scale of demand now vastly exceeds fiscal resources. Radically different approaches are required to address housing shortfalls at the pace required. This means mobilising commercial capital and embracing market-based housing solutions capable of addressing lower-income housing. Broken million-home promises, the inability to resolve land rights and failed housing banks must all be consigned to history.
Going forward, governments need to work with the private sector to create a business-enabling environment. There are a multitude of potential actors involved in housing delivery – households, sometimes represented by community-based organisations; financial institutions; developers, who feed a construction sector made up of many different-size companies from the local mason to international corporations; and municipalities. The role of government should be to put sound public policies in place to promote an efficient housing production chain and remove obstacles from the paths of potential actors to ensure they can work together effectively, enabled by the right incentive structures.
The housing industry requires sound macro policies guaranteeing low volatility, low inflation to promote longer-term finance, and lower interest rates – such an environment can do more to improve affordability than the largest subsidy schemes. Leveraging capital markets is another fundamental for ensuring that the right instruments exist to channel long-term funds from pension funds, insurance companies and investment funds into long-term housing investment. Access to land, whether for reasons of unavailability or insecurity of the regulatory environment, is another of the major hurdles to making housing accessible in emerging countries. Public authorities need to unlock land banks, effectively ‘dead capital’, while better titling systems could expand property rights, making reliable and secure collateral available to all. Municipalities and local authorities also have a key role to play as the primary developers of urban plans. Sensible zoning, transportation systems and urban infrastructure planning provide the framework for efficient cities and can boost the economic rationale for developers to engage into affordable urban housing.
To maximise the multiplier effects, housing policies should consider the whole housing value chain, including such related sectors as finance and real estate. Developing housing is also an opportunity for related areas, especially the construction sector, which is a large employer of unskilled labour. To promote inclusive housing solutions, instruments such as guarantees, subsidies or tax incentives that boost the availability of finance for housing units for the most disadvantaged should be developed – working hand-in-hand with the private sector.

Meeting the world’s housing needs will contribute to the World Bank’s objective of shared prosperity. Housing development has numerous multiplier effects, providing much needed employment, both in the construction industry and related sectors varying from the supply of materials, through finance to the supply of fixtures and services. Economic empowerment through housing may, however, require specific support to ensure housing solutions are made available to lower-income groups. Depending on the availability of government resources, this may involve targeted, smart subsidy schemes working hand-in-hand with the private housing and housing finance markets. It may also mean establishing the right conditions for a private rental sector to cater for the needs of low-income households. Good quality, affordable rental housing can act as a buffer for the absorption of migrants, but, without planned housing solutions, unplanned slums will result.

Earthen construction, an additional way to house the planet

Concrete, a solution for sustainable construction