Adapting to climate-change: the private sector can contribute

Adapting to climate change is one of the greatest challenges of this century – its effects are already evident and widespread, and the developing world is particularly vulnerable. Multilateral development banks have a significant role to play in supporting climate resilience as they can offer dedicated financial and technical solutions to their clients. Their experience shows that private sector can play a key role in scaling up adaptation finance.

Stabilising the global climate is the most important challenge of this century. For 38 consecutive years now the annual global temperature has been above average, and 2014 was the warmest year since recording began in 1880. The effects are already evident – the frequency of extreme weather events, such as heat waves and droughts, has increased damaging agriculture and endangering lives, while sea levels are rising, threatening coastal communities and infrastructure. The developing world is particularly vulnerable – a risk that has the potential to further widen the North-South gap. Current financial flows of USD 4.4 billion per year (Buchner et al., 2011) dedicated to improving the climate resilience of the developing world are hardly enough to cover current and future climate adaptation needs. The World Bank estimates that USD 70–100 billion will be required to make developing countries’ assets more climate resilient.

Climate-change adaptation means anticipating adverse effects and taking appropriate action to prevent or minimise damage. This has sometimes led to a perception that climate resilience is a public good that is primarily the responsibility of governments, through for example, the provision of basic weather information, risk management policies and disaster planning (Deloitte, 2013). But the private sector is also exposed to the impacts of climate change, and is already developing a range of responses. From a business perspective, climate-change adaptation is also about taking advantage of opportunities that may arise, as well as responding to threats.

The private sector has recognised that a changing climate poses risks, including disruptions to operations due to extreme weather events, damage to essential infrastructure and transport routes, and variations in water quality and availability as a result of extreme weather events. Physical risks, as well as supply chain and raw material risks, are particularly important for the agricultural and manufacturing sectors. Other risks include financial and regulatory risks. Over recent years, the European Bank for Reconstruction and Development (ERDB) has experienced rising interest in projects aimed at making assets more climate resilient – largely from the private sector. In 2013 and 2014 alone the EBRD provided 18 private sector projects with designated adaptation finance of USD 162 million. A study commissioned by the EBRD on behalf of the Multilateral Development Banks (MDB)¹ found that MDB private sector adaptation finance equalled USD 270 million in 2013 and 2014, making USD 1.5 billion of MDB investment more climate-resilient (Vivid Economics, 2015). The total value of MDB private sector projects with an adaptation component amounted to USD 5.5 billion, which shows that roughly USD 4.1 billion of additional finance was mobilised from private sources (Figure). This illustrates the significant role that private sector can play in scaling up adaptation finance. Around 80% of MDB private-sector adaptation finance flowed to middle-income countries, with the bulk going to upper-middle-income countries in Eastern and Central Europe, the former USSR and Turkey. This could be partly due to the fact that these economies are highly vulnerable to climate change and, in addition, have a relatively more developed private sector with a stronger enabling environment – arguably a determining factor in the absorptive capacity for private-sector adaptation finance. 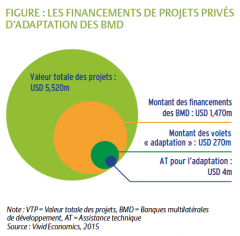 MDBs adaptation finance flows mainly to agriculture2, followed by the industry, extractive industries, manufacturing and trade sector. According to EBRD commissioned study, the most frequently stated risks that private sector clients want to address is increased water scarcity – a risk that is very tangible. Unsurprisingly, those risks that are less tangible and likely to occur over the medium-long term – such as hydrologic variability for example – are less often stated as the main motivator to take action. The MDB portfolio is dominated by investment in technologies that aim to improve clients’ operations, such as technologies that increase resilience to drought and enhance water-use efficiency. These are predominantly measures that both optimise business operations and make it more resilient to climate change – as such they can be classified as win-win.

The predominance of no-regret activities is unsurprising given the competitive force that determines the private sector’s investment decisions – firms and their owners are often primarily concerned with maximising returns in the short- to medium-term. Then, amongst EBRD clients, agri- and manufacturing businesses are the most advanced in adapting to climate change. For instance, many food processing companies that require large quantities of water are now seeking innovative solutions to make their operations more climate resilient – a phenomenon that is especially evident in countries that show a high vulnerability to climate change and in particular water scarcity (Box 1).

Water scarcity is a growing concern in Morocco, where the frequency of droughts has increased more than fourfold over the last century and a further decline in annual precipitation is projected. An EBRD client, a juice producer, invested in more water-efficient processing and water reuse in its production facilities, reducing water consumption, thus decreasing its exposure to the risk of water scarcity. Climate models project an increase in temperature by more than 3.5 °C and more frequent heat waves Jordan, where growing demand for space cooling is stressing already scarce energy resources. A local developer, planning heating and cooling systems for the regeneration of an urban neighbourhood, has with EBRD support invested in air chillers, a new technology that provides more efficient cooling and significantly reduces water consumption. In central and southern Kazakhstan an occurrence of increasing water scarcity is projected, which would further intensify the existing pressure on water resources by the country’s thriving extractive industry. With EBRD’s support, a Kazakh company in the natural resource sector invested in water treatment facilities, enabling it to cover most of its water demand by recycling otherwise discharged water.

Barriers, nonetheless, still remain and in some cases it is not possible to turn potential opportunities into bankable adaptation projects. Especially when climate change impacts are highly uncertain and expected to occur in the medium to long-term, private clients are less likely to take action even if the investment has a long life cycle. Furthermore, many clients have limited know-how about how to incorporate climate change consideration into the investment design – and regrettably, there is no fit-for-all solution. Limited availability of expert support, for instance through specialised consultants, is another barrier that prevents adaptation projects from being realised, as too is a lack of climate data. These barriers are frequent in developing economies although these countries are the ones that are most vulnerable to the impact of climate change.

However, to overcome these barriers, the range of technical and financial solutions is growing. Technical assistance targeted at clients is an important facilitator of private-sector adaptation finance: many had to be convinced of the relevance of adaptation. Feasibility studies and resource efficiency audits have proved to be useful tools. They help clients identify climate risks, derive technical solutions and turn them into bankable projects. The methodology includes benchmark analysis, risk assessment, capital investment appraisal and an implementation plan. Specialised consultants are commissioned to carry out the audit, which includes visits to a client’s premises and an analysis of resource-management practices, and sometimes the creation of corporate social responsibility strategies. And if a project has been identified as climate-sensitive, projected climate conditions over the lifespan of the project’s assets are taken into account. Many MDBs now offer technical support to their clients on their path to improving climate resilience (Box 2).

In 2014, the EBRD agreed a USD 50 million loan with Tajikistan’s power company to finance the first phase of the rehabilitation and modernisation of the 126 MW Qairokkum hydropower plant, which supplies electricity to 500,000 people. The project is jointly financed with the Climate Investment Funds’ Pilot Programme for Climate Resilience (PPCR). Tajikistan is experiencing climate change; average temperatures are rising, precipitation patterns changing and glaciers retreating, all of which could impact the hydropower sector. Water flows into the reservoirs may alter, affecting the sector’s ability to generate electricity. Given that 98% of Tajikistan’s electricity is generated by hydropower, this could have a serious effect on the economy as a whole. The EBRD supported the Tajik company through feasibility studies on integrating climate-change considerations into the investment design and expert modelling of future hydrology – in other words, the water inflow into Qairokkum’s reservoir – under different climate scenarios. This formed a basis for selecting the most suitable rehabilitation design. In addition a dedicated technical assistance package will assist the company as it mainstreams climate change in the operational management of hydropower assets.

The MDBs can also offer dedicated financial solutions even if barriers are considerable, for instance when climate data is limited or when the approach to incorporating climate-change considerations is new. In addition to funding feasibility studies or resource efficiency audits, concessional finance through such partners as the Climate Investment Funds (CIF) can be provided.

Adapting to the impact of climate change is one of the most important challenges of the century. If left unmanaged, large parts of the world will suffer as their assets and infrastructure are not designed to operate under the changing circumstances. There is reason, however, to believe that things are moving forward. Whilst the private sector is increasingly engaging in finding solutions to adapt to climate change, other market players such as the MDBs are starting to mainstream climate change adaptation into their business operations.

Is industry compatible with climate?