The green bonds market is booming – boosting the growing flows of private capital being channelled towards energy transition and with the potential, ultimately, to encourage the direct financing of green projects in the world’s developing countries. This is a relatively young market, though, and standardisation measures are needed to enhance its credibility.

Green bonds are on a roll. Today this new type of loan has become a compelling tool for funding the energy transition and environmental protection, particularly in developing countries. As a debt security, the green bond has the same financial characteristics as a standard bond, i.e. the same guarantees, same seniority,1 and same rating. In purchasing these bonds, investors (such as asset-management or insurance companies) lend money to the issuing company, which repays them with interest at the end of a given period. The difference between green bonds and conventional bonds lies in the investment’s destination. Green bond issuers undertake to allocate the funds raised to ‘green’ projects and to inform investors of how the funds will be used, for instance for renewable energy projects, energy efficiency, waste and wastewater management, public transport or safeguarding biodiversity. The issuers usually call on independent experts to validate the environmental quality of the projects they are proposing. 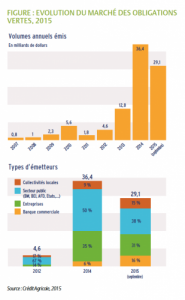 The green bonds market, which three years ago was still tremulous, has grown significantly since 2013: annual amounts increased almost tenfold between 2012 and 2014, with more than USD 37 billion issued (Figure).

According to some observers, the market will exceed USD 100 billion by the end of 2015 (Climate Bonds Initiative, 2015). Initially the green bonds market was dominated by international public institutions such as the European Investment Bank (EIB) and the World Bank (WB) and came in response to demand from a handful of institutional investors interested in environmental issues. Little by little the private sector arrived on the market: in November 2013, EDF raised €1.4 billion through green bonds to fund its EDF Energies Nouvelles subsidiary. This was followed in May 2014 by a €2.5 billion green bond issue by ENGIE (formerly GDF SUEZ). A number of municipalities have also demonstrated their interest in green bonds. For example, between 2012 and 2015, Paris Region raised more than €1.5 billion from the issuance of green and socially responsible bonds.

This steady pace of green bond issuance has won over a broad array of institutional, public and private investors, from Swedish pension funds and ‘responsible’ US fund managers to ethical Dutch banks and socially responsible French investors. Part of the reason for this enthusiasm is growing investor interest in sustainable development issues. Green bonds do indeed offer a number of advantages in this area, such as a direct link to identifiable projects, no abandoning of yield or liquidity, zero ‘project’ risk,2 and increasingly frequent reporting on the environmental and social impacts of the projects being funded.

Besides the financial interest, growth in the green bonds market also reflects the desire to develop financial tools dedicated to combating climate change.3 In a bond market historically insensitive to environmental issues, this has meant first and foremost raising awareness of the climate issue and introducing it into the financial markets. And the gamble has paid off: today there is not a single bond issuer unaware of the existence and the terms of the green bond. It has also meant creating a new market, since green bonds are destined to become a full-fledged asset class with its own dedicated funds and specialist investors. There is still a way to go, but the prospect of a deep, liquid and diversified green bonds market worth several hundreds of billions of dollars is no longer a pipe dream. Although the development of green bonds – initially anecdotal – took many by surprise, these bonds have now become a significant market, due in no small part to the issuers, investors and bankers who took the time to work on a product which, in addition to being economically motivated, is in the general interest. A perfect example of an innovative solution emerging from the bottom up.

There is no doubt that the appearance of green bonds is also good news when it comes to funding projects in developing and emerging markets. In Asia, Latin America and Africa, combating climate change has particularly substantial funding requirements. The United Nations Framework Convention on Climate Change (UNFCCC) predicts that developing countries will need investment of between USD 28 and USD 67 billion per year between now and 2030. Emerging markets are also climbing on the bandwagon: green bonds have already been issued in India (for example by Yes Bank and EXIM Bank of India) and in Latin America (by Energia Eolica and BRF), and many observers expect the market in China to take off soon. Green bonds are furthermore excellent tools for promoting sustainable development to market players. As regards issuers in developing countries, the desire to issue green bonds can lead institutions to step up their Environmental, social and governance (ESG) policies. For example, some banks in emerging markets are planning to ratify the Equator Principles4 to make it easier for them to issue green bonds. On the investor side, issuing a green bond to fund infrastructure in an emerging market is one of the best ways to educate institutional investors in mature markets on the specifics of such projects. For example, anyone purchasing the AFD’s Climate Bonds (issued in September 2014) will be aware of Colombia’s Medellin integrated urban renewal project and know that a green corridor consisting of a light-rail train and two Metrocable lines in a disadvantaged region can be both a profitable investment and benefit the local population. In the long term, green bonds can help boost flows of private capital originating in mature markets and used to fund green projects in developing countries. Some international development agencies also use green bonds to fuel the local bond markets. The World Bank Group, for example, has issued several green bonds in emerging market currencies (Mexico, Peru and China) to boost the local market and raise awareness among local investors of social or environmental issues, particularly in regions where these issues still tend to be absent from investment decisions. Green bonds are also a vehicle for developing responsible finance in these markets.

An increase in scale

In addition to the above, green bonds can be a step towards the direct funding of ‘green’ actors and projects in developing countries. The target product in such cases would be a project bond or portfolio asset (securitization) where the project (or assets) risk would be borne directly by investors. Circumstances are certainly favourable: having created pockets of green bonds, today’s investors are looking for long-term assets and returns, which means focusing on both project bonds and emerging markets. Development banks can get involved in a number of ways to facilitate this development, either in a targeted way or concomitantly. Firstly they can act as aggregator and take on projects that would normally be too small to access the bond market, and play on portfolio diversification to reduce refinancing costs. Such transactions would make it feasible to distribute a small-scale transaction in the markets. Secondly they can provide partial guarantees to make it easier to bring certain projects to the market (construction phase guarantees, political risk guarantees, etc.). OPIC5 and the Inter-American Development Bank have provided such guarantees for a number of green bonds. Development banks can also increase the credit for bond transactions allowing them to reach the rating levels expected by many institutional investors. This involves undertaking to cover first losses. Several multilateral development banks are currently working on this type of set-up in connection with green bonds. Lastly, these banks have the ability to underwrite green bonds issued by developing countries in full or partially. This allows the arranging banks to protect themselves against transactions that are too risky according to traditional analysis criteria: if the banks fail to sell a transaction, they are committed to a possible partial buy-back. The International Finance Corporation (IFC) has intervened in this way for the green bonds issued by Yes Bank, which launched the green bond market in India.

It is clear that green bonds are a compelling tool for supporting ‘green’ projects in developing countries. With development bank expertise, the tool could even lead to direct funding of these projects. However, the current green bonds market, which is self-regulated, is exposed to a major risk, namely what would happen if an issuer blatantly violated its ‘green’ commitments? Until now the market has managed this risk well, since most actors (issuers, investors and banks) have recognised the best practices6 drawn up by four banks and published in early 2014 in the form of Green Bond Principles (GBP). Also, the market is trending towards improving these practices through more second opinions on the product’s risk and higher quality reporting on social and environmental impacts. In any event, this lack of regulation will probably not last, and already a number of regulators and governments are looking with interest at this promising tool for funding the transition to a low-carbon economy. There must nevertheless be a balance between framework and incentive, and the Paris Conference COP21 in December could be just that opportunity.

1 Seniority defines the order of repayment in the event of bankruptcy.
2 There is no risk to the project itself since funding is directed towards an issuer who in turn directs the funds towards a project grouping. The risk is therefore borne directly by the issuer and indirectly by a project grouping.
3 For this reason, green bonds have often been issued by development banks, such as the European Investment Bank, World Bank, IFC, KfW and the AFD.
4 The Equator Principles (EPs) is a risk management framework, adopted by financial institutions, for determining, assessing and managing environmental and social risk in projects and is primarily intended to provide a minimum standard for due diligence to support responsible risk decision-making.
5 The Overseas Private Investment Corporation is the US government’s development finance institution.
6 Crédit Agricole CIB, Bank of America Merrill Lynch, Citi and J.P. Morgan.

References / Climate Bonds Initiative, 2015. Bonds and Climate Change –The State of the Market in 2015. CBI, July 2015. Available online at: https://www.climatebonds.net/files/files/CBI-HSBC%20report%207July%20JG01.pdf