Well-functioning areas are a key issue for Africa’s development. The housing sector, with the construction of millions of affordable homes for the masses in Africa, represents a major challenge but also an opportunity for sustainable development, employment creation and poverty reduction. The magnitude of needs requires rethinking traditional business models to provide relevant solutions. The specificity of the affordable housing market in Africa calls for financial and operational innovations.

Recent studies show a positive correlation between levels of urbanization and economic growth1: urbanization is, in and of itself, a wealth creating process. Therefore, well-functioning urban areas are critical to Africa’s development. The housing sector, with the construction of millions of affordable homes for the masses in Africa, represents a major challenge but also an opportunity for sustainable development, employment creation and poverty reduction. One of the most striking examples of housing shortages can be found in Nigeria, Africa’s most populous country and most robust economy, where the World Bank recently estimated the national housing shortfall at 17 million and in the state of Lagos (the smallest but most densely packed of the country’s 36 states) at 4 million. Very fast demographic and urban growths, inefficient public policies and absence of subsidies to reach an affordable home price compared to the income of the majority of citizens are some of the explanations for Africa’s ill-equipped housing ecosystems to meet the demand. However, lack of financing available for developers interested in housing middle and low-income households is also a major issue. Indeed, the correlated explanation of Africa’s ill equipped housing ecosystems to meet the demand is due to three main causes: a fast growing demography and urban growth, inefficient public policy and the lack of subsidies to reach and affordable home price compared to the income of the majority of citizens. Thus, the main question is how to find the necessary funds for affordable housing as it is a key leverage for growth in Africa?

Housing at stake in Africa

The housing value chain in most African countries presents many gaps and is often dysfunctional. Chaotic urbanization, lack of affordable serviced land, a complicated and long administrative process to obtain official land title and construction permits, and high construction costs due to reliance on imported material and skills shortages mean that formal housing only represents 10% of housing built in African cities2. As people migrate to cities, the slums of Africa’s cities overflow. 200 million Africans live in slums, making up 70% of urban inhabitants, and of these, 175 million do not have access to acceptable sanitation3. Rapid urbanization is an ongoing process which will continue for many years, and the urban situation should continue to worsen if major change is not made.

Due to a lack of funding within already-constrained budgets, most governments have traditionally only verbally encouraged the private sector to deal with housing for low and middle income households without providing any reasonable incentive to these profit-driven organizations. Even when housing initiatives are put in place, the outcomes are rarely at the level of the objectives. Unsurprisingly, the majority of the real estate development community stays focused on providing for the upper/upper-middle class. Generally, developers neglect the lower segments of the housing market, a problem that is compounded by the fact that most construction lenders find this market group too risky because of the lack of effective demand (based on informality of both income and land tenure of end-users). As a consequence, the construction sector’s percentage of the Gross Domestic Product is still low compared to the potential represented by the affordable housing market. The construction sector in Nigeria corresponds only to 2% of the country’s GDP. Other countries, like Cote d’Ivoire and Ethiopia with respectively 7.5% and 5.6%, show more positive signs4. Affordable housing5 represents a global economic opportunity to reconsider urbanization trends, housing policy as well as urban planning. The formal sector requires to significantly scale up its production to deliver quality affordable housing adapted to the demand in Sub-Saharan Africa.

Along with considerations of the ability to pay, practitioners and policymakers need to also remember that private sector developers are motivated by perceived profitability. Research conducted by the Centre for Affordable Housing Finance demonstrates the affordability, or lack thereof, of housing constructed by a formal developer (and not those homes that are self-built). 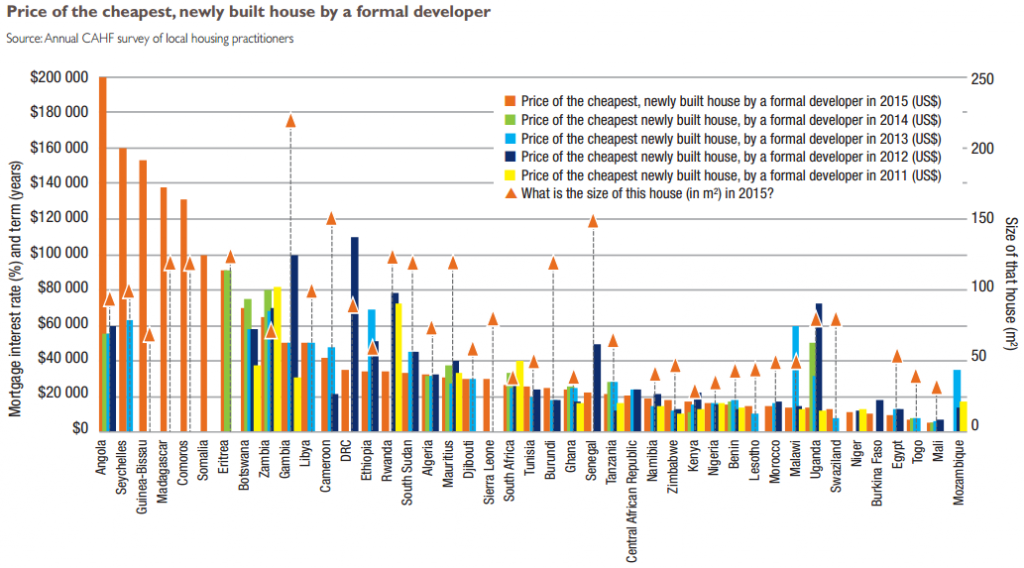 The magnitude of needs also requires breaking the mould and using new business models. Research conducted by the Affordable Housing Institute (AHI) highlights that the Mission Entrepreneurial Entity (MEE) has become an essential actor in affordable housing without which housing finance ecosystems do not deliver. “Mission Entrepreneurial Entities are private non-government entities that are in the business of making ecosystem change by doing actual transactions valuable in themselves that also serve as pilots and proof of concept6”.

According to David Smith, the Chief Executive Officer of AHI: “Government creates legislative programs and affordability resources, communities identify challenges. Without MEEs, programs can be stillborn and problems can go unsolved. Once MEEs are in place and functioning, like pollinating bees they make necessary connections, so other players in affordable housing provision find their natural places and become much more productive.” He describes a MEE’s three basic attributes. This first one is the mission assigned as their goal is impact not only making profits. The second one is being entrepreneurial as they are private actors who do new things. Last but not least, they are self-contained enterprises that must make profits and positive cash-flow.

Participating in the creation or reinforcement of affordable housing companies would permit DFIs and African governments (on both the sovereign and sub-sovereign level) to rely more on MEEs as key stakeholders, making them able to execute important investments for large scale projects with major impacts. Promoting market-based housing solutions needs to be explored for various categories of the African society, particularly for middle- and low-income households. Some form of subsidies should be made available to reach low income households [see box below].

The Affordable Housing Institute’s research shows conclusively that MEEs are grown consciously from the right organizational vision, business model design, value chain linkages, and civic supporters and partners. They are the essential counterparty of government and they achieve scale because their founder(s) have a scale-oriented vision from the beginning. Companies which can be qualified as MEEs in Africa are setting business models to develop affordable housing show various characteristics.
Government counterparts within the constructs of a PPP are most of the time favoured. In the context of dysfunctional government administration, some MEEs prefer to work without the participation of government. Strong project management and budget control is required to achieve full community buy-in and support. MEEs have significant role in community organization, for instance by forming cooperatives, especially where there is a vacuum in local society and disconnect between the government and its constituents. They make relatively less profit per housing unit than other regular real estate companies, since usually 25% of return on equity is required by real estate investors, whereas MEEs target both social and financial goals. Cross subsidizing model is often required: parts of the benefits made on the “most expensive” housing products participate in financing the “less expensive” one. Finally, MEEs are particularly client oriented by proposing new types of services adapted to the demand as lease to own, housing micro-finance or support services.

Although access to financing for developers of affordable housing in Africa is a challenge, MEEs face four main additional hurdles.

Firstly, construction companies and local real estate developers lack access to long-term finance, hindering their ability to systematically develop large-scale projects or to build their capacity. Related to this, a recent World Bank study further clarified the disparity in lending between high-income and low-income countries, showing that loan durations to firms in low-income countries average approximately 2 years, which is less than half of the average of loan durations to firms in high-income countries (approximately 5.5 years).7
Secondly, unsophisticated institutions or relatively high-interest money in the local capital markets drives developers to look internationally for more competitively-priced money overseas. Limited efforts are made to structure and stimulate local investment in affordable housing.
Thirdly, international investment is not always covered and protected by national laws, which limits the flow of overseas money. As an example, Orascom, one of Egypt’s largest developers of affordable housing, invested heavily in a project in another country; despite project profitability, Orascom has been unsuccessful in its attempts to repatriate these funds to Egypt. To combat these challenges, some countries, like Rwanda, present a specific “package” to attract and protect foreign investment.

Last but not least, developers, particularly those that would fit the definition of a MEE and, by extension understand the demands of the intended users of affordable housing, often lack the knowledge of how best to position themselves in front of lenders interested in mitigating the risks associated with development.

The affordable housing market in African cities is constituted of diverse sub-markets which, because of their specificities, calls for innovations in term of finance and operational implementation. Various experiences in Africa are actually encouraging and would deserve to be scaled up and adapted in other countries.
How, then, can the international development community help developers of affordable housing access the long-term financing needed to meet the overwhelming demand in the global south? In last year’s report on affordable housing, the McKinsey Global Institute recommended four types of interventions: increasing equity, improving debt terms, providing tax relief, or de-risking development.8 Although none of these represent a perfect solution, many of the world’s prominent development finance institutions are committed to acting as intermediaries, promoting the use of a combination of these tools. Meanwhile, as theoreticians and practitioners work together looking for answers, the majority of the world’s urban poor is left in desperate need of decent, sustainable, affordable housing options.

EDH and CHC: the cases of two MEEs

Enterprise Development Holdings (EDH), one of the leading developers of affordable housing in Malawi, is producing approximately 1,000 units of rental and for-sale residential units in the country’s urban hubs of Lilongwe and Blantyre. With capital from Reall (formerly Homeless International) and technical support from European DFIs like GiZ, EDH is effectively recycling its capital by cross-subsidizing its affordable rental homes through the sale of market-rate homes. Further, in response to limited access to high-quality construction materials, the firm has created an off-shoot facility that is responsible for experimenting with various materials well-suited to grow in the country (like bamboo) and constructing a vertical-shaft kiln that produces a minimum of 20,000 bricks per day from soils harvested on-site.

Countrywide Housing Corporation (CHC), a residential development firm focusing on the provision of affordable housing in northern and central Nigeria, has creatively leveraged its initial capitalization from ASO Savings & Loan against land holdings under the control of notable stakeholders to deliver low-cost, high-quality housing. In the northern city of Kano, CHC has partnered with the State Government of Kano and the Emir of Kano to develop a 550-home community priced for affordability. CHC celebrated a high-profile ribbon cutting in early December 2015, attended by dignitaries from across the country eager to replicate the pilot community’s success.

The positive impacts of a responsible cement industry