The study demonstrated that liberalisation does not just benefit passengers and cargo shippers.  Increased levels of air service stimulate employment in the aviation industry as people are needed to handle passengers and their luggage and to operate, service, and maintain aircraft. Direct aviation industry employment tends to be higher-skilled and well paid (Amankwah-Amoah et al, 2011), providing socio-economic benefits to employees, their families and communities.

The study estimated that further liberalisation of the African aviation industry could generate an additional 15,000 direct jobs of this nature across the 12 study countries. This includes employment by airlines, airport operators, air traffic control, ground handlers, airport security, immigration and customs, aircraft maintenance, etc. This additional aviation activity also has “spin-off” impacts for downstream industries that supply and support the aviation activities, such as food wholesalers for in-flight catering, refineries producing jet fuel, travel agents booking flights, etc. An additional 23,000 jobs are estimated to be created in these indirect industries. 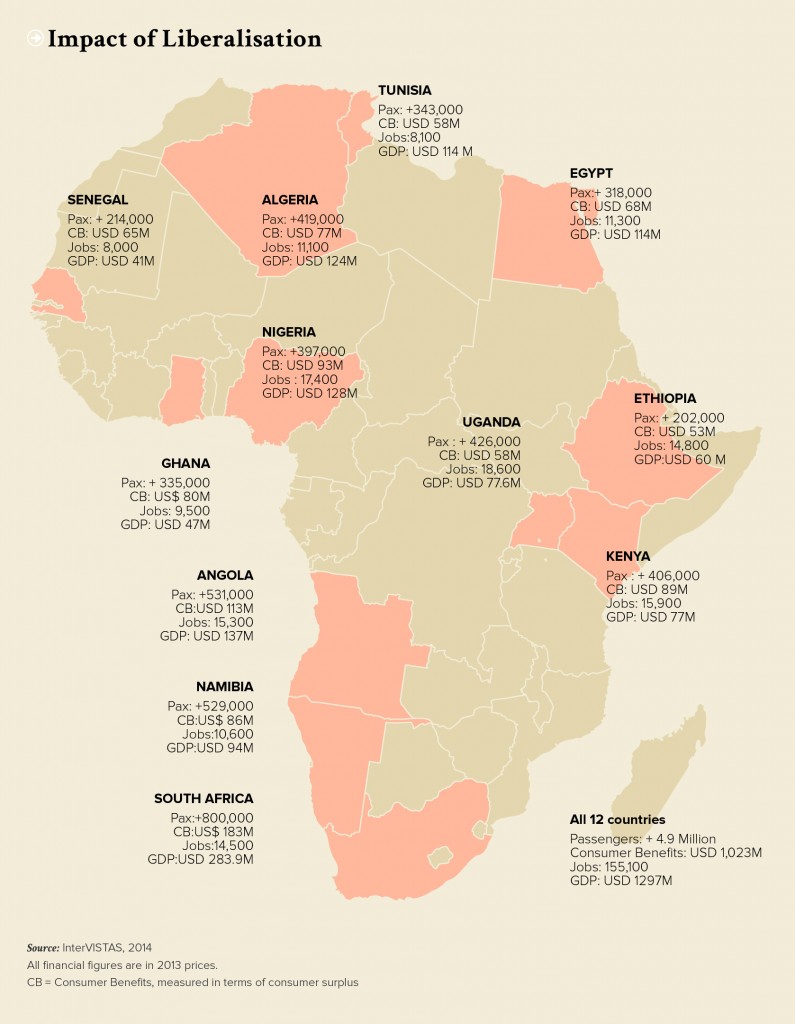 Methodology:
InterVISTAS Consulting conducted a study for the International Air Transport Association (IATA) to examine the socio-economic impacts of liberalising intra-African air markets. This study involved modelling the transmission mechanisms by which liberalisation leads to greater air connectivity, resulting in increased traffic volumes and generating direct and wider indirect economic benefits. It also involved analysing the impact of liberalising air markets between 12 countries within Africa and quantified the potential economic benefits of further liberalisation for the countries studied.

Successful liberalisation could also boost tourism in the 12 countries studied, generating an estimated USD 1.3 billion in additional spending. The World Bank notes that tourism has the potential to stimulate development in a wide range of economic sectors, from construction and manufacturing (i.e., new tourism and accommodation facilities), support for the arts and local craftwork, to more advanced industries such as telecommunications, finance and legal services (World Bank, 2013). The related socio-economic benefits extend to the indirect sectors that supply the tourism industry such as food wholesalers, taxi and transportation companies, all of which provide employment and income for thousands of people across the Continent. The increased tourism following liberalisation was estimated to generate over 75,000 jobs in the 12 countries in tourism and related industries.

Perhaps most significantly, enhanced air services can facilitate many other sectors of the economy by supporting increased trade, attracting new businesses to the region, encouraging investment and boosting productivity. Industries and activities that would otherwise not exist in a region can be attracted by improved air transport connectivity. The benefits to trade, investment and productivity from liberalised air services were estimated at 42,000 jobs across the countries studied, generating incremental GDP of USD 343 million.

The increase in aviation activity, tourism, trade, investment, productivity and other economic benefits will generate considerable extra employment and boost economic output in the 12 countries studied. As the map shows, liberalisation between the 12 countries is estimated to generate 155,100 jobs in aviation, tourism, and the wider economy and to add USD 1.3 billion to annual GDP (about 0.07% of the combined GDP of the 12 countries). The benefits for employment go far beyond the aviation industry itself and have the potential to enhance the productivity and wealth of a diverse range of industries across the African continent.

The African Mobile Phone Market: Beyond the Boom Phase, Between the Promise and Uncertainty of Maturity