The low-cost airline model has experienced rapid growth right across the aviation sector with the notable exception of Africa. With the rise of Africa’s middle classes and the gaps in its road network this model should be especially well-suited to the continent’s needs. However, the African sector has not really been opened up to competition and the regulatory environment is overly restrictive. Even so, despite the tough business environment, Fastjet is still managing to capture new markets.

The low-cost airline business model (Box) emerged in the United States in the 1980s following deregulation of the aviation industry and has grown rapidly since then. In Europe, Ryanair and EasyJet are the market’s undisputed leaders, while Air Asia and GOL dominate the Asian and Latin American markets, respectively. Today, low-cost carriers are an integral component of the aviation sector; there are nearly 100 in all, and one of them, Ryanair, ranks among the top ten companies worldwide in terms of passenger numbers. The traditional airlines long scorned and underestimated this new business model, dismissing it as marginal and economically unviable but today they nearly all have a low-cost offering in their strategic armoury, especially for short- and medium-haul flights. Indeed the low-cost airlines have radically transformed air travel, making it vastly more accessible. Now you can travel several hours by plane for less than EUR100 just about anywhere in the world – just about anywhere, that is, except in Africa.

The low-cost airline business model
Since regulations restricting competition were scrapped in the United States in the late 1970s, certain airlines have steadily positioned themselves in the low-cost aviation sector. The model adopted by these carriers is based on selling their flights directly to the customer – with tickets that cannot be transferred, exchanged or reimbursed. Flights are direct only: the airline does not offer onward connections or baggage transfer services. Low-cost carriers use secondary airports or more spartan terminals. Check-in procedures are simplified and cabin interiors are designed to maximise passenger numbers. Meals have to be paid for – as do all other additional in-flight and ground services. The company reduces maintenance costs by operating a single aircraft type. Turnaround times are very short (less than an hour) thanks to simplified boarding procedures and lower volumes of baggage handled. Staff sometimes do several jobs: cabin crew may be required to clean aircraft between flights, for example.

With the exception of South Africa, which has budget airlines operating on its internal network, and Morocco, which is served by European operators, the African continent is the major absentee in terms of low-cost air travel. And yet the need for a pan-African low-cost carrier is self-evident given the continent’s size, the poor quality of its land transport infrastructures and the increasing mobility of its middle classes. This was the rationale behind the creation of Fastjet which aims to become the leading pan-African low-cost airline.

Fastjet believes that traditional airline company offerings are one of the factors holding back Africa’s economic development. Cross-border trade and the development of tourism are just two areas severely impacted by the artificially high prices being charged by the traditional carriers in the absence of any effective competition. The continent’s economic growth, increasingly stable political environment and emerging middle class are generating what will hopefully prove to be lasting, structural change, making it possible to launch an airline that is safe, reliable and affordable, serving both business and leisure customers.

Inspired by EasyJet – its holding company EasyGroup is one of the company’s shareholders and is represented at executive management level – Fastjet replicates the formula that underpinned its mentor’s success: a fleet that is standardised (Airbus A320-type aircraft), modern, fuel-efficient and reliable, enabling it to maximise turnaround and arrive on time. Standardisation is one of the mainstays of this model; fares are kept as low as possible1 and additional services (luggage, refreshments, etc.) are charged as optional extras. The website is the company’s only distribution channel, enabling it to keep its marketing costs down as well.

Fastjet chose Tanzania, and Dar es Salaam airport, as the hub for its initial growth phase due to the absence of a major national airline company, Tanzania’s tourist potential, its dynamic economy and its large population of around 50 million people.

Since its inaugural flight on 29 November 2012, the company has served four Tanzanian and six international destinations. Boosted by the success of its Tanzanian operations – Fastjet announced a profit for the first time at the end of 2014 – the company began its international expansion phase, identifying five target markets (Kenya, Uganda, Zambia, Zimbabwe and South Africa). This market represents a combined population of 210 million people – around 20% of Africa’s total population – and has various attributes that are conducive to regional development: all of these countries are English-speaking, connected by historical links and migration flows, and are already trading partners. Fastjet is targeting a fleet of 34 aircraft by the end of 2018, serving 40 destinations and selling 10 million seats a year. This would give it a 13% market share on the routes it serves, equivalent to two return trips a year for 1% of the target population.

The business model is tried and tested, the market potential appears to be sound and the product is well-suited to Africa’s specific constraints. While Fastjet would appear to have every chance of success, certain factors are also impeding its development.

Fastjet considers the excessive constraints of the regulatory environment and the absence of genuinely “open African skies” as the major obstacles to its growth. Each individual country has its own regulatory environment. Although some bilateral air service agreements do exist, they vary considerably depending on the countries involved. In view of the key importance of regulatory issues, Fastnet is engaged in intense lobbying of governments and industry professionals to promote a more liberal regulatory environment. The company has already demonstrated that it can secure agreements that lead to greater liberalisation in African skies – for example by opening new routes, like those to Nairobi and Johannesburg, in direct competition with two major African airlines, Kenya Airways and South African Airways2. 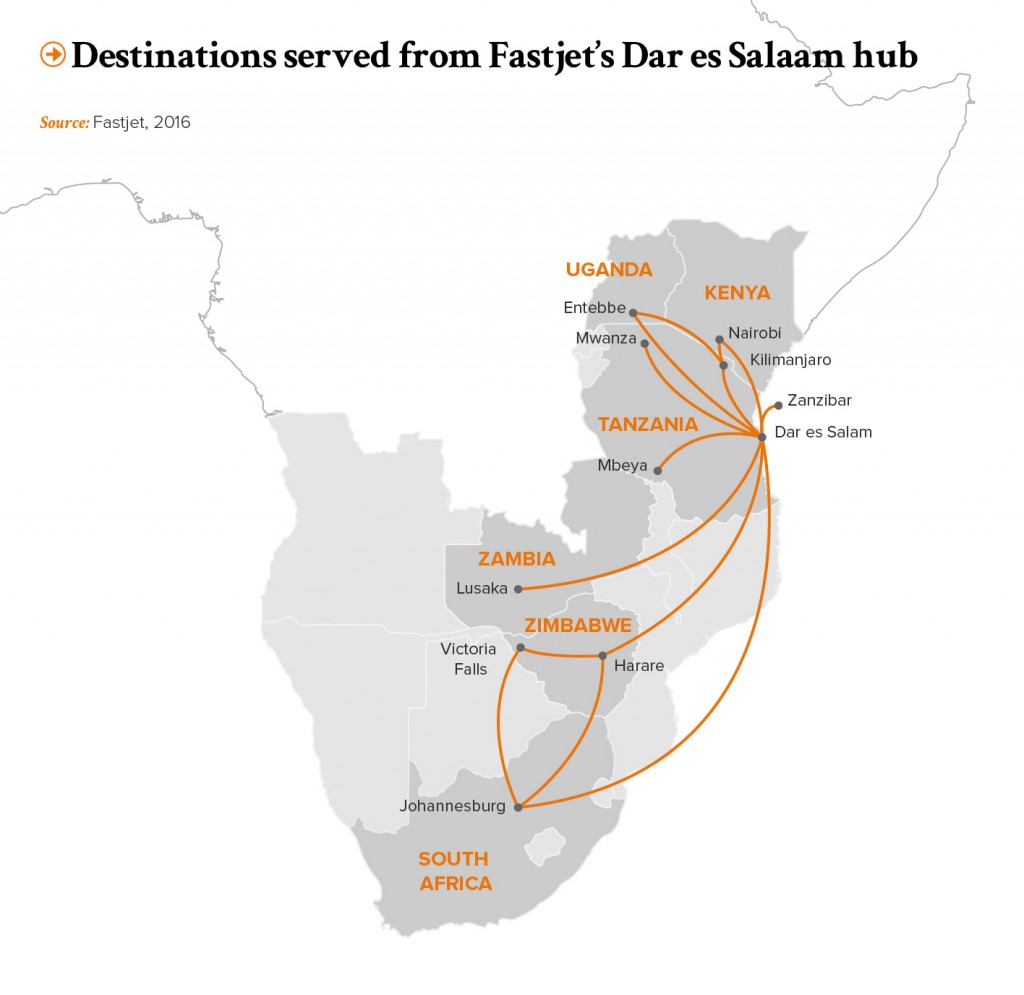 How swiftly and smoothly the company grows will depend on its ability to conclude and safeguard new route agreements. To be profitable, Fastjet will need to quickly attain critical mass in its fleet (around 30 aircraft) as well as optimal fleet utilisation: the load factor will need to be over 80% and each aircraft will need to be in use for more than ten hours a day. This is not yet the case: the average load factor during 2014 was just 73% and the company was then operating just three A319 aircraft (compared to its current fleet of six). Nonetheless, by securing new routes through bilateral agreements the carrier was able to operate its aircraft for blocks of over ten hours a day in 2014 and deliver over 90% of its flights on time – the key to the model’s success.

The presence of an operator like Fastjet on the African continent would appear to be good news. Its model incorporates the key ingredients for growth in this sector that have hitherto been lacking: affordable prices, increased safety and on-time flights. An initiative of this kind helps drive the process of change in – and bring greater flexibility to – the regulatory environment, following a similar pattern to what has happened in other continents. Fastnet hopes that this pioneering strategy will prove to be a catalyst for change in Africa’s aviation sector. Its ongoing development will certainly be interesting to follow, offering a clear indicator of African aviation’s ability to evolve and grow.

This article is based on Fastjet’s Annual Report and Financial Statements for 2014: please consult this publication for further details. The views expressed in this article are those of the author and not of Proparco.

1 For example, the fare from Dar es Salaam to Nairobi is advertised at $30 (excluding taxes and charges) on the company’s website.
2 It should also be stressed that even though the respective national governments are major shareholders in these two companies, they did not prevent a competitor from entering the market.