Air transport is vital for local and global economic development. It plays a key part in regional integration and generating jobs. In terms of the environment, energy and climate, the sector has set itself restrictive, ambitious targets for reducing pollution and CO2 emissions. International donors and lenders and their partners will be needed to support some of these initiatives in the future.

Passenger air transport – essentially short-haul for business trips and medium/long-haul for leisure trips – is a reliable, fast means of transport. However, its image is also associated with highly publicised accidents and environmental harm, i.e., noise, pollution, fuel consumption and much of the greenhouse gas emissions that are to blame for climate change.

Nevertheless, air travel remains the safest mode of transport although there are considerable differences between continents.1 The aviation sector also plays an essential role in local and international economic development by helping to improve access and regional integration and generating social benefits. It transports three billion passengers a year and a third of the world’s freight by value. Directly and indirectly, it represents 3.5% of global GDP and employs 58 million people worldwide. It is generally estimated that one million air passengers generate around 3,000 jobs (ATAG and ADP, 2015). Air transport also enhances access to island economies and to particularly isolated territories (in Russia and Norway, for example). Finally, it provides emergency transport in the event of natural disasters and in war zones.2

Although air transport brings undeniable economic and social benefits, airports are responsible for negative externalities in the form of noise and air pollution. Air transport also generates greenhouse gas emissions but these are at least ten times less than those produced by road transport and only account for 2% of global CO2 emissions (IEA, 2015). Nonetheless, these emissions are growing and if proactive steps are not taken they will increase by 5% per year, which means they will double over the next 15 years.

Fortunately, the sector appears increasingly willing to address its environmental, energy and climate challenges and the main players are voluntarily adopting appropriate measures. The first of these is the International Civil Aviation Organization (ICAO), a specialised UN agency based in Montreal. As an international regulator it comprises 191 member states. It issues standards and recommendations and sets targets, including environmental targets. Aircraft manufacturers are working on fuels, aircraft designs and aerodynamics as well as the energy efficiency of equipment used on-board and on construction and maintenance sites. Airlines too are increasingly looking for ways to improve their passenger load factor3 – primarily for economic reasons, but the energy and environmental impacts of these measures are genuine.

Airline companies are also opting to recycle aircraft – 90% of the chassis can currently be reused.

Airport managers are starting to invest in more energy efficient air terminals (for example, in Italy and India) and in other environmental challenges such as waste and water management. Air navigation equipment is helping to optimise flight paths and flight sequencing, saving precious minutes of queuing and cutting down on flyovers at airports, and reducing fuel and CO2 emissions. The contribution of the Single European Sky Air Traffic Management Research programme (SESAR) deserves a special mention. As the technology arm of the Single European Sky initiative, it has a particular focus on optimising aircraft flight paths.

On the ground, data exchange between airports cuts down on aircraft taxiing and waiting times at the end of runways.

Thanks to the Airport Collaborative Decision Making (A-CDM) approach to sharing information, Roissy-Charles de Gaulle Airport has managed to cut such delays by between 10% and 20%, resulting in a significant 14,000 tonne annual reduction in CO2 emissions. Lastly, electric aircraft traction systems also reduce both fuel consumption and emissions. In total, ground and air optimisation measures can cut energy consumption by around 10%.

Other initiatives are supporting the efforts being made by the sector’s key actors to tackle the environmental and climate impacts of their activities. Airports Council International Europe (ACI Europe) for instance has set up Airport Carbon Accreditation, an airport certification programme designed to measure and reduce CO2 emissions. To date, more than 150 airports – including some of Europe’s biggest – have joined the programme, representing 65% of the Continent’s air traffic. The initiative also extends beyond Europe: in Africa, airports in Enfidha (Tunisia), Abidjan (Ivory Coast) and Libreville (Gabon) have recently received accreditation – the only ones on the African continent to have achieved this. The airports with the highest traffic volumes (and therefore the highest emissions) are not yet part of the programme.

The CO2 Emissions Trading System (ETS) has been used in the civil aviation sector since 2012. Under this EU-backed scheme, airlines which exceed a certain annual emissions threshold must purchase emission allowances. This mechanism has met with some resistance and is currently confined to internal flights and covers ‘only’ 31 European countries. However, it is a start, and the Commission and the ICAO are working on a global emissions market for the sector.

Between 2009 and 2020 the aim is to increase global energy efficiency from 1.5% (manufacturers) to 2% (ICAO) on average each year, mostly with the help of technology and new aircraft. From 2020 on, the objective is carbon-neutral growth (net emissions) and by 2050 net emissions should only be half of what they were in 2005 (Figure). 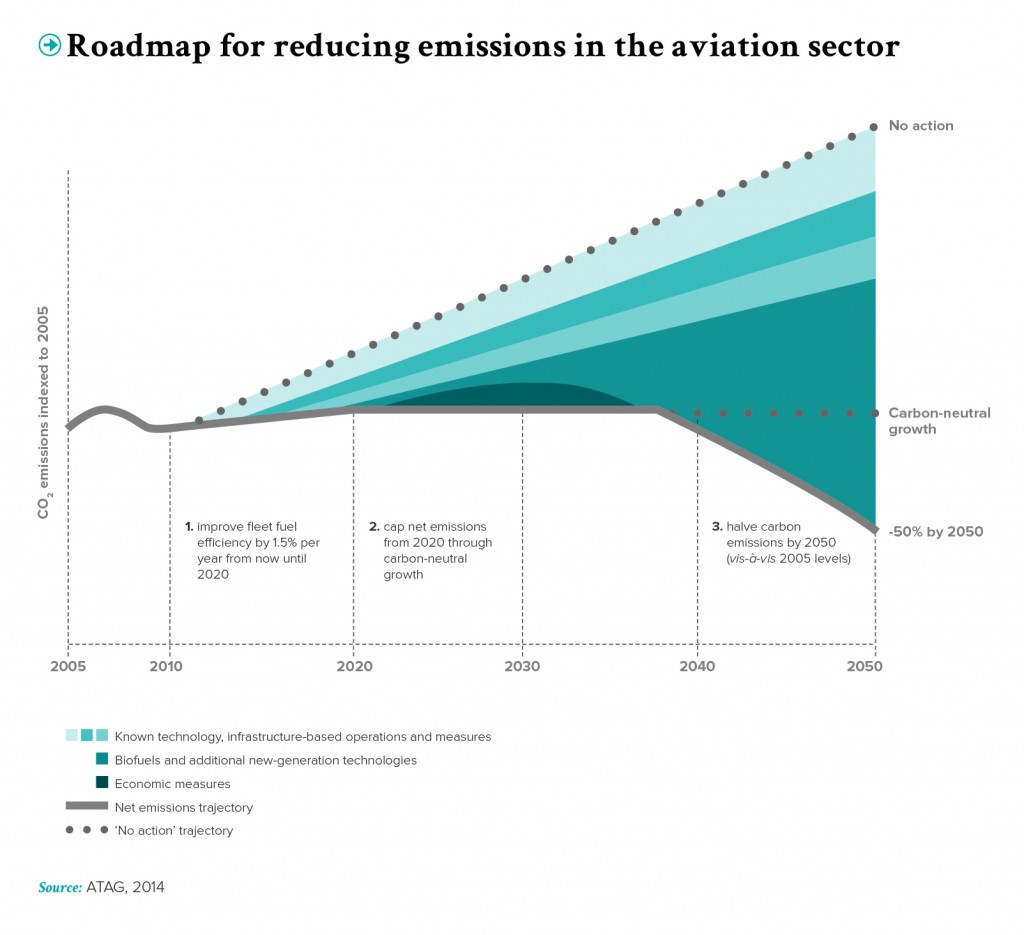 The role of development finance institutions

Agence Française de Développement (AFD), the group to which Proparco belongs, has been involved in the air transport sector for decades, particularly in sub-Saharan Africa and French overseas territories. Since 2009, its average annual contribution to the sector has been around EUR 120 million. The group also operates outside the French overseas territories in Tunisia, the Ivory Coast, Cameroon, Ethiopia and Mozambique inter alia.

Core support for the sector from development finance institutions and AFD in particular focuses on helping developers control the risks associated with environmental and climate requirements. For example, AFD is developing an ex ante analysis for estimating net CO2 emissions generated/saved by each potential project (using ADEME’s “Bilan Carbone” carbon audit diagnostic tool). However, these institutions also need to research new thematic/geographic initiatives that promote a more sustainable aviation sector in line with the innovations being developed by the industry itself. This is already happening on the environmental front. Existing initiatives need to be reinforced by providing support for energy audits with a view to obtaining international certification and developing action plans and investment programmes that can subsequently be funded by donors and lenders. Now that environmental, energy and climate considerations affect all sectors of activity it is necessary to reassess donor and lender intervention strategies in the air transport sector.

Despite the indisputable economic and social benefits of air transport, security and safety issues remain significant together with issues of institutional and financial governance in certain regions. In the environment, energy and climate spheres, research and development activities, experiments and investments are currently focusing on the design, construction and operation of aircraft, air traffic management and airports. By supporting technological advances in airport infrastructure and equipment, investors are helping to make this mode of transport more sustainable.

Disclaimer: This article is the sole responsibility of the authors. AFD accepts no liability for its content.

1 For example, the accident rate is 30 times higher in West Africa than in the USA (World Bank, 2014).
2 For example, in 2013, more than 80 million people in 75 countries benefited from food and humanitarian aid brought in by air.
3 Between 2009 and 2014, the number of flights to and from Roissy CDG Airport in Paris fell by 12% – despite a 10% increase in passenger traffic.

Growth in containerisation signals a modernisation of African ports