Abidjan international airport, a viable concession despite the turmoil

In 1996, management of Abidjan international airport was taken over by a private operator. Although the financial equilibrium of the concession was disrupted by a series of events – not least the 2010–11 Ivorian crisis – the situation has improved markedly since the 2010s. The Airport’s development is closely bound up with that of the national economy and it is currently the focus of an ambitious EUR 100 million investment programme.

Félix Houphouët-Boigny international airport in Abidjan was one of the first African airports to be taken over by a private operator, in this case a public-private partnership. The Marseille-Provence Chamber of Commerce and Industry (CCIMP), which managed Marseille airport at the time, joined forces with the Sofréavia airport engineering consultancy (acquired by the Egis Group in 2006). Together they founded an Ivorian entity, AÉRIA, to which the concession was awarded. Fifteen years later, in 2010, the Ivory Coast government reaffirmed its commitment to the Egis Group and the CCIMP by renewing the AÉRIA concession for a further twenty years.

As the leading economic power in French-speaking West Africa, the Ivory Coast has recorded impressive GDP growth since 2011: according to the country’s Economy Minister, GDP per capita increased over 20% in three years, putting the country back on a growth footing. Abidjan Airport forms part of this regional development infrastructure and since the start of the concession it has reflected general economic trends and faced some serious crises which have been overcome thanks to remarkable adaptability.

In 1995, the poor state of airport installations and the need to modernise them without the availability of public funds led the Ivory Coast government to seek out a private operator capable of deploying a major investment programme. The 43% surge in traffic between 1996 and 1999 required the new operator to adjust its initial budget from CFA 16 billion to over CFA 25 billion in order to upgrade all of the installations (i.e., air terminal, aprons, runways and car parks) to be able to accommodate an estimated two million passengers by the end of the 15-year concession.

The chosen model was accepted by AÉRIA’s international banking partners and backers. One such grouping included the French Development Agency (AFD), the European Investment Bank (EIB) and the West African Development Bank (WADB) which financed 50% of the project – the other half was financed out of the company’s own funds. Beginning in 1996, the work was successfully completed in 2000, transforming Abidjan Airport into one of the best-equipped in West Africa. In 1999 international passenger traffic reached nearly 1.3 million, an all-time record for the airport (Figure). 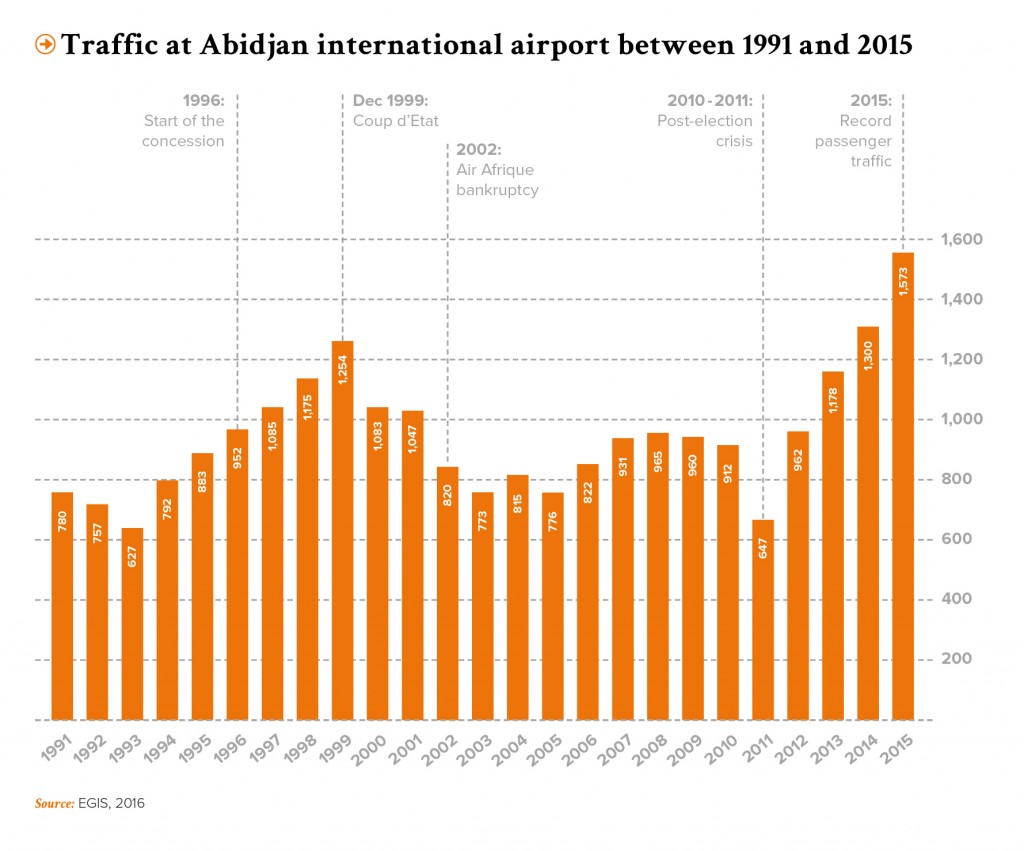 However, the Airport’s financial equilibrium was disrupted by a series of major events, particularly the political crisis in the Ivory Coast which began in 1999 and lasted for 12 years. The terrorist attacks on 11 September 2001 and the resulting fallout among airline companies (i.e., the financial meltdown of Sabena and Swissair, two key airlines in Abidjan) also damaged the airport, as did the collapse in 2002 of Air Afrique which had accounted for 40% of passenger activity. In 2003, passenger traffic stagnated at 700,000 and it was not until 2014 that numbers finally crept back above 1999’s record levels. Throughout this period of uncertainty, it was essential that the managing authority “survived” and the quality of the relationship with the licensing authority – the Ivory Coast government – was critical to this survival. The government increased the level of passenger charges and this appreciation of the financial pressures being faced by a private operator greatly helped preserve the economic and financial equilibrium of the concession as it confronted the slump in traffic triggered by these crises. The quality of the relationships with the financial backers (e.g., the agreement to renegotiate the debt in line with the resources available to the operator) and the operator’s careful management of its overheads also helped the Airport to weather the storm.

The airport operator has clearly demonstrated its ability to weather difficult periods, having met all of its obligations despite the successive crises. The renewal of its concession in 2010 represented due recognition of its effective management and enabled the concession agreement itself to be readapted in line with the realities of the sector. New clauses provide for investment plans that may be adapted according to changing conditions. These give AÉRIA flexibility in the event of a drop in traffic or a need to react to developments within the aviation sector (changes in the type of aircraft, issues with airport security, etc.). The adaptability of the public-private partnership is a significant asset in the return to growth.

After ten years of political and economic crises, the Ivory Coast is back on the path to growth and expansion. As the country’s international gateway, the airport must support and reflect this growth and its modernisation must continue, with a focus on infrastructure development, expansion of its airline network and enhancement of safety and security.

Huge efforts are being deployed to grow national, regional and international air traffic. In 2015, the national carrier, Air Cote d’Ivoire, represented some 40% of traffic at Abidjan Airport. It mainly handles connecting flights; Abidjan is the hub (transfer point) providing access to and from West and Central Africa. Air France – the second largest carrier in volume terms – handles 16% of traffic. Air France/KLM has expanded its Paris-Abidjan service to seven flights per week, some of which use Airbus A380’s. In addition Corsair has officially announced the permanent resumption of four flights a week from Paris beginning in June 2016.

One of the main objectives of Abidjan Airport is to start a service to the United States and in 2015 the airport obtained security approval from the American authorities, a vital preliminary step for flights to or from the US. Moving forward, in 2016 airworthiness certification will be granted by ANAC, the national authority recognised by the International Civil Aviation Organization. Once these approvals are in place, AÉRIA will be operating to the same standards as Western international airports.

At present, while the situation is clearly improving, AÉRIA’s development remains constrained, particularly by very high airport taxes. In the competitive world of air transport, global airlines compare many different airports before opening a route, and flight taxes are a key factor in the selection process. AÉRIA directors recently met with the Ivory Coast Ministry of Transport in an effort to strike a balance acceptable to all parties. Shortly afterwards, the government made an official announcement in the Council of Ministers that there would be a reduction in the various taxes equivalent to EUR 18 per ticket.

AÉRIA has made a number of short-term term investments to ensure continuing infrastructure development. The 2013 priority was to upgrade its installations to be able to accommodate the Airbus A380. In 2015, EUR 4.5 million were invested in upgrading and renovating the international departure areas. Improvements will continue in 2016 with the replacement of the baggage conveyor and enlargement of the car parks.

Traffic forecasts are in line with the airport management’s objective of an estimated 2 million passengers a year by 2020 with an annual growth rate of about 5.7% in 2016-2020, rising to nearly 2.7 million by the end of the concession in 2029. Such growth will require further investment to expand capacity. Airside, more stands are needed to accommodate larger aircraft while landside the terminal building will have to be expanded. AÉRIA must also tailor its infrastructure to the requirements of the flag carrier, Air Côte d’Ivoire. Operating as an airline hub requires adaptation both on the airside and in the terminals. For example, facilitating passenger transfer from one aircraft to another requires careful flow management.

AÉRIA’s challenge is to continue to develop the airport via tailored investment plans without destabilising its finances. In total, AÉRIA has earmarked nearly EUR 100 million in investment – a significant part of which will be financed out of its own funds. Since all of these transformations are based on dynamic forecasts of the country’s economic development, this investment plan necessarily includes an element of risk.
Naturally, the Company is also investing heavily in its personnel. Having an international group with the stature of Egis as stakeholder gives AÉRIA access to know-how and industry best practices that help foster the professional expertise and people skills it needs. AÉRIA has also been running an ambitious training programme for several years to enhance its skillset and boost recognition and motivation amongst the teams.

The current objectives for Abidjan International Airport are to grow and diversify its airline network, enhance safety and security and expand its infrastructure. To “future-proof” its business, AÉRIA is working with the teams at Egis to plan for the airport’s modus operandi in 2025 when it will need to be able to handle more than 2.5 million passengers. As passenger behaviour and expectations evolve and the world becomes increasingly digitised, the infrastructure and services at the airport need to evolve accordingly and AÉRIA’s role as airport operator is to ensure that this happens.

Saving the Ganges: the vital changes needed in institutional and business models