The insurance sector sets its sights on Africa

Africa is home to 15% of the World’s population but generates barely 1.5% of global insurance premiums. Nevertheless, a number of indicators point to rapid future growth in the sector: the Continent’s economic momentum, the emergence of the African middle classes, and the development of new distribution channels, etc. This growth will be contingent on good governance of insurance businesses and the professionalism of their staff as well as service offerings that fit with local needs.

In the early 2000s, African economies were growing by between 4% and 7% a year and the Continent was being talked of as “the World’s second most important growth region after Asia and on a par with the Middle-East” (McKinsey). Naturally this was a boon for the insurance sector. However, the average African spends a mere USD 70 a year on insurance, compared to USD 1,000 in South Africa and USD 2,700 in Western Europe. Moreover, there are very high regional disparities across the Continent: with the exception of South Africa which has a market penetration rate of 14%, the ratio of insurance premiums to GDP is barely 1%. This lack of enthusiasm for insurance is down to several different factors: First, the very modest purchasing power of the populace1: before taking out insurance, people first have to eat and put a roof over their heads, look after their children’s needs, etc. This is in addition to the absence of an “insurance culture”, the fact that there is no mandatory insurance for mass risks, the absence of innovation and pricing regulations, and a sometimes haphazard approach to processing claims that promotes a negative perception of insurers. Consequently, only mandatory types of insurance (i.e., auto insurance, school insurance, or repatriation or medical insurance linked to visa applications, etc.) have been taken up by the more affluent sections of the population.

At the present time, Africa accounts for barely 1.5% of the global insurance market which generated USD 4,778 billion in 2014 (source: SIGMA- Swiss Re). The Continent has around 600 active insurance businesses in 54 countries (by way of comparison, Europe has nearly 5,000).

The region’s top ten markets generate more than 90% of premium income, particularly South Africa (75%2), followed by Morocco, Egypt, Nigeria and Kenya. In Africa’s other countries, insurance still has a long way to go. 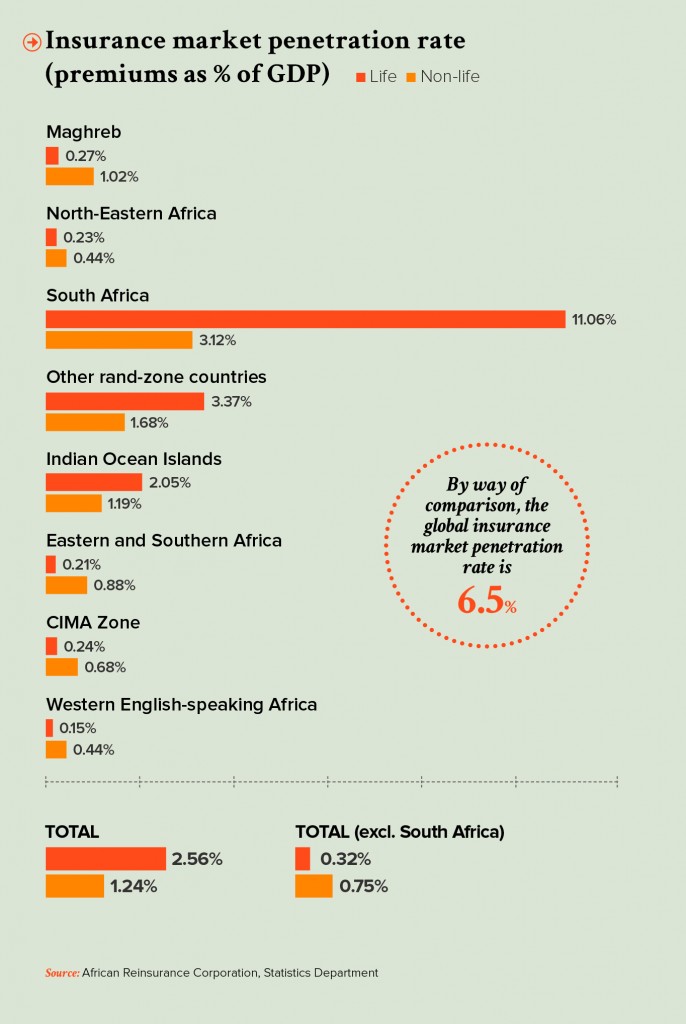 Despite Africa’s relatively small share of the global insurance market, a number of international brokers and major European insurers have moved into the region, attracted by healthy loss ratios due to African insurers’ relatively low exposure to major risks. Indeed, the combined ratio for the Continent as a whole is better than for developed markets (figure).

The African insurance market is mainly organised around brokers, insurance companies and reinsurers. Brokers in domestic markets focus mainly on individual risks, local SMEs and public and para-public sector business. 90% of corporate insurance business is handled by international brokers who have been advising their clients on investing in Africa for many years and they have set up insurance programmes with insurers present on the Continent. Some of these companies only do business on their own domestic markets while others with a more regional or international footprint are increasingly operating as part of networks and setting up subsidiaries or partnerships in a number of African countries. In the past few years, there has been a big increase in network-based insurers and this trend will probably accelerate in view of capital adequacy constraints imposed by the Regulator. Consequently, the number of domestic insurers will probably decline and those that survive will do so by marketing highly innovative products to niche markets.

Lastly, the heavyweight global reinsurers are very active in Africa alongside regional or national reinsurers as they are needed by the insurance companies to provide additional cover, particularly for major risks.

Although brokerage is still the most widely-used insurance distribution channel, notably for corporate business, other channels are also beginning to emerge, starting with bancassurance, i.e., the sale of insurance products through banking networks. For Africa as a whole, the market penetration rate is around 2%, however it rises to between 10% and 20% among bank customers. More and more individual risk products are being marketed via banking networks, both by the retail banks themselves and by microfinance organisations.

Phone networks are also an effective distribution channel on a Continent with a mobile phone penetration rate of 70% and it is precisely by using phone-based apps that micro-insurance could fulfil its huge potential (see the article by Frédéric Bouchet). Insurers are also leveraging social media as a distribution channel.

Between opportunities and obstacles

A number of indicators point to rapid growth in the African insurance sector, particularly in the individual risk segment. Aside from the Continent’s economic promise and demographic momentum3, the emergence of the African middle classes and the development of new distribution channels are a boon for the sector.

Regulations and regulators4 are increasingly apparent and directive in nature. They focus on oversight and the involvement of sector players in economic activity. In the last few years, industry regulators have required insurers to bolster their capital base with a view to increasing premium retention rates in domestic markets and on the Continent generally. Strict rules have also been drawn up forbidding the insurance of risks abroad and requiring prompt settlement of premiums. The Regulator is no longer merely concerned with the insurer’s solvency but also drafts guidelines on good governance (suitability of senior managers, internal control procedures, information systems, etc.).

However, if the African insurance sector is to make the most of these favourable conditions, a number of challenges need to be met. At government level, political stability is absolutely essential along with good governance – especially anti-corruption measures and judicial security. At insurer level, companies need to boost their professionalism, solvency and financial strength. Given that an insurer’s key resource is the quality of its employees, a big investment is needed in academic and on-the-job training. Insurers also need to be much better explainers and communicators if they wish to improve their image with the population as a whole5.

It is those companies that are able to innovate (in terms of both new products and distribution channels) that will gain an edge on the competition.

1 According to the World Bank’s most recent report, 388 million people – or 43% of the population of Sub-Saharan Africa – were living in extreme poverty in 2012.
2 This higher rate for South Africa is partially attributable to social insurance products developed by the private sector, a three-fold increase in the ranks of the middle classes over the past 10 years, popular trust in banks offering long-term savings products, and a high demand for protection due to widespread criminality and a large number of car accidents.
3 Africa is currently home to 15% of the World’s population, but this figure will rise to 25% in 2050 and 33% by 2100 (source: INED).
4 Public bodies with national or regional jurisdiction tasked with controlling and regulating insurance in one or several countries.
5 In Africa, the insurer is often seen as someone who collects premiums but is reluctant to pay claims.

SME access to financing: capacities matter as much as resources

Renewing the rules for an efficient financial system