Good links between ports and their hinterland is one of the key catalysts driving growth and opening up different regions of Africa. Rail and roads – with all their respective advantages – compete to provide the Continent with an infrastructure and forge links to its ports.

Historically, most of the PPP-type operating and lease concession arrangements for African rail networks were awarded from the late 1990s on. Since most of the Continent gained independence, the African rail system has suffered a gradual decline. Due to its inefficiency and failure to keep pace with customer expectations, rail was supplanted by road transport.

These developments were reflected in the ports in the removal of rail access to the wharf or to storage warehouses. When rail concessions were handed out, we realized that in certain ports – Tamatave (Madagascar) or Douala (Cameroon), for example – rail installations had simply disappeared from port infrastructure altogether. It was then necessary to negotiate with the port authorities to lay new tracks, and above all to connect rail with the new container terminals – which became possible around the 2000s.

Today, railways are once again a feature in African ports and although they are of secondary importance  in  some  places,  such  as  Lagos (Nigeria), they have now largely re-emerged to become a key component of contemporary port infrastructure. For example, in Gabon where road transport is underdeveloped due to a very poor road network, nearly 95% of goods between Libreville and Franceville are transported by rail.

RAIL AND ROAD: A LONG HISTORY OF DIRECT COMPETITION

A customer who imports a container these days wants to clear customs and get it delivered as quickly and as cheaply as possible. Obviously, road transport has the advantage of getting the container directly to the end customer, which rail cannot do. But railways can constitute a more effective solution for longer distances (of at least 250 kilometres) and are capable of harnessing 30- to 50-wagon port terminal facilities loaded up by freight forwarders based on a system of reservations. Once it has been loaded up, the train travels on to a dry port – or inland port – terminal where the containers are unloaded before continuing their journey by road.

Rail can actually provide greater freight security, especially for trans-border traffic between countries such as Cameroon, Chad and the Central African Republic: once a container has been loaded onto a wagon, it generally stays there until it arrives at its final destination and container trains are rarely raided. A container sent by road may be assigned a specific route but the driver may go another way, get stopped for a variety of different reasons, and have to pay unplanned “route charges”. Lastly, rail is more eco-friendly and cost effective: trains can move between 2,000 and 3,000 tonnes whereas a truck can transport one, or at most two containers.

Over the past 10 years, Africa has made considerable strides in simplifying administrative procedures.

As major African ports compete to attract traffic, cutting red tape has become a key issue. With growing containerisation over the past 10 years, Africa has made considerable strides in simplifying administrative procedures. Containers enjoy end-to-end traceability as both goods and their weight are clearly identified. Consequently, freight forwarders have all of the documentation needed to initiate customs clearance procedures, even before the ship arrives in port.

This gives rail transport an edge over road transport in terms of cutting down container dwell time and preventing bottlenecks in port. Indeed, it takes considerably longer to scan 30 to 50 trucks standing in line, each carrying one or two containers, than it does to scan through a single rake of loaded wagons. Let us take the example of the port of Tamatave in Madagascar where containers are forwarded by train under a “suspensive customs regime” whereby clearance takes place at destination, 400 km further on. Compared with road transport, this cuts down in-port dwell time to two / three days maximum, before the goods leave for Antananarivo where they clear customs.

Containerisation has become an essential feature of African maritime trade: for rail transport alone, nearly 90% of goods are now moved by container, from their port of arrival towards the interior.

Only construction machinery, heavy machinery and equipment and certain bulk commodities – such as cement or wheat that is stored in silos before being gradually dispatched to meet the needs of major urban centres in the hinterland – cannot be transported by container. Bulky goods and commodities are only sent by rail using specially-adapted wagons if there is pre-existing demand and the required specific investments have already been made.

The ability of seaports to serve major urban centres as well as landlocked regions in the interior is crucial and rail can play a pivotal role here because for countries without a seaboard, like Mali or Burkina Faso, having a reliable neighbour with an efficient port and rail transport system can only be a good thing both in terms of cost and time. 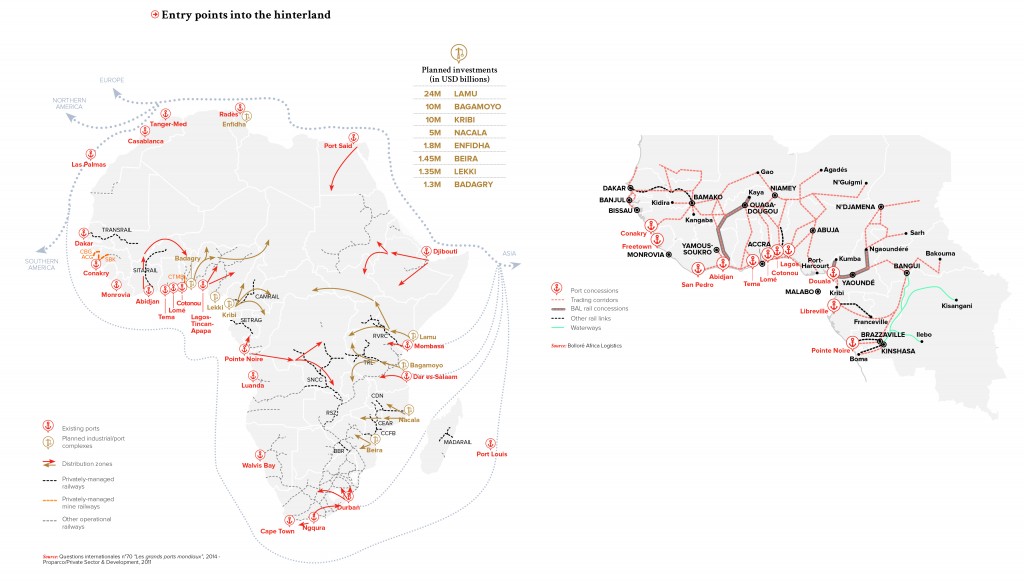 However, opportunities to link ports by rail really do depend on where they lie in relation to major centres of demand. If we take Cameroon where the port of Douala is quite close to the capital Yaoundé, rail transportation between the port and the capital city is marginal compared to road transportation whereas it is far greater for longer distances within the hinterland (in Chad and the Central African Republic, for example). In Gabon, the main centre of demand is right next to the port in Libreville, so the city does not depend on rail-based transport, however, the hinterland and the city of Franceville are all served by container trains. In DRC, the major urban demand centre of Lubumbashi in the province of Katanga is served by container traffic that either comes up through South African, Namibian or Mozambican ports, or in through the “national way” which involves moving goods along the Congo and Kasaï rivers as far as Ilebo where railway then takes over.

WHAT DOES THE FUTURE HOLD FOR RAIL-BASED TRANSPORT IN AFRICA?

All port development strategies in Africa now generally include a rail-based component. In Ethiopia, a new line was commissioned in late 2016 to link Addis Ababa to the port of Djibouti. In Angola, the port of Lobito has been completely redeveloped: it now includes a brand new rail terminal linking up to the newly-rebuilt Benguela railway that goes all the way to the DRC. Kenya and Uganda have a joint railway line that works very well.

However, despite such momentum, African railways still faces huge challenges and building new infrastructure and investing in new equipment are only part of the improvements that need to be made. The future of African rail-based transport is also contingent on an effective interface between port and rail operators, which in turn depends on the quality of customs clearance services provided by freight forwarders. Development will also depend on the ability of rail networks to serve a wider customer base so that they do not become captive to a small number of port operators who monopolise transport capacities.