Legal instruments to support the development of African ports

Governed chiefly by concession and permit agreements, the legal instruments underpinning public-private partnerships (PPP) in the African port sector are often inappropriate. These need to change in order to meet private operators’ expectations with regard to stability and security issues. More stringent application of competition regulations and greater flexibility in legislation on public land ownership would undoubtedly encourage private investment.

Development policies still consider maritime ports as essential transport infrastructure vital to the economic emergence of African countries today (Daudet, 2014). The reason is simple: over 80% of Africa’s foreign trade passes through a port — and this applies even to countries with no seaboard.

This sector is undergoing massive changes. A new entrepreneurial approach to governance is being established in maritime ports in Africa and the port authorities are starting to base their development strategies on efficient facilities, commercial responsiveness, results-driven culture and transparent management. Increasingly, maritime ports in Africa are not only accommodating the requirements of multimodal transport operators but are also inviting them to become technical, economic and financial partners. For example, the Tanger-Med port authority along with those in Abidjan, Kribi, Dakar, Conakry, Pointe-Noire and San Pedro have now started to outsource their handling, storage, and, more broadly, full terminal operation to private operators.

The public-private partnerships which handle such outsourcing operations are founded on an array of legal instruments. However, business arrangements in Africa are not always legally secured, ¹ even though this is an essential prerequisite to the economic development of the continent’s ports. Moreover, the legal instruments underpinning PPP need to be adapted to today’s new legal, economic and political challenges while reflecting the ongoing modernisation across the sector.

CONCESSION AND PERMIT: THE LEGAL INSTRUMENTS USED IN PPP

The traditional legal instruments that have helped to make a success of PPP in African ports are largely governed by concession agreements and authorisations. A port concession is an overall outsourcing contract in order to occupy and operate a domain within the public port area. Concessions are granted to private partners, generally for the operation of a port terminal or public port installations. The signatory parties to an operating agreement for a port terminal often refer to a “Build, Operate, Transfer” (BOT) type of arrangement, which allows an entire public port service to be outsourced, from project design through project financing and construction to project operation. This type of agreement allows an alignment of the expectations of the port authorities (seeking to outsource overall operations) with those of the private operators (seeking to make a good return on their investments) and those of institutional funders seeking to leverage the dynamism of their private partners for the public good. As for concession agreements for public equipment, they seek to outsource the operation of warehouses, oil storage facilities, berths, cereal silos etc. to a private partner. The private partner most often undertakes some building works, even on a small scale, and so privately occupies public port domain. Such agreements are described as a joint public service delegation combined with a property concession.

The authorisation scheme exists alongside the concession scheme. Authorisation to occupy public port domain must be obtained from the port authority before such domain is used for private purposes. Depending on the circumstances, the port authorities may grant a temporary  permit, an official authorisation to occupy public domain, or an authorisation for private operations with a public service obligation. As a rule, port authorities grant simple temporary permits for short-term private occupancies which do not require significant investment. This would be the case, for example, with catering services for dock workers on public port property. However, where private occupancy requires high capital investment and major works to be carried out, it may be necessary to grant an official permit to occupy public domain, a property concession or a roadway concession. These are long-term concessions whereby the port authority provides the operator with some guarantee of stability.

The legal instruments underpinning PPP need to be adapted to today’s new challenges while reflecting the ongoing modernisation across the sector.

These  legal  instruments  are  the  traditional  PPP tools. They enable the refurbishment of port areas and the modernisation of public services, thereby helping African ports to grow and develop and so become profitable and efficient. However, such legal instruments need to be adapted to the new challenges facing public private partnerships.

THE NEED FOR LEGAL INSTRUMENTS TO EVOLVE

The legal characterisation of the traditional instruments that have enabled PPP to succeed may sometimes be inappropriate. An example of this is the concession for the second container terminal in the port of Abidjan. The term used — a “public service concession” — conflicts with international standards for modern port management. Handling operations were indeed a public service in the past since they used public equipment but international operators offer nowadays identical services with private equipment. The choice made by the Abidjan port authority therefore runs counter to international practices in the operation of port terminals.

It  should  also  be  noted  that  authorisations  offering unsecured occupancy of public port domain are hardly conducive to partnerships with the private sector. The legal philosophy surrounding African ports considers the precarious nature of the private occupancy of public port domain to be one of the main pillars in the system of public ownership. In other words, the port authority can terminate private occupancy of publicly owned domain at any given moment by unilateral decision, even where the occupant is not at fault. This would appear to be irreconcilable with a spirit of partnership based on solid legal guarantees for investors.

Furthermore, practices are changing. In Côte d’Ivoire, for example, private investors have real rights enabling them to provide their lenders with guarantees. Their ownership of the buildings they construct on public port domain is recognised. Despite such progress however, port operators consider their protection on publicly-owned property remains very precarious given the large sums of capital they are seeking to invest.

RE-THINKING  THE  RELATIONSHIP  BETWEEN  AUTHORITIES  AND  PRIVATE OPERATORS

Many  economic  reports  (see,  for  example,  MLTC/CATRAM, 2013) continue to argue that the emergence of African countries depends on the development of maritime ports. The relationship between the authorities and port operators needs to change, given the increasingly important role of the private sector in port operation and management. In fact, “occupancy of publicly-owned property is not in the interests of the occupants alone. The public authority also benefits from the added value they bring along with their investments and the activities they exercise there. The benefits are mutual.”  (Rézenthel, 2001). 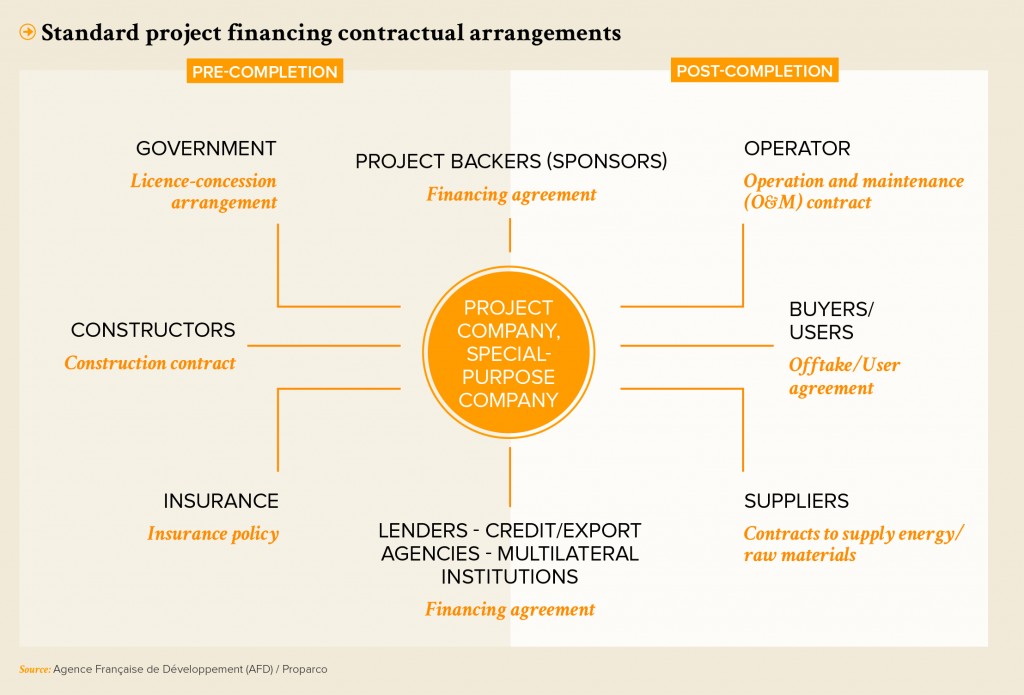 Modernising the management of African ports must therefore necessarily entail a change in the legal instruments underpinning public-private partnerships. “These contracts must be subject to a balanced, closely-regulated regime and to specifications that clearly stipulate each party’s rights and obligations.” (Ndendé, 2013). Competition regulations must be fully applied in the selection of private operators, and the lack of security that surrounds the authorisations for private occupancy of publicly-owned property in numerous African ports must be called into question.

Modernising the management of African ports must necessarily entail a change in the legal instruments underpinning public-private partnerships.

Specifically, three recommendations can be made here. Firstly, the law governing publicly-owned domain needs to be adapted to the specific context of African economies in order to encourage their participation in global maritime trade. Some publicly-owned domain used primarily for economic purposes (such as maritime ports) should enjoy a more flexible and dynamic legal protection in favour of private partners. These domains should be exempt from rules that benefit to port authorities and penalise private investors for no good legal reason. Besides, nothing prevents African port authorities from offering sui generis contracts tailored to the needs of their port areas in compliance with rules for public domain. Finally, port authorities could declassify plots of public domain for the purpose of allowing industrial facilities. Such agreements could take the form of private-law contracts, like construction leases.

1 As illustrated, for example, by the Conakry container terminal concession — initially granted to Getma International and terminated by decree of the President of the Republic of Guinea on 8 March 2011.