By investing in plant renovation and new products, restructuring its distribution system and deploying a local milk collection network, the Malagasy agri-food operator Socolait has managed to contend with the difficulties arising from the 2009 institutional crisis. The strategic decisions taken, together with a counter-cyclical investment strategy, are now beginning to pay off handsomely.

Socolait is one of Madagascar’s flagship companies and its 1.2 hectare plant at Antsirabe, 160 kilometres from the capital Antananarivo, has been keeping Southern Africa supplied with sweet concentrated milk and infant flour – its two core products – since it was built by Nestlé in 1975. After it was nationalised in 1981, the company changed hands twice before being acquired by Adenia in 2012. With quality production facilities and a solid, well-known brand, it had begun to develop a range of fresh products which, although they were only of marginal importance in terms of total sales, already had very high growth potential. Adenia and the company’s own management planned to harness these competitive advantages to turn Socolait into Madagascar’s undisputed No. 1 dairy product producer.

But Socolait also had to deal with an economic crisis and the fallout from regime change in 2009 which culminated in the “High Transitional Authority”. Following the suspension of international aid and economic partnerships (SADC, AGOA, etc.), domestic purchasing power collapsed. In late 2013, Madagascar was one of the poorest countries on the planet with 92% of its 25 million people living below the poverty line, GDP per capita of USD 462, and – paradoxically – one of the world’s lowest levels of international aid (see diagrams). 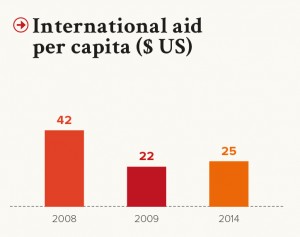 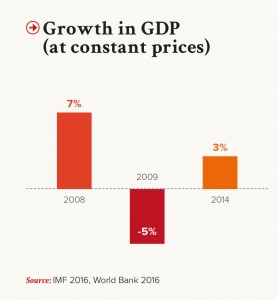 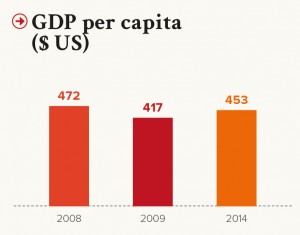 After the recovery, “counter-cyclical” investment

By 2012, the company had recruited a complete management team and deployed a new strategy: major renovation work was carried out to bring the factory into line with international food safety standards and set up the cold chain needed to develop a range of fresh products, including one of the national favourites, yoghurt. The company also launched the “Milk Road” project to develop a fresh milk collection network involving 1,400 farmers in the Vakinankaratra region in which Antsirabe is located. The project resurrected a local network that had been abandoned in 2009 following the closure of Tiko, the group owned by Madagascar’s former President. In addition to providing these farmers with a stable income, this project enabled Socolait to reduce its exposure to currency fluctuations and dependence on imported milk powder which they had been using practically exclusively in their products.

The company also enhanced the recipes and packaging of several products and launched a number of new ones (cheeses, new product formats, etc.) and completed the diversification of its customer base. A major promotional campaign was initiated. For the first time ever, Socolait used direct marketing – featuring TV and radio ads – to boost its brand image. Distribution, which had been concentrated among a handful of wholesalers, also became increasingly direct as the company began delivering directly to retailers, hotels/restaurants and even to local authorities. Socolait identified a small number of wholesalers as potential partners who they could use to distribute their products over the “last few kilometres” of the food chain.

Nevertheless, purchasing power had been severely weakened by the crisis and these efforts took time to pay off. A plethora of low-cost imports – mostly from Asia – eagerly taken up by a population on the lookout for cheap goods and facilitated by a much weakened central government began competing directly with Socolait’s concentrated milk, which had previously had a virtual monopoly on the domestic market. Sales of concentrated milk, which accounted for 65% of the company’s sales in 2011, plunged by 25% a year over the two years that followed the acquisition. Unfortunately for the Company, this drop was not offset by the increase in sales of fresh products which grew by 15% a year thanks to Socolait’s efforts in this segment.

Even as thousands of Malagasy people were losing their jobs, jeopardising the purchasing power of entire families, Socolait doubled its workforce and pumped over €2 million in “counter-cyclical” investments into its plant and facilities in anticipation of future growth.

Decisions in support of Socolait’s development

2014 was a major turning point for Socolait. In late 2013, relatively trouble-free elections held out hope of a gradual return to stronger government while key strategic decisions made within the company led to renewed growth after years of decline.

In Madagascar […] distribution remains one of the major challenges for local businesses. 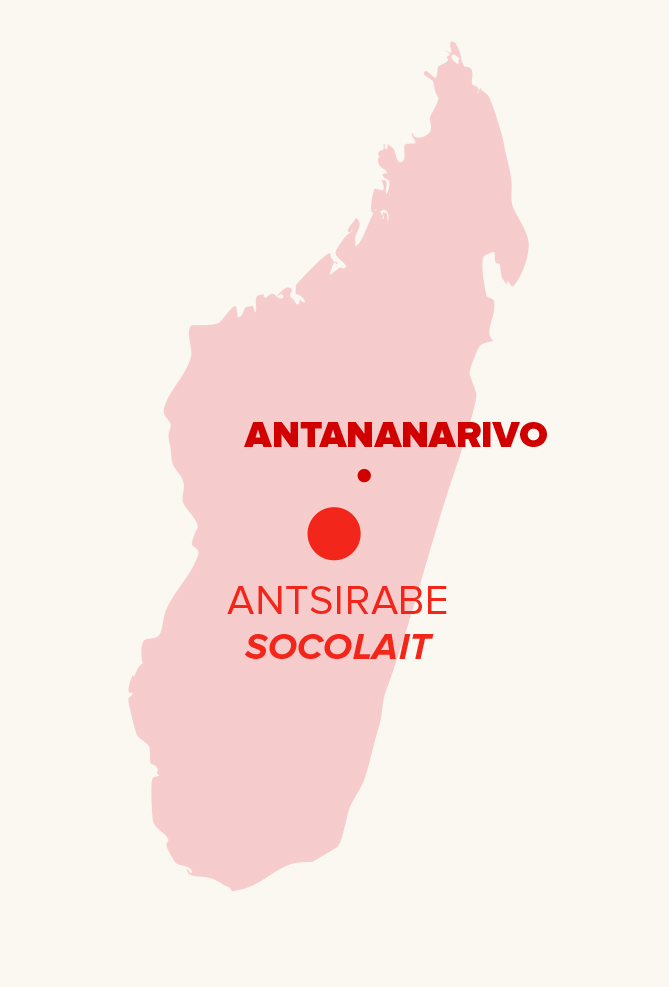 In the first-quarter of 2014, Socolait, cut the price of its yoghurts by 25% and doubled its sales in six months. This decision had a “halo effect” on the entire fresh product range which grew by 5% a month over the next three years. New distribution solutions were also developed. Madagascar’s road infrastructure, which was basic to begin with, is deteriorating even further from a lack of investment and distribution remains one of the major challenges for local businesses. Socolait opened a number of distribution platforms both in the capital and the main towns which it operates either directly or with local operators. It also began daily delivery rounds to retailers whose cash constraints and limited ability to store fresh produce had been limiting the value of each unit purchased. These models helped to restore Socolait’s control over the distribution of its products: it now distributes 70% of these directly or semi-directly, compared with a mere 25% in 2013. Buoyed by these investments in its distribution network, sales of milk have gradually climbed back to what they were before the political crisis.

As sales began to take off, Socolait continued to enhance its production processes and it obtained HACCP certification ¹ in 2014, followed by ISO 22000 ² certification in 2016, making it the only business in the Indian Ocean with two food security labels. At the same time, the company is looking to the long term. It continues to develop its fresh milk collection network which it sees as a solid competitive advantage and protection against fluctuations in the price of powdered milk. Local milk now comprises Socolait’s main raw material.

Lastly, Socolait has kept up its marketing efforts and backed up advertising and regular roadshows with a major point-of-sale rebranding campaign. Between 2014 and 2016, Socolait’s sales grew by 30% a year. At the same time, Madagascar returned to the international fold. Although poverty is still alarmingly high, the organisation of a number of international summits (e.g. meetings of French-speaking countries and the SADC) and renewed dialogue on international aid have paved the way for a number of construction projects and the reopening of factories (e.g., textiles). Certain administrative functions, notably customs, are also working better. And purchasing power has improved, as borne out by the 2016 figures for Madagascar’s major consumer businesses.

A strategy validated by results

Socolait now has a well-balanced range of products, produced in a renovated factory and distributed through a network that covers a large part of the island. It has consolidated its market share for its core products and become one of the island’s market leaders for yoghurt. Obviously, Socolait continues to optimise its product range and invest in its factory, its collection and distribution networks and its marketing campaigns.

The early months of 2017 have been promising: sales have increased by nearly 40% despite growing competition, especially in the yoghurt market. Now that the distribution network is firmly established, the company is looking at a number of projects to extend the product range. An infant flour-based yoghurt was launched in Q1 2017 and new product launches are in the pipeline for the remainder of the year.

Madagascar’s economy is starting to grow again, albeit slowly, and its GDP is expected to increase by 4.5% in 2017

The development of the product range, enhanced infrastructure and deployment of an effective distribution network have given Socolait better visibility over the future and provided it with a solid base and fresh resilience. Socolait is aware of its commitments to the people of Madagascar and the challenges they face: the company is active in a private sector humanitarian platform and it has set up the Soco’Tsiky programme to partner a number of associations that work with small children. Moreover, its commitment to the country’s farmers through its local milk collection network also make it a key stakeholder in improving the social situation on the island. Madagascar’s economy is starting to grow again, albeit slowly, and its GDP is expected to increase by 4.5% in 2017 (IMF, 2017). Socolait, together with the other Malagasy companies that proved their resilience during the crisis, are poised to support this growth over the coming years and contribute to making Madagascar a more prosperous country.

Footnotes:
¹HACCP (Hazard Analysis Critical Control Point) is a food safety management system.
²ISO 22000 is an international food safety standard applicable to all companies that do business in the agri-food sector.

Financing and TA: fertile ground for the growth of agricultural companies in Africa