Africa will have two billion inhabitants by 2050, i.e. a quarter of the world’s population. Half of them will be aged between 15 and 30. The continent will need to address a number of challenges, including climate and energy challenges. In 2016, out of the 1.06 billion people who did not have access to electricity, over half (588 million) lived in Sub-Saharan Africa (IEA, 2017). This figure could reach 645 million by 2030.

Consequently, if we expect to resolve global energy problems, specific action is required in Africa. There is a need to increase the energy supply, a prerequisite for its development, without exacerbating climate change, which already seriously affects the continent. Achieving this requires both developing renewable energies and deploying energy efficiency solutions.

Working for the development of a sustainable economy in Africa by promoting innovation also allows Schneider Electric to position itself in an expanding market. By supporting local entrepreneurs and taking part in the development of innovative projects, the Group is seeking to be at the forefront of social and technological innovation, while contributing to building new economic models. Schneider Electric’s objectives in Africa are implemented in the context of its energy access program, which comprises three complementary areas. 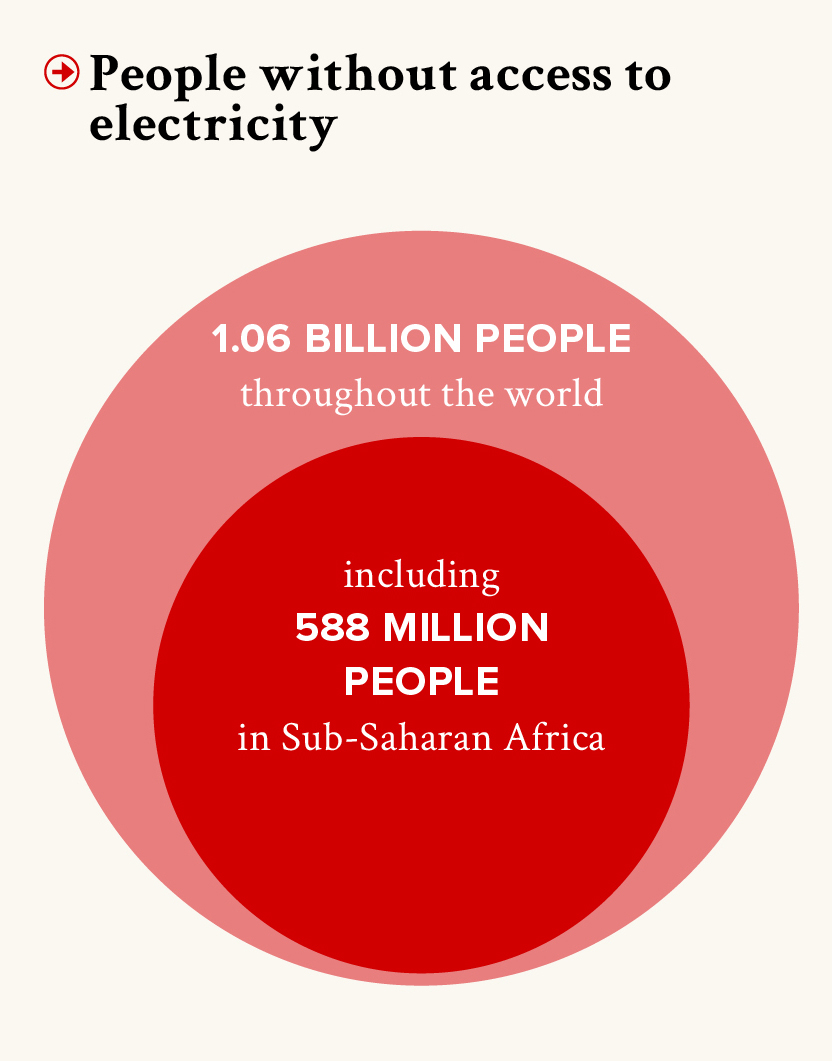 The development of this commercial part of Schneider’s activities in Africa is based on its self-financing capacity. Trade margins are calculated to allow all the costs to be covered, while providing consumers with an affordable price. This “inclusive business” component also contributes to the deployment of innovations thanks to the payment terms it grants, which allow pilot projects to be prefinanced or distribution grids to be created.

To support innovation in Africa, Schneider Electric initially created impact financing tools. In 2009, the Group set up one of the first impact funds led by an industrial group, Schneider Electric Energy Access (SEEA). In 2015, it continued this policy with the creation of Energy Access Ventures (EAV), the first impact fund including an industrial group and development banks (EIB, CDC Group, PROPARCO/FFEM, OFID, and recently joined by FMO).

The SEEA fund supports companies that fight against the energy divide in Europe, Africa, and now in Asia. This EUR 7m vehicle is today supporting eleven innovative companies, generally in the start-up phase, and provides them with financial support and technical assistance to allow them to successfully scale up. The EAV fund, for its part, is specialized in access to electricity in Sub-Saharan Africa with much more substantial resources for operations (EUR 75m), allowing it to contribute to the development of the six companies supported since it was set up.
While social innovation determines the choice of the projects supported by the fund, their economic dimension is, of course, taken into account. For example, SEEA was one of the first investors in Fenix International (box below). The fund also supports technological innovation. The funded companies have spearheaded the deployment of Pay-As-You-Go models, for instance. A number of start-ups are seeking to exploit these innovations. For example, cooperation between telecommunications companies and energy start-ups today allows mobile payments, microinsurance and access to weather forecasts for farmers.

This company is today one of the main players on the domestic solar systems market in Uganda. It is currently expanding its business to Zambia and Côte d’Ivoire. Fenix has a significant social impact. For example, over 100,000 solar systems have been sold and benefit one million people, which has allowed them to “avoid” USD 8.8m of spending. With the takeover by Engie, Fenix is going to be able to continue its development. The SEEA fund has played the role of an “accelerator” for this company by investing right at the start of the project.

A training program completes the strategy to support innovation in Africa. While only three million young Africans a year find a job (out of 10 to 12 million who enter the job market every year), activities in the energy sector offer them stable opportunities.

Consequently, to address the current lack of resources and technical skills at local level, the Schneider Electric Foundation supports actors in vocational training for energy activities and entrepreneurship: marketing, sizing, installation, maintenance, operation of electrical installations. Over 140,000 people have been trained in electricity activities and 950 entrepreneurs have been supported since the program was set up – the objective for 2025 is to reach one million people trained and 10,000 entrepreneurs supported.

Finally, the local reinvestment of financial flows needs to be promoted. Today, the financial flows from developing countries which are directed towards industrialized countries far exceed the amounts earmarked for development assistance.

INNOVATION IN AFRICA: WHAT PROSPECTS?

To strengthen innovation in Africa, beyond the support for training and the action of the impact funds, Schneider Electric promotes new strategies and new ways of working. For example, if energy players located their production in Africa rather than in China, the continent would have new sources of income, which would strengthen its autonomy. Indeed, the sustainable development of Africa necessarily requires its empowerment.

Furthermore, priority needs to be given to social entrepreneurship (where economic efficiency is at the service of a social mission), impact investment (where both financial and social returns are sought) and training, so that local expertise can take ownership of technological innovations.

Finally, the local reinvestment of financial flows needs to be promoted. Today, the financial flows from developing countries which are directed towards industrialized countries far exceed the amounts earmarked for development assistance. Since 1980, the equivalent of GDP in the USA – i.e. USD 16.3bn (The Guardian, 2017) – has circulated from the South to the North and the financial interest related to the debts of South countries stands at USD 200bn a year. The fact that the investments made by countries in the North are profitable is not called into question, but certain reforms could, nevertheless, reestablish a more equitable balance for Africa, by promoting the local reinvestment of financial flows. Indeed, financing for innovation in Africa – a need given the challenges mentioned above – should also be financing for innovation for Africa

Innovative responses to Covid-19 for private sector recovery in Africa