Despite having one of the highest levels of women entrepreneurs in the world, the economic potential of women in Africa remains undervalued. This is in particular due to a range of financing that does not necessarily meet actual needs or structures that remain inadequate. Yet by working on these two aspects, it is possible to make a significant contribution to women’s empowerment and the reduction of gender inequalities.

Africa is the flagship continent for women’s entrepreneurship, with the highest proportion of women entrepreneurs in the world (24%).1 Yet issues related to gender disparities cost Sub-Saharan Africa some USD 95bn a year.2 Beyond entrepreneurship, it is clear that an optimal participation of women in Africa’s economy generates more added value, especially in the field of business management. For example, African companies in the top quartile for women’s representation in their executive committees achieve better financial performance. This performance is  shown by a gross operating surplus (GOS) 14% above average.3

It has also been proven that leadership by women managers is the most suited to fair decision-making. They are thought to be more responsive, delegate more and manage conflicts better. In addition, women in companies are more likely than men to work together and cooperate to reach a consensus.4 Finally, they invest more in society than their male counterparts: for example, in developing countries, women spend 90% of their incomes on the household’s education, health and food, against 30 to 40% for men.5

FINANCING DOES NOT MATCH NEEDS

Despite all these facts, the economic potential of women remains largely untapped. For example, in Senegal, companies run by women account for just 32.8% of the economic fabric. Over 99% of them have a sole proprietorship, microenterprise or small business.6 Access to sustainable and appropriate financing is the main barrier to the development of strong businesses led by women.

In developing countries, there is an annual credit gap of some USD 320bn for SMEs led by women.7 Senegal is not an exception: only 3.5% of women entrepreneurs who borrow money do so from financial institutions,8 as existing financial products do not match the needs of the businesses they run. The financing conditions of commercial banks lack diversification and are mainly confined to short and medium-term loans. Furthermore, constraints related to guarantees automatically limit women, who do not generally hold land titles or assets to guarantee their loans. Microfinance and mesofinance institutions largely support women’s projects, but the amounts invested limit the long-term growth prospects. Finally, there are private equity funds that offer more prospects for sustainable growth. However, the investments put up by these funds are much higher than the needs of small-scale businesses, meaning nearly all the businesses run by women. All these factors explain why 43.9% of Senegalese women entrepreneurs who borrow do so from their families,9 which explains the barrier to the growth of businesses run by women.

The economic potential of women remains largely untapped. For example, in Senegal, companies run by women account for just  32.8% of the economic fabric.

AN INVESTMENT FUND DESIGNED BY AND FOR WOMEN

It is in this context in Senegal, and more generally in West Africa, that the Women’s Investment Club (WIC) Senegal led by four Senegalese women came into being. Its objective is to extend the range of financing accessible to businesses run by women in order to support inclusive economic development in French-speaking West Africa. It was launched in 2016, following a year of reflection on the best support products, and was initially established as an investment club to mobilize and grow the savings of women from diverse backgrounds who want to invest in women’s entrepreneurship. The mission of this investment vehicle is to promote the role of women in the national economy by giving them the possibility of investing. The club currently has 83 women who have mobilized over USD 1m of savings, which have gradually been built up since March 2016 and invested in the Regional Stock Exchange (BRVM).

Setting up this type of initiative is not a bar rier-free path, in particular due to the regulatory gap in the subregion which holds back investment activities. In Senegal, Teranga Capital was the first fund based in the subregion. It took almost two years to set up, following strong lobbying of the competent authorities

WIC is based on the tontines that everyone in Senegal knows, whatever the level of income, education or business sector. The savings are community-based, with a fixed amount set aside regularly every month. The model is slightly different as it includes an investment objective overseen by one or several modern financial platforms. For example, the funds mobilized are managed by a financial intermediary, CGF Bourse, and a gradual approach is taken to strengthen the financial education of women members. The aim is to position them as actors and not spectators in financing the national economy at all levels: stock market investment, angel investment, venture capital investment, etc. The long-term objective is to set up a private equity fund.

The launch of WIC Côte d’Ivoire in 2018 is also part of a subregional approach and is in line with a move towards a future African network, which would support the ambition of companies on the continent to develop and represent a new generation of top companies headed by women. Other African countries are working to set up associations that would join the network. They currently benefit from the sharing of experience and all the documentation of WIC Senegal, with the aim of providing, more extensive technical assistance for these countries.

In Senegal, the first investment fund by women was launched in March 2019 thanks to the savings collected to date. It has been designed to meet the actual needs of women entrepreneurs in West Africa. WIC Capital aims to finance and support Senegalese and Ivorian high-potential companies that meet well-defined “gender” criteria: companies set up by women, with a minimum of 50% owned by women, or which have a managerial team with a majority of women. The fund invests amounts tailored to the size of companies, i.e. FCFA 25m to FCFA 125m (EUR 38,100 to EUR 190,500), with the aim of building “top companies”.

In addition to financing, it also involves supporting the businesses run by women via a support and technical assistance program. WIC Académie, which is currently being structured with the launch set for the first quarter of 2020. It intends to capitalize on the expertise of WIC members to provide individual support to companies that meet well-defined gender criteria.

PROMOTING THE CREATION OF INNOVATIVE STRUCTURES

Setting up this type of initiative is not a barrier-free path, in particular due to the regulatory gap in the subregion which holds back investment activities. In Senegal, Teranga Capital was the first fund based in the subregion. It took almost two years to set up, following strong lobbying of the competents authorities. The creation of WIC Capital had to go through an equally complex process which also took time. The fund is currently incorporated as a simplified joint stock company pending the creation of an appropriate legal structure for investment companies in the subregion. It is by no means waiting passively, as the structure has undertaken advocacy activities for the development of a regulatory framework concerning the entire WAEMU (West African Economic and Monetary Union) region, providing more incentives for entrepreneurship and investment. The aim of this advocacy is to promote the creation of innovative structures, adapted to the realities of our economies and societies, without which the development of the subregion could not be sustainable.

It is important that all the players in the subregion, both public and private, join in with this reflection. Gender is the gateway of WIC, but a strong mobilization by all the players, without exception, for common reflection is essential. It involves transforming the framework for setting up financing mechanisms based on international good practices, but also giving free rein to new and properly regulated models made by and for the local context.
WOMEN’S. 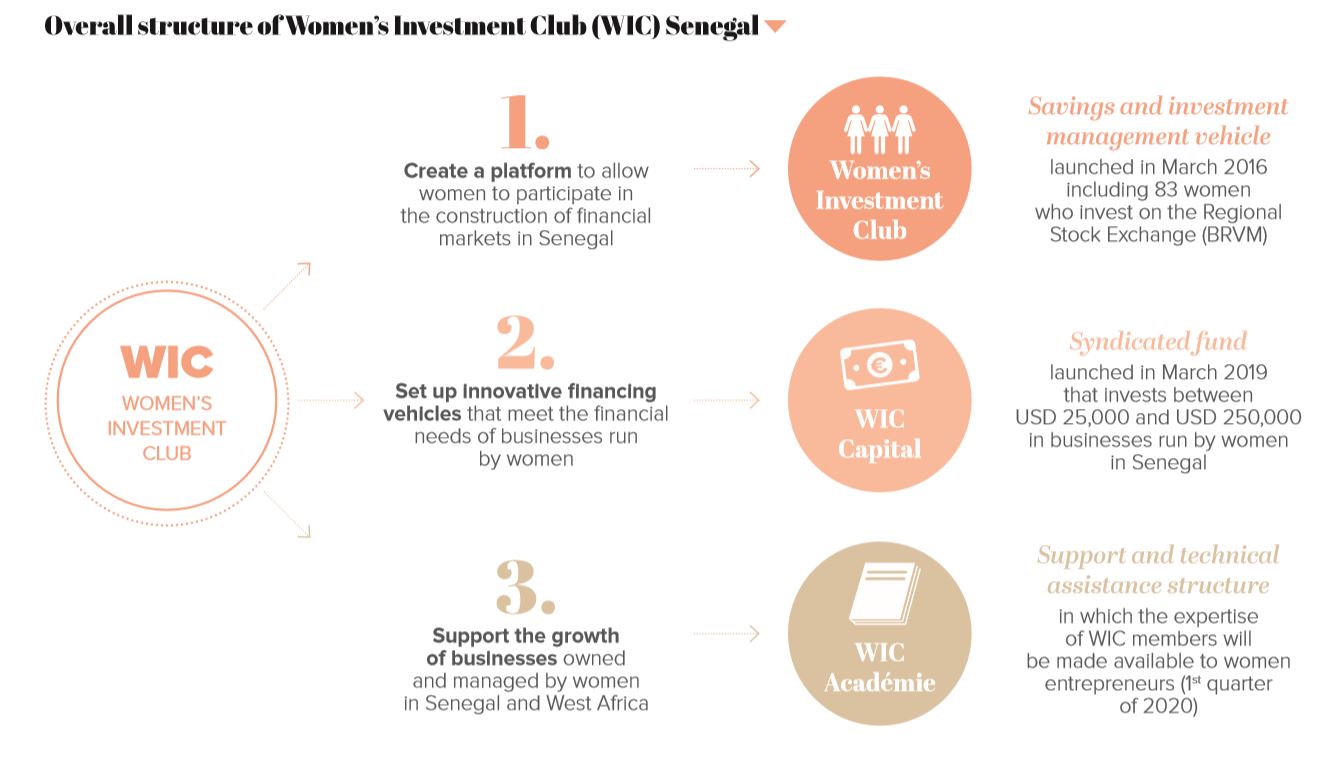 Technical assistance: the outlook for a strategic tool for development finance