When studying industrial development dynamics and their impacts on the economy worldwide, the Asian case is an obvious example. Huge investments in the manufacturing sector have brought about rapid structural changes in Asian economies more than policies for opening up. Through the prism of Asia, Marc Lautier and Jean-Raphaël Chaponnière take a look at the impact of industrial growth on economic development.

Since the catching-up of Japan, the take-off of the “new industrial countries” (NICs) and the emergence of Southeast Asia and China, Asia’s development has been shaking up the structures of the world economy. It is the main change to have occurred in the developing world over the last fifty years. This tidal wave, which has pulled almost half of the world’s population out of poverty, is often presented as a series of cyclical or even “miraculous” episodes. However, Asia is not simply a series of of exceptions but a reference for development economics, and the dynamic of industrialization are at the forefront of these processes.

Yet at the time of independence, Asia did not look as if it was on track for development and “Asia-pessimism” dominated. In 1960, South Korea was poorer than Ghana and in Seoul, American advisors despaired over its future. In 1964, an economic journalist concluded in his analysis: “Korea is a very poor nation and a series of miracles, as well as good judgement, and a lot of work will be necessary to give this country a viable economy.”1 Per capita income in Taiwan was lower than in Brazil and four times lower than in Argentina; Hong Kong and Singapore were barely richer. In this decade, these four economies gradually entered into unprecedented growth dynamics: in less than a generation (1960-1980), there was a four- fold increase in per capita income. The growth was even more spectacular than in Japan and gathered pace during the 1980s, which were regarded as a (first) lost decade in Latin America and Africa. As the 1990s approached, Taiwan and South Korea achieved the fastest economic development in history! The spread of growth continued in Asia in countries that are not isolationist and, in the 1980s, was marked by the emergence of Indonesia, Malaysia and Thailand, then during the following two decades by the growth of China and Vietnam. Over the last three decades, growth has been almost three times more rapid in East Asia than in Latin America or Sub-Saharan Africa. It has been combined with an improvement in human development indicators, which are now among the highest in the developing world.

GROWTH AND DYNAMISM OF INDUSTRIES IN ASIA

The region’s dynamism caused surprise for a long time. It was not foreseen by the experts and contradicted most of their forecasts. This led to a lot of confusion in the interpretations. Indeed, these take-offs shake up the traditional paradigms, both Marxist (the inconceivable development of the periphery) and orthodox, which foresee a bright future for major countries with a wealth of raw materials, then for countries whose “governance” and institutions are the most similar to those in the USA. This embarrassment accounts for the insistence on the singularity, the exceptional or even cyclical nature of the experiences of rapid growth in Asia, which is shown by the addiction to the term “miracle”. Indeed, following the Japanese post-war “miracle”, reference is made to the “miracles” of Korea, Taiwan and Singapore, then of East Asia in general, in a World Bank publication of the same name (1993), which, however, does not yet include China’s take-off! Miracles are rare and inexplicable events. They are not reproducible and it is difficult to learn lessons from them, for example, in terms of economic policy.

GROWTH AND DYNAMISMOver the last three decades, growth has been almost three times more rapid in East Asia than in Latin America or Sub- Saharan Africa. It has been combined with an improvement in human development indicators.OF INDUSTRIES IN ASIA

Yet these dynamics have the same driver and use similar recipes. The development of poor East Asian countries is based on the expansion of investments, production and exports in the manufacturing sector. From a comparative perspective, East Asian economies stand out for their rapid industrialization and strong industrial diversification. Back in the 1990s, the industrial development of Singapore, which was stronger than the USA (the world industry leader at the time), was even more rapid than in Korea. In the 1970s, Malaysia and Thailand were as non-industrialized as North Africa, but have now overtaken Brazil and Argentina, which were initially much more advanced. Industrial production is also taking off in Indonesia, Viet- nam and Cambodia. In the early 1990s, Korea’s manufacturing added value stood at half the level in France, but is now 50% higher (in current dollars). Similarly, Thailand’s manufacturing added value was half the level in Argentina in the late 1980s and is now double, while back in 2010, China became the leading industrial country, ahead of the USA.

In short, while the initial situations were often close to industrial underdevelopment, the levels of industrialization in East Asia now far exceed Latin America, North Africa, India and, of course, Sub-Saharan  Africa.

INDUSTRY AS A DRIVER FOR ECONOMIC DEVELOPMENT

From Smith to Kaldor, economists have long identified and explained the driving role of industry (manufacturing) in structural change and economic development. It is based on an increase in labor productivity. In this respect, the transformations brought about by industrialization are unparalleled: the economies of scale and dynamics of the division of labor produce high productivity gains, with apparently unlimited potential; innovation focuses on industry, which is also the main area where technical progress is disseminated, before its transfer to other sectors; the long-term trend for international demand for manufactured goods is particularly dynamic, etc.

There is a close correlation between industrial production and per capita income, which is a logical consequence of this leading role of the manufacturing sector. Switzerland and Singapore, today the two richest countries in terms of per capita income, also have the highest per capita manufacturing added value in the world. While the manufacturing sector now only accounts for a small share of their GDP, it was the reason for their economic development. Conversely, the poorest countries are the least industrialized.

Consequently, the key question does not concern the direction or driver of economic development, but the implementation. The transformation of a poor and predominantly agricultural economy into a more advanced economy is based on industrial diversification. The speed of this transformation depends on the level of investment and the quality of the investment. The experiences of the Soviet Union and Maoist China show that even a massive increase in the volume of investment gives poor results if the quality of these investments, i.e. their productivity, is inadequate.

In East Asia, the take-off in the levels of investment happened early on: back in the 1970s in Korea and in the 1980s in Malaysia, Thailand and Indonesia. Krugman made an ironic comment about “growth by perspiration”, i.e. the accumulation of labor and capital, and the lack of “inspiration” of development in Asia. His criticism missed the essential point: How have Asian countries managed to mobilize so many productive resources? Why is investment so dynamic in Asia, in particular private industrial investment, whereas it is sluggish in most developing  regions?

Behind Asia’s investment and industrialization dynamics there are industrial policies which, without being the same or as effective everywhere, share several common structural features. The aim of industrial policies is to direct the economy towards activities with higher levels of productivity. Initially “in their infancy”, these industries are less competitive and less profitable than more traditional activities. Their initial lack of competitiveness means that they need to be protected and their low level of profitability deters banks and private investors from financing them. The market channels its financing towards (traditional) activities where the profits are known and attractive, rather than towards unknown or uncertain sectors. Yet the speed of sectoral change depends on the investment effort in new sectors and therefore on the financing it benefits from. Without public intervention, this will be low. 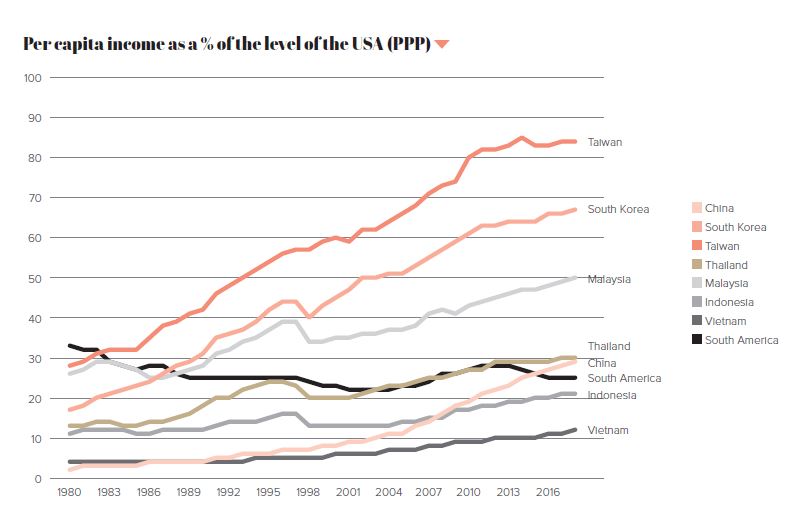 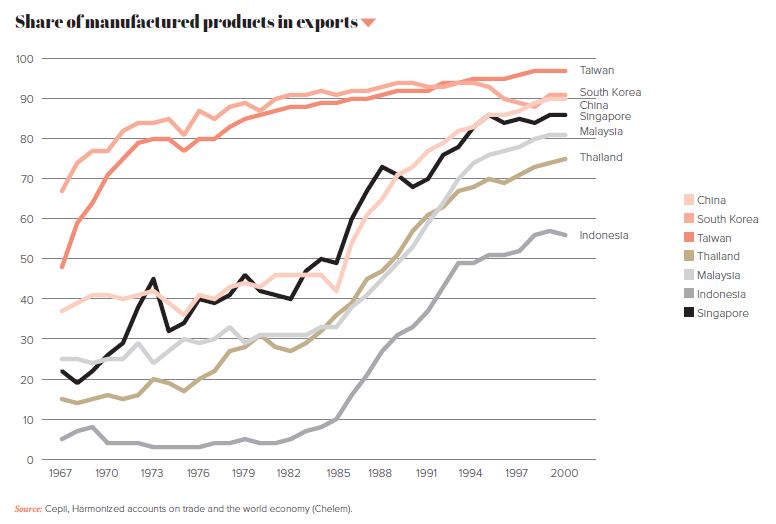 Consequently, the main challenge for industrial policies lies in providing incentives to stimulate investment in businesses in industry, when they have little experience or competitiveness, while avoiding putting them in a situation of monopoly and forcing them to improve their productivity, technical level and competitiveness. To simultaneously achieve these objectives, Asian countries have implemented series of measures, which always comprise a specific sectoral target, financial support, a dose of protection and a systematic export focus.

The “discipline” of exports has been applied with more (Korea, Taiwan) or less (Malaysia, Thailand) intensity. It reduces the usual draw- back of interventionist policies of targeting and supporting the “wrong” entrepreneurs (ineffective but close to the government) and wrong sectors (where the country does not have competitive potential), and wasting scarce resources. While industrial policies have not experienced the same success everywhere, they have been more coherent and effective in Asia than in other developing regions, particularly Latin America. From Japan to China, and including Korea, Malaysia and Singapore, East Asia offers a wide range of experiences and lessons to be learned for development policies.

These experiences confirm that it is not opening-up that brings about industrialization and rapid growth. The opening-up of West Africa and the Middle East occurred earlier and has sometimes been more marked. It is the industrial investment effort, where returns are stimulated by opportunities for opening-up, that creates the structural change and catch-up. The main issue is not the need for an industrial policy, but its implementation and effectiveness. Without this, the opening-up of trade only leads to primary specialization, in Africa and the Middle East, as well as in Argentina and Brazil.

These experiences are also a reminder that no country has emerged based only on services. In Asia, as elsewhere, no country has experienced strong and sustainable growth and achieved a high level of wealth and development without industrialization. Rapidly growing countries also have expanding industrial sectors. Similarly, to date, there has been no example of a country that has developed by a direct transition from the agriculture or primary sector towards to the service sector (with the exception of tax havens).

Under what conditions do labels support development? The example of coffee